Rahul Gandhi versus the Old Guard

Why his battle is not yet lost 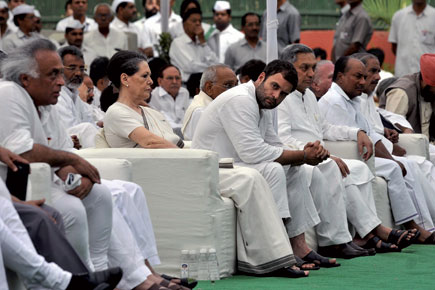 Why his battle is not yet lost

This would be a problem at the best of times; and these are not the best of times for the Congress. The party’s rout in the recent assembly elections has worsened the stand-off between Vice-president Rahul Gandhi and the party’s old guard. And his declaration that he is on a mission to overhaul the party comes just as its latest poll hammering lengthens a shadow on his leadership qualities. With hardly five months to go before the next General Election, Rahul Gandhi has a lot to prove in a short span of time.

“I think we need to start thinking about politics of empowerment,” Rahul said on 8 December once the extent of the party’s electoral defeat was revealed. “I have been saying this inside the party. I am now going to do it very aggressively in the Congress party.”

These words have been taken by many as a pointed reminder that he, rather than Congress President Sonia Gandhi, now has the final say in party matters. Not everyone within the party is pleased with this. “It’s high time Sonia Gandhi leads the party from the front,” says a senior party leader who does not wish to be named. “Ever since [Rahul] was made the party’s vice-president in January, he has put his stamp on the party with his leadership style and election management. These assembly elections were the first test of that and he has failed the test.”

In particular, the old guard fears that Rahul Gandhi’s organisational experiments of internal democracy will dissolve an inner party structure based on loyalty—from top to bottom and from one wing to another—at a time when the party’s focus ought to be on gearing up for the 2014 polls.

Those supporting the 43-year-old vice-president’s project are no less vocal. In fact, unlike his detractors, they have even started voicing their views openly. Congress leader Mani Shankar Aiyar, in an article published in The Indian Express on 10 December, went to the extent of welcoming the poll reverses, arguing that this would give Rahul Gandhi an opportunity to reshape the Congress. ‘The reason for this paradox is that for at least the last quarter of a century, my party has been in desperate need of a root and branch restructuring,’ wrote Aiyar, ‘Rahul Gandhi has promised a transformation of both the organisation and leadership of the party.’

Indeed, in the states that went to the polls recently, it was Rahul Gandhi and his team of young leaders who had a major say in everything from the selection of candidates to the management of campaigns. Following the party’s debacle in Rajasthan, Madhya Pradesh and Delhi (and loss in Chhattisgarh), with a win in Mizoram its only consolation, dissent has begun to surface within the party in the form of hints that Sonia Gandhi must take the reins of control back and return the Congress to winning form.

“The party is still in the hands of Sonia Gandhi,” said Union Minister Tariq Anwar on the morning of 8 December as vote counting began to show a gloomy outcome for the Congress. “Rahul is still second in command.” Technically, Anwar was correct, but in a party like the Congress, the mere emphasis on an obvious fact of this nature is considered a sign of resentment against the established order. Anwar’s words were soon followed—though in private conversations—by several other Congress leaders who blamed Rahul Gandhi’s style of functioning for the defeat and underlined a need for Sonia Gandhi’s own leadership.

These murmurs did not stop even after the mother and son showed up together at the party headquarters moments after the final results. In that brief encounter with the press, Sonia Gandhi acknowledged that the drubbing was a shock and identified inflation as a major reason, while Rahul Gandhi vowed to “give serious space to the common man in our processes, in our systems and in our structures” and to take “all necessary action” to overhaul the party and its way of functioning.

Rahul Gandhi’s experiments with internal democracy and his bid to restore the Congress’ pro-poor image were not an outcome of the party’s drubbing. In his own way, he has been emphatic about the need for these changes ever since he joined his mother in electoral politics back in 2004. All these years, he has insisted on a transformation through a process of political inclusion and by levelling the party’s playing fields. All along, it was clear that the project he had set for himself was one for the long haul, with the democratisation of the party’s youth wings—the All India Youth Congress (AIYF) and National Students Union of India (NSUI)—only the first of more significant campaigns to come.

All considered, Rahul Gandhi has shown greater enthusiasm for flattening the party’s top-down style of centralised command than either Sonia or Rajiv Gandhi, or any of their predecessors. In his time, Rajiv Gandhi had denounced “brokers of power” who “dispense patronage” and had turned “a mass movement into a feudal oligarchy”. He made this statement almost a year after assuming charge as India’s Prime Minister. But he could hardly take any concrete steps against the ills he had spoken of. Sonia Gandhi, on her part, set up a series of committees to review the party’s organisational structure and suggest corrective measures. All of them held up a lack of internal democracy as the party’s most serious problem, yet the fear of upsetting the status quo was so high that she could act on none of these well-meaning reports.

Rahul Gandhi began with small but concrete steps. The Congress, like other parties, is a tightly controlled body that has traditionally thrived on loyalty. Of course, the party has a constitution, but it exists more on paper than in reality. Many Congress leaders would boast that even if the principle of election is not followed strictly for the assignment of roles, the party still functions in a democratic manner, that its leaders take decisions only after listening to the opinions of other members. In one crucial sense, this is true. In many cases of selection, a two-way process has indeed taken place or at least it looks as if it has. But that is still selection, not election. A leader knows he can survive only if he has support from the top. Rahul Gandhi’s call for a transformation would turn this state of affairs upside down: with support from below no less significant as that from above.

“Rahul thinks that this may be set right,” says a senior party leader, “He is not ready to give it up simply because some party leaders do not want it. He is determined.”

If the organisational part of his reform agenda has unsettled some party members, his attempts to woo the poor and underprivileged—the social groups the party has always banked upon in moments of deep crisis—have impressed even some of his detractors. Many senior leaders of the party, even though irked by his often brash attitude to issues, agree that he has been consistent in his effort to engage the country’s poor and deprived. They also admit that this is the best way for the party to approach the General Election due next May, especially as a point of contrast with the BJP’s prime ministerial candidate Narendra Modi, who is emerging in popular perception as the favourite of big business.

Undeniably, Rahul Gandhi has been relentless in his endeavour to strike an emotional chord with the poor. At an election rally at Chittorgarh in Rajasthan last month, for instance, he had this to say: “On one side is the Congress and the other is the Opposition (read BJP). But there is a big difference in their thinking. We say this country is for everyone—the rich, the poor, businessmen, Dalits. And they say the focus should be on [a] select few. They say if the government has to run, it will run for industrialists. If you listen to their speeches, you will hear about roads, airports and infrastructure. But you won’t hear about human beings, about poor people.”

Even though this plank has yielded no gains in the assembly elections, with the party all but wiped out in Rajasthan, Madhya Pradesh and Delhi, Congress insiders feel that it does hold out hope for next year’s Lok Sabha polls. According to these insiders, it is because of this ray of hope that pressure is being mounted on the Manmohan Singh Government to align its policy framework with the party’s electoral needs.

It is unclear how close an alignment can be made in the last five months of the Union Government’s term, but what is certain is that both young leaders and the party’s old guard agree that this is the only way to ensure the viability of a credible secular alternative that could contain a BJP resurgence.

It has been proven time and again that no secular front is possible without an explicit pro-poor agenda. The urgency of it is also borne out by the fact that only a shift in the Government’s policy direction can grant Rahul the credibility needed to make the most of his plank.

In the current circumstances, promises alone—however noble they may sound—are unlikely to fetch results as they did in the past: whether it was the 1970s, when Indira Gandhi’s ‘Garibi Hatao’ worked wonders for her, or in 2004, when the party’s ‘Aam Aadmi’ slogan played a critical role in dislodging the NDA from power.

Such a policy shift would also come in handy if Rahul Gandhi wants to open a window of negotiation with the Left, which many Congress leaders believe is vital for the formation of a credible secular front. “Their words do not match their deeds,” says veteran Communist leader AB Bardhan, referring to the Congress. “This [coming together of the two] is not possible with the kind of policies they are pursuing.”

There are many ifs and buts, and Rahul Gandhi would have to think in broad terms if he wants to reform the grand old party and retain its influence over the country’s direction. His frequent meetings with CPM Politburo member Sitaram Yechury—mostly in the latter’s Parlia- ment Annexe office—are being watched silently by curious observers. Yechury will have to play a crucial role if at all the Congress and Left join forces again.

The Congress is at a crucial juncture. Its image is in ruins, its government is unpopular and its leaders are symbols of corruption and arrogance. “It’s true a number of trivial people have been attracted to the party and we have committed mistakes too,” says a senior Congress leader, speaking privately after the results, “but not all of us are scoundrels. Many of us do have noble ideals and genuinely want to make the world a better place.”

The illusionist’s art, as politics in India has been, is no longer working the way it used to. The grand old party’s problem is how to sell an illusion now that voters have seen it for what it is. And in this reawakening of the electorate lies Rahul Gandhi’s real challenge.

After all, politics matters.