The Union agriculture minister’s daughter Supriya Sule, a Member of Parliament, faces the prospect of having her Indian citizenship revoked. 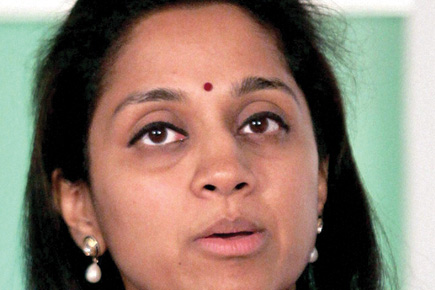 The Union agriculture minister’s daughter Supriya Sule, a Member of Parliament, faces the prospect of having her Indian citizenship revoked.


Once upon a time, Sonia Gandhi stood accused—with ‘foreign origin’, ‘dual nationality’ and other epithets hurled at her to disqualify her from Indian politics. Famously, Sharad Pawar had orchestrated a revolt within the Congress 11 years ago on that very issue, breaking away from the grand old party—one time flag-bearer of India’s struggle against colonialism—to form the pointedly named Nationalist Congress Party (NCP).

Today, the accusation has come full circle. And this time round, the issue has returned to haunt Sharad Pawar himself, NCP chief and Union agriculture minister in the United Progressive Alliance-2 (UPA-2) Government at the Centre. His own daughter, Supriya Sadanand Sule, is now in the dock. A petition (4879/2010) has been filed at the Bombay High Court under Section 10 of the Citizenship Act, 1955, that seeks to have her Indian citizenship legally revoked.

The petition was filed in April this year by Mrunalini Kakade, who contested as an independent Lok Sabha candidate in 2009 against the NCP’s Supriya Sule from the Baramati constituency. The latter won this seat, but it appears Kakade never quite conceded defeat. According to her petition, Supriya Sule holds ‘Singapore citizenship’—Permanent Resident Identification Number S 69726251—in addition to her Indian one. This is against domestic rules that do not permit dual citizenship.

The giveaway, as Mrunalini Kakade tells Open, was Supriya Sule’s disclosure that she owns property in Singapore. Under the law of that country, only a permanent resident of Singapore is allowed to purchase property there.

Supriya Sule seems to be dogged by controversy. In April 2010, she found herself loudly denying allegations of her family’s financial links to the Indian Premier League (IPL). Reports had surfaced of her family’s involvement in IPL ownership and contractual irregularities, and murmurs on this score have refused to settle down since.

Specifically, Supriya Sule’s husband Sadanand was reported to own a 10 per cent stake in a firm (via a ‘power of attorney’ from his father) that had exclusive multi-year broadcast rights for the telecast of IPL matches.

If the IPL entanglement, which has already claimed one Union minister, was not bad enough for Sharad Pawar and family, the dual citizenship row could prove inextricably ugly. His advisors have been holding heads in both hands at the terrible timing of the affair. Making matters worse for him is the agitation over inflation, much of the blame for which has been directed his way, lately.

About a fortnight ago, when Supriya Sule’s citizenship matter came up for hearing in court, Bombay High Court Justices DD Sinha and Mridula Bhatkar directed the Maharashtra government (a respondent in the case) and Ministry of Home Affairs to make a decision on the application asking why the Lok Sabha member’s Indian citizenship should not be cancelled in view of her dual citizenship. The court also asked for its directive to be acted upon conclusively within three months from the date of communication of the order.

Mrunalini Kakade, as she says, filed the petition only after a series of attempts to get information on Supriya Sule’s citizenship under the provisions of the Right to Information Act (RTI), 2005. The idea, she says, was to enforce transparency on the subject of citizenship.

Yet, it shouldn’t surprise her that many observers also consider the petition a political stunt, given the Kakade family’s political opposition to the Pawar family. Mrunalini, 35, is the wife of Jairaj Kakade, youngest son of Janata Dal (Secular) leader Sambhaji Kakade, who has been a political foe of Pawar for a very long time. A housewife, Mrunalini Kakade is evidently keen to follow in her father-in-law’s footsteps. The Kakades—Sambhaji, his elder son Viraj, and his youngest daughter-in-law Mrunalini—have unsuccessfully contested against Pawar in practically every election. Forget giving Pawar even the slightest scare in his Baramati bastion, the family has nothing resembling a vote base that it could nurture and pose as an electoral threat some time in the future.

The legal fight, though, may not be quite so lopsided. “Supriya Sule’s declaration before the Election Commission states that she owns property in Singapore,” says Mrunalini Kakade via telephone from Pune, “Besides, she is also the director of Laguna International Pvt Ltd. In this context, her nationality is shown as a ‘Singapore Permanent Resident’. If this is the case, then how can she hold Indian citizenship? Her election will therefore be null and void.”

Earlier too, she had filed a petition on the issue when Supriya Sule contested and won a Rajya Sabha seat in 2007. That application filed by Mrunalini, dated 22 June 2009, stated that since Supriya Sule had voluntarily given up citizenship of India ‘it should be declared that she ceased to be a citizen of India’.  However, the case was dismissed by the courts on technical grounds back then. Now, however, Mrunalini is more confident of a positive outcome to her latest effort.

That confidence does not stem from the much-vaunted RTI Act. The RTI route, Mrunalini sighs, led her nowhere. “Though I kept following up the matter, I was never given a reply,” she says, “In fact, both the Central and Maharashtra governments ensured that I did not get any information on the issue.”

Having realised that the investigation or inquiry was not being done by the Central government in accordance with the provisions of Rule 22 and Section 10(5) of the Citizenship Act, 1955, she wrote to the Government on 20 July 2009, demanding a committee of inquiry to be put onto the task.

This letter was written after she realised that the Central and Maharashtra governments were merely thrusting the responsibility of furnishing the information on each other. Sharad Pawar’s NCP is a coalition partner in both administrations, and if Supriya Sule ceases to be an Indian citizen, she would be liable for instant disqualification as a Member of Parliament. In terms of numerical support, this would be a setback for both the NCP and UPA.

But the ardour of their resistance seems somewhat unequal. On 1 July 2009, the Centre had written to the Maharashtra government asking it to furnish detailed discreet information. Subsequent reminders were sent by the Centre again on 13 July and 18 August 2009. When the Centre got no information, yet another reminder was sent to the state on 5 November 2009.

According to Mrunalini, both governments were using delay tactics. The Home Ministry told her that it was investigating the matter and that her application had been sent to the state government. It was her unhappiness with this ministry’s handling of the matter that made her write to it demanding an investigative committee.

The Home Ministry’s reply was that unless the state and its investigating agency provided them with a report, no action could be taken. “I persisted,” says Mrunalini, “I wanted to know about her citizenship details. Finally, in a letter dated 15 January this year, the public information officer and the clerk in the office of the Pune Collector informed me that no documents pertaining to Supriya Sule’s permanent resident status in Singapore could be found.” Sharad Pawar’s clout, to her mind, had been brought to bear on the proceedings.

When the IPL controversy broke out, Supriya Sule had vehemently defended charges against her husband and his family. When Open tried to contact her for comments on the matter of her citizenship, she was unavailable.

So, what makes Mrunalini so confident that her petition this time round will make a difference?

No one will articulate anything in clear terms. It is a legal case, after all, as mentioned above. But observers of the political arena have noticed more than a slight shift in the equation between the NCP and Congress in recent months. And the accusatory wheel does seem to have come full circle, also as mentioned at the start of this report. Reacting to Sharad Pawar’s present predicament in the context of his daughter’s citizenship question, a senior Congress leader speaks for many of his partymen in calling it “his bad karma catching up”.