Cleared in a hurry amid much fanfare, Project Cheetah now waits for funds to fly in the first consignment from Africa. But the once-lost cat stands even less of a chance in a crowded 21st century India, and its reintroduction will pose fresh challenges for other species on the brink of extinction. There may still be just enough time to scrap this dangerous experiment 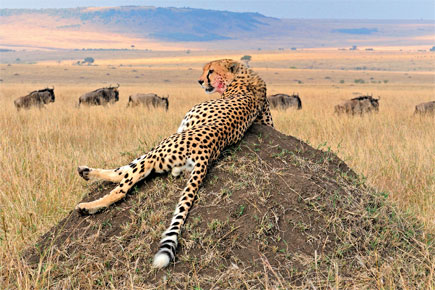 
The cheetah was officially declared extinct in India in 1952. Six decades on, the country has come a long way. The GDP has increased by 66,400 per cent. The human population has grown from 350 million to 1.2 billion. The forest cover remains the same on paper, but more than 40 per cent of it is degraded beyond recognition. Poachers have replaced hunters. Man-animal conflict has become news staple. Even tiger numbers have slipped below the 1972 level when Project Tiger was launched.

And yet, certain experts feel the cheetah could get second time lucky.

Six decades after Independence, 0.40 per cent of India’s budget is spent on environment and forests (including wildlife). So there is just Rs 800 crore to conserve 15 key species and around 650 Protected Areas. The endangered rhinos of West Bengal, their only significant population outside Assam, are not considered worthy of more than Rs 44 lakh. And the remaining 275-odd great Indian bustards await, well, a Project Bustard.

Instead, we get Project Cheetah, with a bill of more than Rs 300 crore, almost overnight.

Floated by a group of former bureaucrats and practising biologists, it was a fascinating idea. To have the charismatic cat back, watch its slender frame coiling at the precipice of motion, its spots blurring into a chase to run down an antelope in a matter of seconds, and panting ever so delicately before biting into the kill.

People loved the thought and Jairam Ramesh loved the thought of people loving it. So in 2009, the Ministry of Environment and Forests (MoEF) cleared a proposal from Dr MK Ranjitsinh, India’s first director of wildlife during the 1970s and chairman of Wildlife Trust of India (WTI), and Dr YV Jhala, wildlife biologist with Wildlife Institute of India (WII), to bring cheetahs back.

To allay fears that the project would eat into the limited government funds available for conservation, Dr Ranjitsinh gave an assurance right at the outset, in July 2009, that the proposed reintroduction of cheetahs “does not entail diverting any funds allocated by the Government for conservation of existing endangered species and habitats. No fund support is sought from the Government”.

The MoEF, however, sanctioned Rs 25 lakh for a feasibility study conducted by the proponents themselves. Three sites—Nauradehi and Kuno-Palpur in Madhya Pradesh and Jaisalmer’s Shahgarh landscape in Rajasthan—were selected as the proposed new home for the cheetahs. The Project Cheetah document was ready in September 2010.

In August 2011, the Union Cabinet approved Rs 50 crore for the cheetah programme under Project Tiger. In November, Dr HS Pabla, principal chief conservator of forests, Madhya Pradesh, sought Rs 42 crore to relocate two villages from Kuno and fly in a few cheetahs. But since Project Tiger is facing a current shortfall of Rs 281 crore for existing schemes, no funds have been released yet for the cheetah programme.

For once, few conservationists are complaining. “The viability of this project is suspect. More importantly, it is plain unnecessary. We should focus on saving what we still have and not what we have already lost,” says conservationist Valmik Thapar. Wildlife biologists Dr Faiyaz Khudsar and Dr Ullas Karanth are equally unenthused.

Cheetahs prefer grasslands and need small prey. But what the project calls grasslands in Kuno are in fact areas cleared during the past decade through the resettlement of 24 villages to create a second home for Gujarat’s Asiatic lions.

Explains Dr Khudsar: “Over time, these open patches are naturally being converted into woodland. Kuno’s chinkara (the cheetah’s primary prey) population once thrived in the pasture and agricultural land around forest villages, but is diminishing every year with the growth of woodlands. This natural ecological succession jeopardises a long- term future for cheetahs in terms of habitat and prey.”

Also, does introducing cheetahs in Kuno mean curtains for the Government’s longstanding plan to create a second home for the lions of Gir? Dr Ranjitsinh says lions can still be introduced once the cheetahs have settled down, “but not the other way round because a bigger cat will not allow a smaller one in its territory”. By the same logic, cheetahs may not be welcome at all in Kuno, which, being a part of the vibrant Ranthambhore tiger landscape, already has two resident tigers.

PCCF Dr Pabla, however, does not see any reason why all four big cats—cheetah, tiger, lion and leopard—cannot share space since “conflict is natural in the wild”. On concerns over suitable cheetah habitats, he argues that “cheetahs do live in areas other than grasslands” in Africa.

Experts also point out the absence of adequate wild prey base and presence of small livestock in all three areas marked for cheetah reintroduction. “We are looking at a high probability of conflict due to livestock depredation. Cheetahs will stand little chance against angry villagers,” warns Dr Karanth. Even packs of aggressive village dogs will be a major threat to this docile cat.

The most vocal argument in favour of Project Cheetah is that the reintroduction will help save India’s neglected arid ecology, grasslands in particular. It is inexplicable, though, why the Government needs to plant a new species when it is already mandated (and has done precious little) to protect the most fascinating occupant of the same grassland: the critically endangered Great Indian Bustard.

While examining potential sites for cheetahs, the WII-WTI team had rejected Desert National Park (DNP) because it holds “the last surviving great Indian bustard population of Jaisalmer” and “putting the cheetah in with the bustard cannot be contemplated at all, because of the threat to this most gravely endangered bird”.

By the same logic, bustards will have no chance of recovery in any of the potential cheetah reintroduction sites—all are potential bustard habitats, which were once part of the bird’s range.

But Dr Ranjitsinh is not worried: “We are not putting cheetahs in DNP where bustards now survive. If the bustard population recovers and birds disperse to other areas, well, they will have to deal with cheetahs.”

A member of India’s National Board for Wildlife warns against this “couldn’t- care-less” approach: “We have an ex- bureaucrat of former Gujarat royalty, who is seen on YouTube talking about his childhood dreams to bring back cheetahs. Another former Gujarat royal, a top biologist, is desperate for the project, perhaps because he was left out of the Sariska [tiger] reintroduction due to WII politics. But personal ambitions can’t justify random introduction of a species.”

Counters a senior Madhya Pradesh forest official: “The resistance is mainly from India’s many tiger experts, who hog all the limelight in our tiger-centric conservation milieu. Once cheetahs are in, the media focus will shift, even if partially and temporarily. The project is already making big news.”

Media hype apart, Project Cheetah is losing support outside Madhya Pradesh, with an increasing number of experts and organisations recognising the dangers of the programme. The Rajasthan forest establishment was sceptical from the beginning and is yet to submit any plan for the Jaisalmer leg of the project. Even Dr Ranjitsinh’s WTI has developed cold feet. Confirms the NGO’s senior director Dr Rahul Kaul: “Dr Ranjitsinh is in the project in his personal capacity; the WTI has nothing to do with it anymore.”

The message is clear. With funds yet to be released, the MoEF still has an opportunity to rethink and scrap the cheetah project. It is one thing to reintroduce a lost species and lose it all over again, quite another to risk other barely surviving species in that experiment.