Prisoner of an Image

Why no one speaks for Abdul Nasser Madani, the ailing politician who has been kept behind bars for years on evidence that is suspect, and how reporting on him made me a target of the Karnataka police 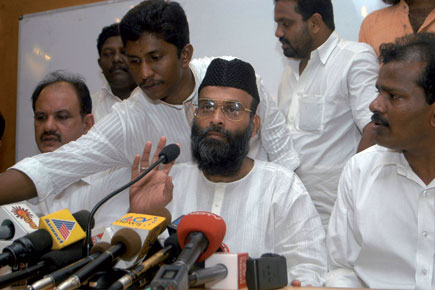 Why no one speaks for Abdul Nasser Madani, the ailing politician who has been kept behind bars for years on evidence that is suspect


Two years ago, I did a story in Tehelka titled ‘Why is this man still in prison?’ It is a question that has still not been answered. Abdul Nasser Madani, a political leader in Kerala and the thirty-first accused in the 2008 Bangalore blast case, remains in jail without bail even though he is a wheelchair-bound chronic diabetic and there are strong indications that the evidence against him is fabricated. Two of the prosecution witnesses, quoted by the police as having witnessed Madani conspiring with a Lashkar-e-Toiba commander to carry out the blast, had told me that they had not seen Madani ever.

It was towards the end of the 1980s that Madani became a dramatic figure in the public life of Kerala. He was a charismatic religious scholar with an extraordinary oratorial flair. He became a crowd puller at a very young age, and had a huge fan following among Muslims. In 1991, he formed the Islamic Seva Sangh (ISS) in response to the riots that took place in Bhagalpur and Kerala following LK Advani’s rathyathra. Among secularists, Madani had no legitimacy and was perceived as just a reactionary counterpoint to the RSS.

Listening to his speeches and spotting his images in newspapers was suffocating and scary to me in the early 1990s. He demanded women cover their bodies. As a Muslim woman, I found it intimidating though I had distanced myself from religion. In course of time, I witnessed Madani metamorphose into the role of a wise politician who called for the emancipation of marginalised and oppressed communities like Dalits and Other Back- ward Communities, besides Muslims. The ISS was banned in 1992. When the Babri Masjid was demolished and unrest spread, Madani did not wait for the ban to be lifted. He disbanded the organisation and formed a political party called the People’s Democratic Party (PDP). It was something new to the state, which had traditionally had the limited option of oscillating between the Left Demo- cratic Front and the United Democratic Front. In the November 1993 by-election to the Ottappalam Lok Sabha constituency (the seat had been vacated by KR Narayanan, who moved to become President of India), the PDP supported the Left. Madani’s public life came to a temporary end in 1998 with his arrest by the Tamil Nadu police for his alleged involvement in the Coimbatore bomb blasts the same year.

None of the charges against him were proved and he was acquitted in 2007. But spending nine-and-a-half years in jail as a trial prisoner changed him. The old Madani who delivered belligerent public speeches was gone and the new one turned out to be serenely democratic, non-violent and peaceful in his political discourse. Madani was embraced by the CPM, and a new alliance was born, which would later prove costly for both. Madani could never live down his image of a man who misguided Muslim youth through inflammatory speeches.

In 2009, the Malayalam media was flooded with stories about the complicity of Madani and his wife Soofiya in a few cases that allegedly had terror links. The stories had the typical characteristics of crime reporting with information based largely on ‘highly placed sources’ with no substantiating evidence. This display of antagonism by the media was later interpreted by Kerala’s Left intellectuals as an expression of discontent towards the CPM for allying with the PDP in the 2009 parliamentary polls. Their telling defeat in that election made the CPM believe that the PDP factor had been ruinous to the party. From then on, they kept a distance from Madani. When the Karnataka police arrested him in August 2011, the CPM was in power but it chose to maintain a strategic silence.

The charge against Madani was that he had conspired with T Naseer, reportedly LeT’s south Indian commander, to carry out the 2008 Bangalore blasts. Even before the arrest, Jose Verghese, one of the prosecution witnesses against Madani, had filed a complaint in the National Investigation Agency court claiming that his testimony was forged. He was the owner of the house in Ernakulam that Madani had got on rent after his return from Coimbatore jail. In an interview given to me in 2010, Verghese disclosed why he had gone to court disclaiming his testimony. The police arrived at his house in Kochi (the one rented to Madani, though he had moved out by then) and he was asked to be present. They had brought along a man whose eyes were covered with a piece of cloth. The police told Verghese that the man was LeT commander T Naseer. He was asked to sign a document written in Kannada and told that it was just a statement of their visit and examination of the place. Later, Verghese learnt from the media what the document said—that he had seen Madani and Naseer at that house ‘conspiring to carry out the blast’. Another witness, MM Majeed, a former PDP worker who had testified that he had seen Madani with Naseer, had terminal cancer and was on his death bed on the day the police claimed to have recorded his statement. Another witness was Madani’s brother, Jamal Ahmed, who also moved a complaint in court against the Karnataka police for cooking up a witness statement supposedly made by him.

Till recently, the media and political parties in Kerala had kept mum about these obvious holes in the police charges, and Madani remained a taboo topic for years. Public memory of the case was revived largely through the efforts of the few who continued to argue for the human rights of prisoners. According to his lawyers, his bail pleas have been rejected more than a couple of times on insufficient grounds. According to people who visited him in jail, Madani’s health deteriorates day by day. He moves in a wheelchair ever since he lost one of his legs in the 1993 bomb blast at a public meeting, carried out allegedly by the RSS. The accused in that case were acquitted in 2009 after Madani refused to identify them in court declaring that he did not believe in revenge.

Repeated pleas from his relatives and lawyers to facilitate his treatment had till recently got no result. A recent medical report said Madani has almost completely lost his eyesight. In an open letter to the media, sent from jail, Madani said the authorities had refused to take him to hospital even on producing a medical report that stated he was suffering from acute diabetic retinopathy. The doctors had advised continuous medication and weekly check-ups, but he was only taken to a doctor after a lag of seven months. “His health is critically bad. He has swellings on his legs and face, which is a typical symptom of kidney trouble. One surgery has been conducted on his nose, which has developed an acute infection due to high blood sugar. His nose is plastered. He told me that he has terrible pain in the amputated leg,” says MA Baby, CPM Politburo member and former minister of Kerala who recently visited Madani in jail.

Leaders of the Indian Union Muslim League—a party that had never offered any comment on the false witnesses in Madani’s case—visited him in jail and are now demanding that the government safeguard his human rights. Kanthapuram AP Aboobacker, a prominent Muslim community leader in Kerala, called on the Karnataka home minister and demanded justice in Madani’s case. The CPM too has finally broken its silence. Party leaders visited Madani in jail and expressed grave concern about his health. They demanded that he be shifted to a hospital at the earliest. “We suspect that the evidence against him is fabricated,” said MA Baby to the media while exiting Bangalore’s Parappana Agrahara prison. Even Kerala Chief Minister Oommen Chandy has expressed concern. In a meeting with his Karnataka counterpart, Jagadish Shettar, Chandy urged him to ensure medical treatment for Madani. Malayalam news channels have brought back the Madani case on their primetime bulletins, and such pressure has led to some results. Earlier this month, the trial court ordered that Madani be shifted to hospital and granted permission to his wife and son to stay with him. He was finally moved to a private hospital for treatment last week.

What Madani demonstrated in politics was never a model. As a political party, the PDP was a grand failure. It is a nondescript entity full of Madani followers rather than a party with a mass base. In the absence of Madani, the party had no way of surviving or exerting any influence. However, his case is unique: the media always treated him with suspicion; he was imprisoned for a decade, later found innocent, re-arrested and imprisoned.

My own story runs parallel to Madani’s. I recorded the conversation with the fake witnesses against Madani on a hidden camera. After the story was published, I was booked for ‘intimidating the witnesses’ despite the visuals showing them voluntarily telling me everything. For a long time, I travelled to Bangalore every 15 days to present myself before the investigating officer. This was the condition on which I had been granted anticipatory bail by the Karnataka High Court.

When I was framed by the Karnataka police, a couple of newspapers reported the police version as is, without even attributing it to a source, making it look like the charges against me were genuine. Many fellow journalists from my previous stint as a television reporter stopped calling me. Contrary to the conspicuous silence maintained by newspapers, Malayalam weekly magazines came up with cover stories, correctly identifying it as a violation of freedom of the press. A few days ago, a chargesheet was submitted in my case and phase two of the legal battle has begun. I am back to giving interviews to news channels, delivering speeches at public meetings, talking about how people are being framed and how bleak the prospects are for a truly free press in the country.