It is reshuffle for one and Ram for the other, but the Congress and BJP are both at odds with the public mood 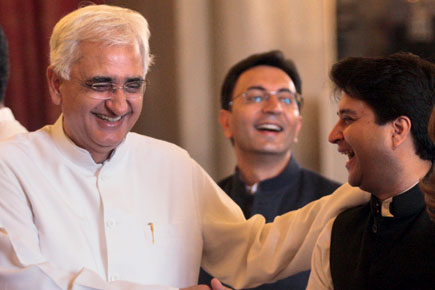 It is reshuffle for one and Ram for the other, but the Congress and BJP are both at odds with the public mood


Primetime television is not strong on irony, but when Vir Sanghvi on Headlines Today spoke approvingly of the resurrection of Shashi Tharoor in the recent Cabinet reshuffle, it was difficult to suppress a smile. On a day when the Congress confirmed what everyone, bar some loyalists in the media, had suspected for a while, that the party had totally lost touch with political reality, it was a welcome moment of relief.

The Congress, as we have repeatedly argued in Open, has confused the symptom for the problem while dealing with the public anger against corruption. It seems to believe that Anna and Kejriwal are the source of this anger. But the party should remember that the 2G scam, Commonwealth scam and Radia Tapes actually preceded Anna and Kejriwal.

Only a party in decay could have sent out the message that this reshuffle conveys. Consider Tharoor’s resurrection. He was back on TV, smirk in place, but without the cows lick, telling us that he never did do anything wrong. And that it was the media that created the controversy that led to his ouster. He still seems to see no problem in making phone calls on behalf of a business in which his wife had equity. If standards of probity in public life are to mean anything, then the proper course would have been for his wife Sunanda Pushkar to give up her equity before Tharoor intervened in the matter, or for Tharoor never to have got involved.

At the very least, Tharoor was guilty of gross impropriety, which is why the party was forced to act at the time. Is he then back because the Congress’ idea of impropriety has changed, now that it finds itself faced with similar charges against Robert Vadra? The party may be convinced that Tharoor and Vadra are innocent, but the evidence suggests not. This conclusion is not partisan. Many of those who have no liking for the BJP or the kind of crudity (typical of the man) Narendra Modi indulged in while referring to Pushkar on Twitter, share this view.

The elevation of Salman Khurshid expectedly invited the most media comment. While Khurshid would rather not discuss charges that forged documents were used to justify the work done by the Zakir Hussain Memorial Trust run by his wife (since the matter is in court, actually in several courts), he really has no defence for his subsequent boorishness. This is not the first time that serious questions are being raised about Khrushid’s conduct in public office. During the furore over the 2G licence allotments, it turned out that Khurshid as Minister for Corporate Affairs oversaw the clean chit given by his ministry to Anil Ambani over Reliance’s holdings in Swan Telecom.

Once Anil Ambani’s name is invoked, it is difficult to leave Mukesh Ambani out. It has been suggested in the media as well as by the opposition that he is responsible for Jaipal Reddy’s ejection from the Union Ministry of Petroleum and Natural Gas. Whatever the details of the workings of this ministry, the ouster again suggests the Congress is oblivious to public perception. Does the party not remember the statement by Ranjan Bhattacharya, foster son-in-law of Atal Behari Vajpayee: “Mukesh said, ‘Haan yaar, you know Ranjan, you are right, ab toh Congress apni dukaan hai’”?

Another man who found mention on the Radia Tapes, Kamal Nath, has been given additional charge of Parliamentary Affairs. Tarun Das, former director general of the Confederation of Indian Industry, referred to him on the tapes: “He is a doer, you can make your 15 per cent on this, you can do national service and also make money, you know what I mean.”

This, then, is the reshuffle that is supposed to presage Rahul Gandhi’s assumption of a greater role in the Congress party. It is the worst signal that he and his party could have sent out. It suggests that public opinion on corruption does not matter to him or the party.

Given the brazenness with which the Congress went about this reshuffle, it has got off rather lightly in the media. In the wake of the Indian media’s failure to take up the Vadra case till Kejriwal highlighted it, it makes sense to look at this response. The great surprise was the ease with which senior TV anchors such as the otherwise restrained Rajdeep Sardesai welcomed Tharoor’s ‘well deserved’ return to the ministry. This is in keeping with Karan Thapar’s ‘I have known him since I was 21’ defence of Salman Khurshid.

Blame this on Delhi. When journalists and politicians spend evenings together socialising and have been to the same colleges, objectivity suffers. There is a class of politicians who have managed to evade the kind of scrutiny we routinely apply to other politicians simply because they come from the right schools and right families and take care to befriend the right people in the media.

Tharoor, Khurshid and Kamal Nath epitomise this phenomenon, but they are only the precursors to the vast majority of the Congress youth brigade who consist of second or third generation politicians. These politicians can play to the English-speaking middle-class, sound good on primetime television, yet behave like feudal overlords on home turf. Any journalist who has covered a Scindia election in the Gwalior region will be aware of this phenomenon, which is also true for the large number of Rajput princelings who inhabit various parties. Which is why Salman Khurshid’s defence that he was reciting Bismil and Frost in the course of the speech where he is alleged to have threatened Arvind Kejriwal does not stand. A reporter from The Sunday Guardian, who travelled to his constituency of Farrukhabad after the allegations were reported by Aaj Tak, has written of how he was threatened by a group of men who realised he was investigating the Zakir Hussain Memorial Trust. The new leadership of the Congress is our counterpart to the democratic oligarchs of Pakistan. When Hina Rabbani Khar and Salman Khurshid meet, the border will truly be irrelevant.

At sucha a time, the BJP as the main opposition party should be gaining by default, but the charges against its president Nitin Gadkari have silenced them. In such an environment, organised communal violence against Muslims in towns around Ayodhya, as reported by Dhirendra K Jha in this issue, seems to have come at the right time for the party. Both LK Advani and Mohan Bhagwat have started referring to the Ram Mandir in their speeches once again. An election campaign is underway in Gujarat, and amid all the talk of Modi and development, which is more hype than fact, this violence is the real reason to fear what he stands for.

Swapan Dasgupta (and it is appropriate to end a piece that began by referring to Vir Sanghvi by invoking Dasgupta) argues in a recent piece in The Hindu that ‘Modi threatens the cosy somnolence of bipartisan deal making involving the main political parties’. Modi threatens much more. The Indian electorate’s choice cannot be between corruption and communalism. Both are a sign of decay and rot. But then, I last met Dasgupta in Ahmedabad in 2007 during the previous Gujarat elections where he was preparing election material in the office of Arun Jaitley who was there to aid the Modi campaign.