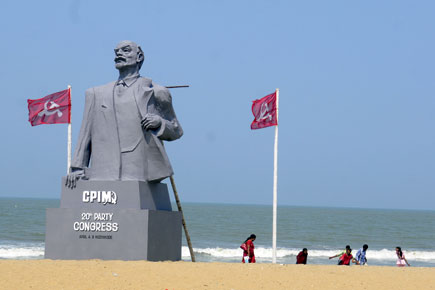 
THIRUVANANTHAPURAM ~ The decision of the Communist Party of India- Marxist (CPM) to keep VS Achuthanandan out of its Politburo—newly formed after its 20th party congress recently held in Kozhikode—once again betrays its inability to reconcile its organisational practices with mass aspirations. VS, as the octogenarian is commonly known, is the party’s seniormost leader in Kerala and chief of the opposition in the state’s Assembly. Time and again, the CPM has been happy to use the ‘VS effect’ to win votes at election time, even though a dominant section of the party scoffs at this as a ‘bourgeois political strategy’. But when it comes to ‘breach of organisational discipline’, of which he has been accused, the party is equally happy to forget all about public perceptions and electoral popularity.

A dejected VS, who was expecting to be re-inducted in the Politburo after being expelled from the CPM’s apex leadership body two years ago, did not even wait for the closing ceremony of the party congress. He left the premises in a huff. “The new Politburo is capable enough to lead the party, the media does not have to worry about it,” VS told mediapersons before boarding a flight to Thiruvananthapuram on 9 April. Though he did not verbalise anything against the party leadership, his hints were abundantly clear: his struggle was not over yet.

What VS’s new move would be remains a matter of speculation. It is clear to everyone in the party that his being denied Politburo membership, despite having led his party in Kerala to a near victory in recent Assembly polls (the Congress-led UDF won by only a whisker), represents a buckling of the central leadership under pressure of Pinarayi Vijayan, his bête noir and parallel party force in the state.

What makes his exclusion even more glaring is the fact that Buddhadeb Bhattacharjee, who did not even turn up for the party gathering in Kozhikode (citing health reasons), retains his Politburo seat. This, despite the fact that West Bengal’s former Chief Minister is seen by those at the helm as solely responsible for the loss of that stronghold after nearly four decades in power. An organisational report presented at the party congress (of which Open has a copy), categorically states that ‘the administrative and political mistakes committed in West Bengal with regard to land acquisition proved costly’. The report also says, ‘The image of the Party among the people (of West Bengal) has been dented by highhandedness, beaurocratism (sic) and the refusal to hear the views of the people. The existence of corruption and wrongdoing among small strata of party leaders due to the corrosive influence of a ruling party also was resented.’

In sharp contrast, by the party’s analysis, Kerala hardly experienced any anti-incumbency in its polls. The CPM’s fight against corruption, a project led by VS, had actually worked well in its favour. The organisational report makes a mention of a graft case pursued by VS for well over two decades (without much backing from his party, it must be added), that eventually led to the Supreme Court’s sentencing of a former UDF minister, R Balakrishnapillai.

It is clear that the CPM has acknowledged the electoral contributions of both former chief ministers—Bhattacharjee’s to the party’s deafening defeat and VS’s to its surprise resurgence at the hustings. Yet, when it comes to party matters, as has often been the case under General Secretary Prakash Karat, arcane ideological issues—often suspected to be a cover for personal rivalries—are seen to take precedence over mundane matters of electoral appeal.

Sources close to the central leadership of the party say that on the closing day of the congress, Sitaram Yechuri and Manik Sarkar, two other senior Politburo members, raised questions about the constitution of this apex body—referring, no doubt, to VS’s exclusion. Karat, however, defended the decision by citing stiff opposition from the CPM’s Kerala leadership (Vijayan, that is) against the inclusion of VS, and said that the final decision was left to the party’s Central Committee (CC), another decision-making body.

Interestingly, sources reveal, the CC was willing to consider an amendment of party procedures to offer VS a golden handshake, thus having him bid goodbye to the CC itself, of which he was (and is) a member. VS supporters on the committee had to sweat it out just to retain him.

Likewise, party sources suggest that those who opposed the inclusion of Bhattacharjee in the Politburo were given a similar explanation by Karat on why he was retained: that the central leadership could not ignore the West Bengal party unit’s views on the matter, and that it was keen on his retention.

Such explanations also suggest that the central leadership is losing its power. For all the lofty talk about ideology, contend observers, by giving in to these state units on their respective agendas, the party has effectively deviated from its ideological stance of democratic centralism in favour of federalism. Party sources also say that there had been much criticism of Karat by delegates from West Bengal at the congress on many issues.

The setbacks suffered in the Lok Sabha and Assembly polls after the Left’s withdrawal of support to the UPA-I Government at the Centre over the Indo-US Nuclear Deal were discussed at length. But in the party’s analysis, as Karat emphasised, the decision was correct. The organisational report observes that the decision should have been taken a few months earlier, without letting the Government get a chance to go to the International Atomic Energy Association for talks. However, party sources reveal that CC members who’re close to the former Chief Minister of West Bengal do not subscribe to this view. According to them, the withdrawal of support was the key factor in the defeats that ousted the party from power in Kerala and West Bengal.

At the end of the CPM’s deliberations in Kozhikode, the Politburo does seem oddly composed. Bhattacharjee, the man who has been constantly evading CC and Politburo meetings for over two years, the man who’d rolled out a red carpet for capitalists, the man who expressed resentment of strikes (which he admitted as a mistake later), the man who oversaw disastrous evictions of common folk from land in Nandigram and elsewhere for corporate use (admitted as a mistake by the party later), is in. VS, the man who fought against corruption, the man who oversaw evictions of private firms occupying state land illegally, the man who integrated grassroots politics with a broader vision, is out. The CPM cannot easily explain this paradox. But it does signify a profound confusion in what the party believes in and stands for.

On his part, whether VS succeeds in fighting the odds remains a matter of debate within the party. Many believe that VS is no longer on firm ground, with Vigilance cases of wrongdoing pending against him and his son. Besides, some also believe that there has been an erosion in his own support base among intellectuals and women’s groups, some of it caused by his embarrassing ‘anti-women’ statements fired against foes recently. The Kerala unit of the party (in which 12 of 14 district committees are dominated by his rival faction) is in no mood for reconciliation.

The organisational report adopted in the Kerala state conference of the party was a virtual chargesheet against VS, detailing his ‘anti-party activities’ and floutings of discipline point by point.

It is fair to conclude that the space for a ‘VS brand of politics’ is diminishing in Kerala. If you read the organisational report, you could come away thinking that the CPM is fast becoming a non-proletarian party. Says the report: ‘It remains a matter of serious concern that the recruitment of party members from [among] workers and employees is lagging much behind. This is reflected in the abysmally low percentage of workers [in what is primarily a] working class party.’