Perils of the Backward Fetish 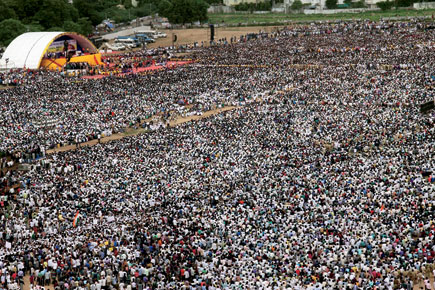 The ongoing agitation by Patidars—or Patels—in Gujarat for securing Other Backward Class (OBC) status is aimed at enjoying the benefits of reservation, which brings in more power and influence. There is something very significant about this protest that has turned violent and acquired great momentum in the state and will have great repercussions elsewhere in the country.

For all practical purposes, the stature of being an OBC is now much more coveted than the mere ritual status of being a member of an upper caste. This is thanks to the upward mobility of a good chunk of OBCs who are now in direct competition with the once-powerful upper castes for more power in the bureaucracy, politics and the economy. For several castes, their OBC status has, over time, brought in enormous perks, influence and power—and therefore an OBC quota is a big asset as opposed to ritual, higher caste positions. Now, many so- called upper castes also want to get hold of that ‘asset’. Mind you, it is not so much for economic reasons but for political gains and to have a greater representation in the bureaucracy.

Over the past decade, several upper castes have been clamouring for OBC status—which is proof that it has become a much-sought-after tag to reassert caste dominance in government and elsewhere. Consider this: rural political power used to be largely in the hands of dominant upper caste communities for a long time. Lately, it has been changing, and rapidly. Thanks to reservation in jobs and education for OBCs, many not-so-dominant castes have been able to attain greater social status. Some of them—like Ezhavas in Kerala—have forged ahead in the social hierarchy to the extent that they exert tremendous influence in politics, society and business. There are such castes in Maharashtra and states in the north as well. And that is what had prompted castes such as Gujjars, Jats and others to stake claims to being included in the OBC list. The main idea was to retain power in the country side.

To me, the agitation by Patidars, in character and culture, is a kind of anti-reservation movement. It has memories from the past. Gujarat, as we all know, has a long history of massive protests against the quota system. When Dalits were given reservation in promotions, there were widespread riots spearheaded mainly by Patidars. In 1985, they were at the forefront of an anti-reservation stir against the new grant of quotas by Chief Minister Madhav Singh Solanki to OBCs. Solanki, who had created a vote bank of Kshatriyas, Harijans, Adivasis and Muslims (KHAM) for the Congress party, had to finally step down as Chief Minister in the face of strong protests from Patidars, who have over the decades veered towards the BJP.

To be sure, there is an aspect of ‘grievance’ to these protests which I am sure will have a nationwide impact sooner or later. The reason is that both democratisation and reservation have successfully created a level-playing field for those discriminated against in the past thanks to the stratification of our society for centuries along caste lines. Communities that were oppressed and had lost the initiative for social life—and were not in a position to compete with others—stood to benefit a lot from the quota system. In the long run, many OBCs got more bureaucratic power than the dominant castes of five decades ago. The concomitant loss of social power for upper castes meant that communities like Patidars found that their domination was under serious threat—in Gujarat alone, communities like Prajapatis and others were looked down upon before they got more bureaucratic power thanks to affirmative action.

All this led to unintended consequences such as perceptions of injustice among upper castes. They realised that they can no longer encash their ritualistic power. Which is why they want power—when they see these upwardly mobile castes have got such high political and economic status—through the quota route. They are struck by a sense of wounded pride because some of them have to now seek a favour or two from a member of a community they had despised and denigrated just a few decades earlier.

I was a member of the first National Commission for Backward Classes in the 1990s after it was formed. There were two reasons why it was formed: one, to include those who are genuinely backward in the OBC category. The second was to identify groups and communities which have ceased to be backward over the years. And that means communities that were backward had to be included on the list if they were not already OBCs. It also called for an ‘exit policy’—of withdrawing quota benefits to certain communities that have overcome their backwardness through reservation in jobs and education. In that context, the recent inclusion of Sipai and the Patni Jamat or Turk Jamat on the list of OBCs is commendable. However, no government had so far had the political will to rid the OBC list of communities that are no longer backward by any stretch of imagination—and that too nearly 20 years after the Supreme Court issued a verdict on the need for such a step.

The current protests in Gujarat by Patidars will lead to a national surge because there are castes across the country with a similar set of grievances. It is important to analyse and understand how a 22-year-old man, otherwise seemingly inept, could organise such a mammoth protest. There must be ‘handlers’ behind all this and there must be tonnes of cash behind this agitation. But then there is no doubt about the fact that the agitation is anti-quota and also anti-Narendra Modi. Yet these protests will have far-reaching consequences, however flawed its theoretical underpinnings are. Protests will erupt soon in other states, too, over similar discontent. After all, economic backwardness is a subject that needs to be considered with greater focus and vigour as many backward communities have seen a good chunk of their members embrace prosperity. The Government needs to reconsider its priorities while awarding quotas and overhaul our reservation system by updating itself on the backwardness of various communities.

I believe that the immediate denouement of the Patidar agitation— whether it fizzles out or not—is that it will impact the dominance of the BJP in Gujarat. Politically, KHAM will be reconstituted in the state that been under Modi’s spell for a while. The kind of social coalition that Solanki had engineered in the 1980s will re-emerge and is destined to weaken the BJP in its stronghold. Let’s not forget that Hindus are not the kind of people who can be held in thrall to the spirit of Hindutva alone for a long time. Historically, among Hindus, such a spirit has been seen to dissipate in a short period.

I would describe the phenomenon that has badly hurt the system of reservation in India as ‘pure cynical politics’. Despite the emergence of communities—like Marathas and others—to dominance, political parties of all hues have routinely refused to acknowledge the new social injustice—of so-called upper castes getting edged out in various spheres by some former backward communities that have for long ‘self-exited’ from their state of indigence and disadvantage. Definitely, reservations in jobs and educational institutions have done a great justice to the democratic processes of the country. The quota system shouldn’t be scrapped. But it should be rationalised.

(DL Sheth is a renowned political sociologist. He was in conversation with Executive Editor Ullekh NP)