The courageous struggle of three women to expose corruption in a remote Meghalaya village, even as long-protected tribal traditions begin to be held to account by the Right to Information 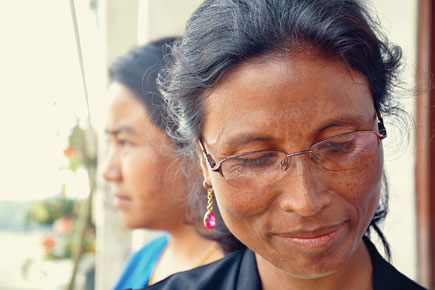 
When Fatima Mynsong and her friends Acqueline Songthiang and Matilda Suting were ostracised by their village for exercising their Right to Information (RTI), as guaranteed by an Act of Parliament by that name, they created headlines in Shillong, for this was the first such case in Meghalaya.

The three women of Jongsha, a quaint little village 30 km from Shillong, were shocked by the treatment meted out to them for pursuing what was clearly a just cause, but they dug their heels in for the long haul, and eventually managed to have the man responsible for their ostracism, the village headman, ejected from his post. Not just that, they also drew attention to a pattern of malpractices under the Centre’s National Rural Employment Guarantee Act (NREGA) scheme. In their halting English, the three tell their story.

It all started in 2008, when Fatima, a member of the local Village Employment Council (VEC) overseeing the muster rolls of labourers—Matilda and Acqueline among them—working on NREGA projects, found some discrepancies in some of the scheme’s implementation records. “Many labourers approached me with complaints that they were not receiving their wages regularly,” Fatima says. It bothered her to distraction. “I couldn’t work in such an environment. These labourers were dependent on the wages for their daily livelihood.” When she sought a clarification from higher-ups, she was ignored by the village headman and other members of the village darbar.

That is when Fatima, along with Acqueline and Matilda, decided to launch a fight against corruption. “At first, we formed a committee with all other labourers, conducted a meeting, and appealed to the local Block Development Officer to intervene,” recounts Acqueline, “When the BDO did not respond, we filed an RTI [application] asking for details of the scheme—the materials purchased, money paid to labourers, etcetera.”

As suspected, a pattern of anomalies showed up in the reply. One labourer, they found, had three job cards to his name, while a few others were getting double the regular pay. They also found that materials had been bought at rates higher than those prevalent in the market. As for the social audits mandated by the law, they had simply not been done.

Based on this specific information, the trio went back to the BDO’s office and submitted a detailed complaint. Again, there was no response, let alone any action taken. Next, in October 2008, they appealed to the project director of the District Rural Development Agency (DRDA). But it was only after they knocked at the door of the State Information Commission (SIC) that they finally got a hearing. Taking note of the anomalies, the SIC directed the DRDA to take corrective action. Encouraged, in April 2009, Fatima, Acqueline and Matilda also raised the issue directly with the agency, which conducted an inquiry on 21 May. But there was more frustration in store for them. “Once the inquiry was conducted by the DRDA, they did not share its findings with us and the villagers,” says Fatima, “We again had to resort to an RTI to access the inquiry report.”

And then, one fine day in 2010, they opened a local newspaper and found news of their ostracism; their community, as a report declared, had ex-communicated all three. “The news came as a shock because they did not tell us directly,” says Fatima, “Instead, they chose to announce it through a newspaper.” Now, a social boycott is one thing, but in a remote Meghalayan village, ostracism can have harrowing practical consequences. The three found themselves denied essential food supplies, which are under the control of the village headman, for example. Fatima’s family survived on food bought in the open market with her husband’s salary. However, Acqueline and Matilda had a rough time. Not only did they lose their PDS rations, their husbands, also daily-wage labourers, were denied work in Jongsha and had to travel far just to earn enough cash to get by.

Though Karmelin Rynjah, the headman at the time, defended the ostracism saying that the entire village endorsed it, many villagers were worried at the three women’s plight. “We got quiet support from all the labourers,” says Acqueline, “But people who were close to the headman refused to talk to us.” For a while, they were turned away from other government services too. “Initially, they were not even allowed to use public transport,” says Rita Mynsang, Fatima’s sister, “It was only after the local press mounted pressure that they could board buses again.”

They knew they had a bigger fight on their hands than they had bargained for. “We decided to approach the Meghalaya RTI Movement for help,” says Fatima. Soon, other human rights groups had taken up the case too. Word got around. “When we heard that the women faced a social boycott in their village, we decided to summon the BDO, the village headman, and the concerned women,” says Susanna K Marak, chairperson of the Meghalaya State Women’s Commission, “The headman claimed that he was not aware of the RTI Act. We explained that it is a woman’s fundamental right to ask for information. The ban was then lifted.”

It was a month before the three were allowed their food rations again, but their fight did not go in vain. A government inquiry found all their allegations to be true. Local NREGA project records were full of glaring deviations from the prescribed norms. Signatures had been forged, job cards issued improperly and funds siphoned off, among other things. The village chief, popularly known as the ‘king’, sacked the village headman and took direct charge.

The long overdue social audit has also been initiated. However, the three RTI activists are not claiming victory yet. Despite some VEC members being indicted for misappropriation of funds, no criminal action has been taken against them so far. “We feel very demoralised by this,” says Fatima, “Our fight won’t end till the guilty are arrested.”

“This is a big problem,” says Tarun Bharatiya of the Meghalaya RTI Movement, “The district administration is going slow on demands to resume projects.”

To the dismay of observers, Jongsha’s example seems to have hardened attitudes across Meghalaya towards those who speak up against injustice and corruption. Perversely, cases of ostracism have gone up. This July, 17 families were cast out by Mawsynram village, East Khasi Hills district, for exercising their right to information. They wanted to know what rule barred them from access to State supplies of food.

Women, fears Susanna Marak, are all the more vulnerable. “As a women’s commission,” she says, “we do want to do something about it.” That women are soft targets of social strictures is not a surprise, despite the matrilineal traditions of Khasi society. Casual observers may expect such a society, with property and other titles passed along a line of female descendents, to hold women in high regard. In practice, however, men wield utmost authority. “Under the traditional Khasi system, women do not have any political power,” says Mayfereen Ryntathiang of Grassroots, an NGO, “They only enjoy custodian property rights. Even if she ‘owns’ a house, she has to consult her maternal uncle in case of repairs etcetera, and he takes the final decision.” But women are turning assertive.

What Meghalaya now faces is a battle between tradition as an inheritance and information as a right. “Ostracism has always existed as a means of punishment in traditional systems,” says Bharatiya, “For instance, if someone cuts a tree illegally, s/he is punished this way. Tricky situations arise when people within a traditional system start raising questions over their [lack of] access to modern schemes. This is often misconstrued as challenging traditional authorities.”

Meghalaya is governed under the Sixth Schedule of the Indian Constitution, which, as a measure to ringfence tribal traditions against external interference, vests Autonomous District Councils (ADCs) with special legislative, administrative and judicial powers. But local reformers are fed up of such governance. “One fundamental problem lies in the election of village headmen,” says Michael Syiem, a leader of the Meghalaya RTI Movement, “They have no fixed tenure, and are selected by a vote of hands. This is undemocratic, and we have been demanding secret ballot polls. Also, women are not allowed to vote. This is changing in some places, albeit very slowly.” Since village headmen control Central funds, “They come under the purview of the RTI Act,” adds Syiem, as do all ADCs and traditional chiefs, as the SIC stated in 2010.

Yet, this is not a simple story of tradition versus modernity. As Bharatiya points out, Jongsha’s guilty are being shielded by officials of the modern system of governance, not the traditional form. “Most government officials complain that the traditional system hinders government projects,” he adds, “But in this case, while the traditional chief has taken action, the government administration has not done anything.”