With a nod from the Congress, an RJD leader rebels against Lalu Prasad. This is an event that reveals a somewhat unsettling aspect of the grand old party’s gameplan to win Bihar. 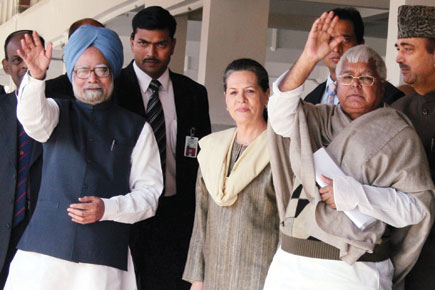 With a nod from the Congress, an RJD leader rebels against Lalu. This reveals an unsettling aspect of the grand old party’s gameplan to win Bihar.


With a nod from the Congress, an RJD leader rebels against Lalu. This reveals an unsettling aspect of the grand old party’s gameplan to win Bihar.

The dangers of befriending the Congress are perhaps most obvious to those who embrace it the hardest. Till more than a year ago, Lalu Prasad of the Rashtriya Janata Dal (RJD) was one of the Congress’ staunchest allies in Indian politics. When the Left withdrew support to the Congress-led United Progressive Alliance (UPA) Government in July 2008 over the Indo-US Nuclear Deal, he stood firmly behind the ruling party, outshouting all those who tried to throw it out of power at the Centre.

Even after the UPA returned to power last May, and shut out Lalu Prasad, his party remained loyal to the Congress. As late as the last Budget session of Parliament, when the Left and Bharatiya Janata Party (BJP) sought to slit the UPA’s jugular vein through cut motions on petroleum prices, the RJD withheld its votes by walking out of the House, thus ensuring the ruling alliance’s stability.

It’s in the nature of politics to weigh strength and weakness, not gratefulness. Now, with the Congress finding it difficult to get any foothold in poll-bound Bihar, where Lalu Prasad remains the only secular alternative to the National Democratic Alliance (NDA) regime, a senior Congress leader—considered close to Party President Sonia Gandhi—is trying hard to split the RJD.

According to sources, all it took was a long conversation between that senior Congressman and RJD leader Devendra Yadav for the latter to shoot off a letter to Lalu Prasad accusing the regional party of turning ‘politically insensitive’ and functioning ‘like a gang’. In his letter written on 20 July, Devendra Yadav has conveyed his decision to resign from the party’s central core group and national executive, in protest against the party being run through ‘diktats’ and not ‘on principles of internal democracy’. Says the letter, ‘If the party does not make its stand clear in three days on the issues raised by me, I will consider myself free to take any decision.’

Devendra Yadav has made up his mind. This is made obvious by the fact that he has stopped taking calls from the RJD chief. “Lalu Prasad is trying to contact him. For the last several days he has called him (Yadav), but could not talk to him,” Ramdev Bhandari, general secretary, RJD, tells Open, “We are doing our best to address his grievances and persuade him.”

The RJD may well be out of luck. Judge by the vocal support his misgivings get from Congress leaders these days. “The RJD is a single leader centric party where there is no internal democracy,” says a sympathetic Bihar Congress President Mehboob Ali Kaisar, “What Devendra Yadav is saying is 100 per cent true. Any leader with self-respect will feel suffocated in the RJD as well as in the JD-U (Janata Dal-United).”

The JD-U, though, an NDA member that runs the Bihar government, would be far less bothered by Kaisar’s concern for its partymen’s feelings. The Congress’ focus is on the RJD. And Devendra Yadav would be a prized catch. A former Union minister and the RJD’s deputy leader in the previous Lok Sabha, he has considerable influence in north Bihar. Though he lost his Jhanjharpur seat in the 2009 Lok Sabha election to the JD-U’s Mangani Lal Mandal, he still holds sway over the Mithilanchal region. This, say sources, is why the Congressman on the split-RJD mission wants Devendra Yadav either to join the Congress or float a new party with the objective of eating into Lalu Prasad’s formidable Yadav vote base.

Although the three-day ultimatum period is already over, Devendra Yadav is yet to spell out his planned course of action as Bihar’s Assembly polls approach. “Nothing is impossible in politics,” says Bhandari, “The Congress is committing acts of desperation because it is non-existent in Bihar. You will see lots of negative politics in the state this time.”

The Mithila region that includes the northern districts of the state has traditionally been a stronghold of the RJD. The region has nearly 60 Assembly constituencies, and in many of them, Yadavs and Muslims—from whom Lalu Prasad draws almost all his support—live in large enough numbers to determine electoral outcomes. If not in all Mithilanchal seats, Devendra Yadav is said to have pockets of influence in nearly two dozen of these constituencies—mainly in the districts of Madhubani, Darbhanga, Seohar and Sitamarhi. Any erosion of RJD support in the Mithila region may prove fatal for Lalu’s calculations.

Whether Devendra Yadav will join the Congress or set up his own party is unclear yet. Nor, at this juncture, is the success of the plot to split the RJD guaranteed. These events tend to turn on the finest of electoral and other calculations. Nevertheless, as observers of Bihar politics say, it is rather strange that the Congress should try to edge its way into the Assembly by pulverising the existing secular alternative to the NDA, which has the Bharatiya Janata Party (BJP) as its core even if the alliance’s Bihar government is led by a party (the JD-U) that resists saffron influence. Assuming that the Congress intends grabbing the space that might be vacated by weakening the RJD, there is still the risk of saffron forces emerging a whole lot stronger at the end of the fracas.

“The strategy of the Congress to use all its might for grabbing the secular space first and fighting the BJP only thereafter, is dangerous,” in the opinion of Kunwar Danish Ali, Janata Dal-Secular (JD-S) secretary general and spokesperson, “It only harms secularism. To strengthen the country’s secular polity, there need to be two secular alternatives—one in the form of the Congress and another in the form of the Left and other regional secular parties. Only then can communal forces be marginalised.”

The JD-S has arguably been the first victim of this Congress strategy, one that has indeed succeeded in weakening the party of former Prime Minister HD Deve Gowda and re-entrenching the Congress as the main secular alternative in Karnataka. But it has also contributed to the BJP’s capture of power in that state.

It all began after the 2004 Assembly polls in Karnataka. Of the total Assembly strength of 224, the Congress won 65 seats, the JD-S 59, and the BJP romped home to Bangalore as the single largest party with 79 seats. “Soon after forming a government with the support of the JD-S, the Congress started engineering a split in our party,” recounts Danish Ali, “By 2005-end, it was clear that the JD-S’s Deputy CM S Siddaramaiah, working at the Congress’ behest, was planning to walk away with around 30 party MLAs. (JD-S leader) HD Kumaraswamy came to know about the Congress plan, and without wasting time he quickly negotiated with the BJP and formed his own government. With the JD-S heading the government, the MLAs whom Siddaramaiah had persuaded to split the party now developed cold feet. This is how the Congress’ plan was sabotaged.”

“Once again in 2007,” he adds, “when there was political instability in the state following the JD-S’s decision—based to a great extent on Congress feelers—not to transfer power to the BJP, the Congress started playing its dirty games. Not only did the party back out from its promises, it once again started poaching our MLAs. Had the Congress worked with our party then, the BJP would have been finished in the state.”

The Congress strategy did yield results. Or so it seemed for a while. Weeks before the 2008 Assembly polls in the state, JD-S leader MP Prakash along with two dozen party MLAs joined the Congress. “The weakening of the JD-S did not strengthen the Congress either,” says Danish Ali, “It was the BJP which got the real benefit.” In the Assembly election, the Congress made only marginal gains, taking its tally to 80 from 65, while the JD-S’s strength slid to 28 from 59. The BJP won 110 seats, only three short of an absolute majority, and formed its first ever government in South India.

In Bihar now, the Congress’ manoeuvres are not only about splitting the RJD. The same Congress leader who instigated Devendra Yadav’s revolt against Lalu Prasad is also known to have been leading the party’s efforts to foil the alliance between the RJD and Lok Janshakti Party (LJP) of Ramvilas Paswan.
The RJD and LJP had sworn to face the upcoming polls in Bihar together. The alliance, however, is on the rocks right now. The contentious issue? Seat sharing. Sources say that while the RJD wants to leave 60 seats for the LJP in a 243-strong Assembly, Paswan has been insisting on fielding candidates for 90 odd seats. Smelling an opportunity in the resultant deadlock, this Congress leader has held one round of talks with Paswan, trying to impress upon him the benefits of aligning with the Congress instead.

Together, the LJP, which commands a significant loyalty among Scheduled Caste voters, and the RJD, which is down but not yet out in the eyes of Yadavs and Muslims, may indeed re-emerge as a force to reckon with. But the chances of either doing well without the other are bleak. Neither is the Congress in a position to offer an electorally credible secular alternative in such a scenario. In other words, all the secular infighting is likely to directly benefit the NDA.
Going by the Karnataka experience, such an eventuality may well be part of the Congress’ Bihar strategy, ‘dangerous’ or not. “You know,” says a Congress Working Committee member who is up-to-date on developments in the state, “ultimately if it leads to a Congress revival as the sole secular alternative in the Hindi belt, that’s good for the country.”

Politics, however, does not always pan out as planned. “Do not forget what happened in Gujarat,” says Danish Ali. “The Janata Dal under the leadership of Chimanbhai Patel did provide an alternative secular choice to voters in Gujarat, apart from the Congress in the 1980s and early 1990s. But after the Congress made Patel and his Janata Dal (G) merge with itself in 1992, the Congress remained the only secular choice in the state. And when people decided to vote against it, they had no option but to go for the BJP. Once that happened in 1995, and the BJP got to communalise the body politic, it has continued to rule the state. ‘The sole secular alternative’ looks so pathetic in Gujarat now.”