Obituary of an Unknown Indian

On the 26th of November, among those who were massacred by the terrorists was one Sunil Thackeray. All that was known about him then was that he sold omelettes. This is his story. Told by his love, Salma 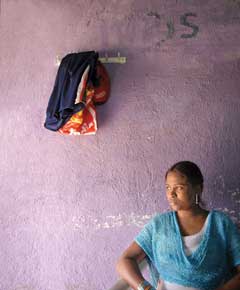 Mumbai 26/11. Among those killed by the terrorists was one Sunil Thackeray, who sold omelettes. His story. Told by his love, Salma


On the night of 26th November, I was at home watching TV when a call came to our neighbour, a man we call Uncle, informing me Sunil was shot. Do anything, anyhow, but get here, said Asha, a friend who had seen his body being taken away by the police. We saw what was happening on TV and rushed. Trains had stopped. So I took a taxi. It cost me Rs 500.

Sunil was my man and we lived together in a one-room kholi in Dombivali. He was papa to my children. He was an omelette-pavwallah at VT station (Victoria Terminus, now Chhatrapati Shivaji Terminus). I saw him at St George hospital. There were two bullet wounds. One in the neck and the other in his head. Which side, I don’t recollect. If you have seen the corpse of someone who was all you had, you wouldn’t ask such questions. Before death sinks in, what hits you is the absence. The person you needed the most that moment, the only man you could trust, is no more. Sunil was my man and I his woman. The government may not consider our relationship, a union of people without ration cards, birth certificates or a registered
marriage, legitimate for compensation. His friends can call me names, but fact is fact. I loved him. And he loved me and my children. He will live on through my memories.

Locals, newspapers, passers-by want to speak to me about Sunil. They want to know more about him because he was shot dead by a terrorist. But how can you understand a man’s life, a man’s worth, after he’s dead? Still, I will tell you everything. Just don’t go asking others at VT station. They don’t have the right to speak about him. Friends he considered special betrayed him after his death by exploiting me for the little he left behind. Give a dead man the dignity he deserves. Don’t let others tell you who he was.

Both of us ran away as little children from home, but met as adults. I ran away from Kolkata as a 10-year-old because of my stepmother. And he, well, I don’t know when and why he ran away. All I know is that he has a big house in Nashik, with apple and guava farms. I never asked about his past. I grew up outside VT station, with friends who I consider my sisters. As children, we would beg, visit the Babadin Baba ka Dargah and Madina hotel for free food. We’d sleep in a group. That is how we survived.

I have lived most of my life like this, but I don’t come across as a person from the streets. I look after myself. I only wear salwar kameez sets, and don’t mix and match. I comb my hair into a bun. I line my eyes with thick kajal, to draw attention to my Kolkata eyes. I carry myself with grace. And I stand out when I sit here, on the pavement, surrounded by loud voices, children’s howls, drunks and men who just stand around, violating you with their stares. If you speak to me politely, I try to do the same. And I speak only when spoken to.

After Sunil’s death, nothing is the same. I had to sell our TV, everything, and move out of our kholi back into the streets, amid old faces. I don’t work. I don’t earn. I live on goodwill, which doesn’t exist any more. The police gave me Rs 15,000 when they handed over the body. Some of Sunil’s friends forced me to give them money, lying that he owed them big amounts. Even Sunil’s omelette-pav utensils are held in a shop that refuses to part with it. Like all street people, I had kept Rs 6,000 at a paan shop, as I can’t sleep with it under my pillow. The boy who worked at the shop ran away with it. I don’t trust anyone. I can’t. When the money goes, even friendship goes.

Sunil was a simple man. If he had dal and roti, he wouldn’t complain. He loved the fried fish I made for him at home, Kolkata style. In the morning, kala paani was all he had. Two to three cups of black tea were all he needed to keep him going.

Ever since he could, he worked alone. Like all of us, he also spent his early years begging and doing odd jobs at tea stalls. Gradually, he set up his own dhanda outside VT. First, he sold toys, later he started making and selling omelette-pav forRs 10 and bhurjee-pav for Rs 20. No one helped him. During municipality raids, he would carry all his belongings himself and run. On the night of the 26th, I don’t think he knew where the bullets were coming from, who was shooting them and why. But Sunil didn’t abandon his dhanda. When he got shot, he was running from his usual spot, with his entire dhanda on his head.

Sunil would spend the week at VT and returned home for the weekend. I wasn’t allowed to visit him at work, as he couldn’t handle strangers passing comments at his woman. All my friends, the girls I left behind on the streets, loved teasing him: “Why do you only smile in her company?”

He was saving money to buy a rickshaw, so he could work in Dombivali and live at home. He was saving up to take me to his home in Nashik. But he never told me where he saved his money, how much he owed and how much he had.

Asha, a childhood friend, would always say how lucky I was. Only those with big destinies can leave the streets for a home. Otherwise, who looks at a street girl? Each day, each night, everyone is out to harass the women on the street.

Sunil was a quiet man. He never picked fights or raised his hand. He was full of silence. If you saw him, you wouldn’t believe he had the courage to go up to a woman. But it was he who came up and spoke to me the first time. He wasn’t deterred by my two children from a previous relationship. Slowly and silently, we began to love each other. We rented a one-room kholi and moved in. I put my kids in a Christian hostel.

I am Muslim. Sunil was Hindu. I gave him a Hindu cremation at Chandanwadi near Marine Lines. There were no pandits. There was no puja. Sunil’s friend’s son lit the pyre. He must be four or five years old. I don’t even know his name. I chose him because he reminded me of my son. I haven’t told my children papa is dead. They’re so young, my girl is eight years old and son five. How will they focus on studies? Sunil wasn’t their father. But he loved them like his own.

In the streets, a woman can’t survive without a man. I became a mother as soon as I could, at 16 or 17 years, I guess. I lived with a different man back then, on the streets of Churchgate. But after the birth of my second child, I left him. My left hand is etched with blade scars. A violent past stalked me from Churchgate to VT.

The man you ask about, Sunil Ashok Thackeray, you’re interested in him because he was killed by terrorists at VT on 26th November. Now that he is dead, you want to put a figure on how much we lost. On 26th November, I wasn’t the only one who lost someone. As I sit here on the street right outside VT, I look at the endless commuting crowds and wonder: do the people who take taxis, trains and buses take their loved ones for granted?

I realised Sunil’s worth the first time I saw him. I was sitting on the same spot I sit on now. He was walking from the place of his dhanda to the crowded crossroads in front of VT station. I was sitting on a tattered mat, holding my boy Aman, then the size of my forearm, with three-year-old Soni playing nearby. From that moment on, he silently stood by me.