Not Your Textbook Saint 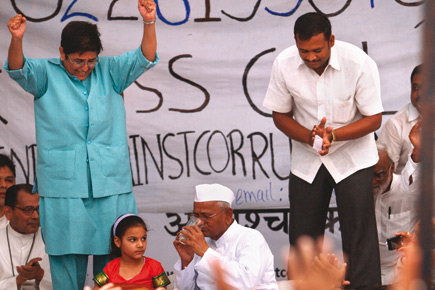 
In 1965, during the Indo-Pak war, Anna Hazare was the driver of an Indian Army truck. His trundler was part of a military convoy attacked by Pakistani jets at Khem Karan along the border in Punjab. Very few survived that attack. Even the man in the next seat was killed in a hail of bullets. He was 25 at the time.

The sequence of events has been documented before. According to the classic account, Anna Hazare’s thoughts turned immediately to the divine as his convoy was riddled by enemy fire from the air. Once the smoke cleared, he saw bodies all around him. Struck by his escape—as the legend goes—he directed his voice upwards. “You saved me, God,” he kept saying, “But why?”

God did have a design for him, and it became apparent much before he went on his hunger strike at Jantar Mantar. Hazare quit the Army and returned to Ralegan Siddhi, a poor village in Maharashtra’s Ahmednagar district. He mobilised the youth to develop the village, ran into corruption, and was almost forced to become an anti-corruption activist. For over two decades, he has relentlessly, if amateurishly, got governments to implement reforms on corruption. Not even his enemies dispute that the Right to Information Act in Maharashtra was passed solely on account of his efforts.

Like the people who surround him, there is neither consistency nor permanence to Hazare’s struggle. Those who are part of one movement don’t seem to figure in the next. Whether it is activists Pushpa Bhave, Baba Adhav, late Govindbhai Shroff, late Mohan Dharia, former bureaucrat Avinash Dhamadhikari and a host of other well known figures none have stayed a part of his campaigns. Those who have followed Hazare’s work through the decades put it down to the maverick manner of his functioning. “Anna does not trust anyone, so he does not delegate duties or discuss his plans with anyone. He functions like a one-man army,” says a former bureaucrat who joined the Jantar Mantar campaign. Hazare’s take is different—he feels that people must not hold on to posts if they do not attend meetings.

Even in the current agitation, some co-protestors are already distancing themselves. Mallika Sarabhai, who appeared on TV channels spouting praise for Hazare, is now going her separate way because of Hazare’s praise for Gujarat Chief Minister Narendra Modi. In a letter to Hazare, she wrote, ‘We are deeply shocked by your endorsement of Narendra Modi’s rural development. There has been little or no development in the state. In fact, gauchar lands and irrigated farmlands have been taken away by the government and sold off at ridiculous prices to a small club of industrialists.’ Sarabhai went on to add, ‘Your endorsement is appalling and we will be forced to distance ourselves from the Lokpal Bill movement unless it is irrevocably retracted.’

One of the obvious comparisons doing the rounds now is between Anna Hazare and Mahatma Gandhi. But there is a difference. Gandhi was sincerely committed to all forms of non-violence. Hazare has not been averse to using violence for what he considers valid reason. When he first set out to reform Ralegan Siddhi, he ordered that villagers be prohibited from drinking or coming drunk into the village. According to a Reader’s Digest article: ‘He soon proved he meant business. A few days later, when three men returned to Ralegaon drunk after a binge in a nearby village, Hazare had them tied to the temple pillars and personally flogged them with his army belt,’ no less.

Hazare justified it, saying, “Rural India is a harsh society. If you want change, it’s sometimes necessary to be tough.” The villagers didn’t seem to mind, and the reformed alcoholics were all praise for him several years later.

But Ralegan Siddhi is also not the same village anymore. Ravindra Jagannath Jadhav, a former office assistant to Hazare, saw little glory in working for the man. When he first took the job, Jadhav was starry-eyed. After all, Hazare was a celebrity. It just took him a couple of days on the job to realise that it was not his calling. “There are no job opportunities or any future in Ralegan Siddhi. Anna used to pay me a salary of Rs 1,200. Could I marry and set up home on such a paltry sum? There is no future here,” says Jadhav, whose parents chide him for saying anything against the social activist.

He is not the only one who wants to move on. Despite the resounding success of Hazare’s latest stir, Ralegan Siddhi is full of young men who want to live their dreams elsewhere. Nearly three decades after he transformed the drought-scarred village into a green paradise and model for development, cracks have appeared in the copybook Eden.

“Anna is insistent that we live in the village and look after it. What opportunities do we have here? Our parents have never seen a good life. There is only poverty here. But they agree with Anna and want us to live here. What about our dreams?” asks a friend of Jadhav.

When Prashant Shinde, a former office manager for Hazare’s projects, signed up in 2003, he was not heeding any lofty call. He was hoping that one of Hazare’s many important visitors would give him a break. He is still waiting.

Alcohol, smoking, gutka, paan and paan masala are all forbidden in Ralegan Siddhi. At some level, that may be understandable. But a large part of the discontent stems from Hazare’s ban on cable TV. “Cable TV is not just about dance and songs. It opens our window to the world. There are so many educational programmes that help us gain a better perspective,” says another youngster unhappy with the man’s finger-wagging ways. Hazare has justified the ban by saying that it will keep villagers from working and they will think only of entertainment.

There is a rundown TV set kept in the common community room at the Yadav Baba Temple. However, TV hours are strictly regulated, and it is never more than half-an-hour at a time. Only Doordarshan and select Marathi news channels are switched on. There was a relaxation, though, while Hazare was on his indefinite hunger strike at Jantar Mantar recently.

Non-vegetarian food is also not permitted. In past interactions, Hazare has pointed out that it leads to a craving for alcohol, a connection that has no basis whatsoever. There is also a ban on cows, buffaloes and goats grazing on open land. They have to be fed wherever they are tied. As a result of this, livestock cannot move around freely. Hazare feels that grazing denudes the top cover and leads to soil erosion. There is also a ban on axes—as people will succumb to temptation and chop trees. And if all this is not enough, men in the village must undergo vasectomy to limit their family size.

Though Hazare has fought corruption for over two decades, the Jantar Mantar strike has catapulted him into national consciousness. During his past hunger strikes at Mumbai’s Azad Maidan and in Ralegan Siddhi, except for a handful of reporters from the vernacular media, the media would ignore him. A decade-and-a-half ago, when he was on a fast-unto-death against corruption at Ralegan Siddhi, a group of reporters from the vernacular media took over his campaign and became his publicity wing. Each hour, they gave updates to representatives of other media outfits over the phone. Facts were twisted irreverently. If 50 people attended an event, they hiked the number to 500. After a week into the fast, these reporters told Hazare that since it was inconvenient to cover it for so long, he must think of giving it up. Hazare asked all those present if they thought so too. When all of them nodded, Hazare took the cue. He decided that he would give up the fast on a Sunday. When he was told that it would be an inconvenient day for the press, he decided to give it up the next day at a mutually convenient time.

Television has been a key factor in the sudden renown he has acquired. “In the past, there was no TV. The frenzy was due to TV channels beaming the fast all day long,” admits a Hazare supporter. Prior to his fasting at Jantar Mantar, Hazare had toured Maharashtra to garner support for the Jan Lokpal Bill. The attendance at these rallies was nothing to shout about, nor did the media cover it.

Many of those who have known him feel that the work he undertakes needs organisational backup. Lack of infrastructure, a network and a dedicated workforce renders Hazare powerless to keep a check on all the issues dear to his conscience. His Hind Swaraj Trust is skeletal, really.

Of the many enemies he has across the political spectrum, one is former NCP minister Sureshdada Jain. Forced to quit office after Hazare levelled charges of corruption against him, he had hired a detective agency to look into the goings-on of the Hind Swaraj Trust. A few financial discrepancies were found that Hazare dismissed as “minor irregularities”.

In the early 1990s, the Shiv Sena gained from corruption charges levelled by Hazare against the Sharad Pawar-led Congress government. But when the Sena-BJP settled into Mantralaya in 1995, Hazare alleged that three of its ministers were corrupt. The Sena hit back, alleging that Hazare had misappropriated Rs 22 crore given by the state to his Hind Swaraj Trust. In response, Hazare called Bal Thackeray a liar and cheat. The Sena chief called him a “crackpot”. Finally, Thackeray’s nephew Raj was sent to meet Hazare and calm tempers. Still, one of the three ministers filed a defamation case against Hazare, who was sentenced to a three-month term. He served only one day of it, after which the then Chief Minister Manohar Joshi intervened to have him released.

Also known is that Anna Hazare once contemplated suicide and even wrote a two-page essay on why he wanted to end his life. He wanted an answer to the purpose of human existence. One day at the New Delhi railway station, he chanced upon a book on Swami Vivekananda. Drawn to the book by the sanyasi’s picture, he bought and read it. It gave him his answer—that life’s purpose lay in the service of fellow human beings. He gave up alcohol, non-vegetarian food and decided to stay unmarried and celibate. This was in 1964. Many will disagree with the way he goes about it, but 45 years later, he still sticks to that purpose.

(This article has been modified after the editor received a letter)