No Precedent for Kejriwal’s Lokpal

If it doesn’t work in theory, how is it ever going to work in practice? So asks Prashant Reddy 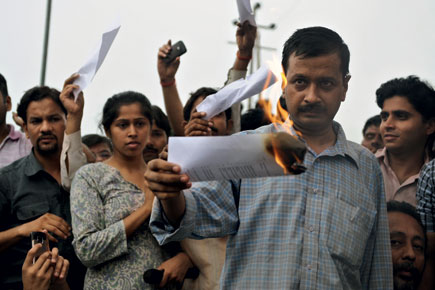 If it doesn’t work in theory, how is it ever going to work in practice?


The ostensible reason for Kejriwal’s reckless hurry to have the Jan Lokpal enacted into law is that the institution’s proposal has been pending for the last 42 years. The rhetorical value of ‘42 years’ should not be underestimated. This argument has been used skilfully by Kejriwal to demonise parliamentary democracy and feed the anger of mobs at Delhi’s Jantar Mantar and Ramlila Maidan. But is this an honest statement? Was Kejriwal’s version of the Jan Lokpal actually languishing for 42 years?

To answer that question, we have to go back to 1968, when the late Dr LM Singhvi moved the first Lokpal Bill in Parliament. The 1968 version of the Bill was inspired in large part by the Swedish concept of an ‘ombudsman’ and was specifically designed to be a toothless institution which would only investigate specific complaints on the broader issue of maladministration, and submit reports to the President who would then lay it before parliament. The 1968 version was almost identical to the Swedish and British institutions of parliamentary ombudsmen. The Swedish ombudsman, who is elected by the Swedish Parliament, can at most initiate disciplinary proceedings against a government employee, while the British version can at most table a report directly before parliament. Historically, therefore, the ombudsman was always envisaged as a watchdog that would bark but not bite. From 1968 till 2001, India saw as many as eight different versions of the Lokpal Bill being proposed.

The focus of later versions of the bill began to shift from a grievance redressal mechanism to the setting up of an anti-corruption body, but the powers and functions envisioned remained largely the same as in the initial 1968 version. All these versions of the Lokpal had three fundamental differences with the Jan Lokpal proposed by Kejriwal: First—all these earlier versions of the Lokpal did not have any police powers; that is to say they could not deprive citizens of their life or property by arresting them or seizing their property. Second—these earlier versions of the Lokpal did not have prosecution powers. Third—the 1968 version of the Lokpal had jurisdiction only over ministers, secretary-level bureaucrats and employees of government-owned companies and societies. The primary aim of the 1968 version was not merely to fight corruption but increase transparency in the higher, not lower strata, of the administration.

Fast-forward to 2011, when Kejriwal suddenly came up with the idea of a Jan Lokpal who would not only have powers to investigate but also arrest, prosecute and attach property of Central Government employees, bureaucrats, judges, parliamentarians and ministers. Kejriwal’s idea was to create an attack-dog and place it outside the political system. The other extra features of his version included the power to tap telephones, monitor computer networks, etcetera. It is quite obvious that there is no resemblance between Dr Singhvi’s vision of the Lokpal in 1968 and Kejriwal’s version in 2011. Yet, Kejriwal has managed to convince vast numbers that he’s merely pushing for an idea that has existed for 42 years.

Going by discussions in the English media, it appears that Kejriwal’s version of the Lokpal institution has found deep resonance within the middle class. One of the main reasons for this widespread support is the analogies drawn with two institutions that have widespread credibility among middle-class citizens—the Election Commission (EC) and Comptroller and Auditor General (CAG). The middle-class has been told that the only reason that both these institutions have managed to stand-up to ‘evil politicians’ is that they have complete independence from the political executive. Thus the simple conclusion: ‘no political interference’ equals a ‘superbly efficient bureaucracy’; hence, let us make sure the Lokpal is independent of the political executive, and we will get similar results with corruption. The fact of the matter, however, is that both the EC and CAG are mere watchdogs with no police powers, or for that matter any power of considerable note. They cannot arrest public people, seize their property or tap their phones. At most, the EC can exercise minor police powers during elections, and the CAG can only audit and submit reports to the President; the natural corollary of no real power is no real possibility of corruption. Any comparison of the Jan Lokpal with the EC or CAG is completely flawed because while the latter are mere watchdogs, the former is a vicious attack-dog.

In the history of Westminster-style parliamentary democracy, there is simply no precedent of an institution with such strong police powers having been kept out of the purview of the political executive. Let us not forget that the power to arrest and deprive a person of his fundamental rights is the most fearsome power a State exercises, and it is exactly for this reason that institutions like the CBI are made accountable to not only the judiciary but also the political executive, which in itself is accountable to the people of the country. Viewed in this larger context, the few odd instances of political interference in an anti-corruption investigation is a small price to pay in order to ensure the greater political accountability of powerful institutions. This is precisely the reason that the ombudsman-style institutions in the UK and Sweden have been given complete independence, with no police powers. Kejriwal’s model, on the other hand, removes Parliament and the political executive completely from the equation, be it appointment, removal or functioning of the Jan Lokpal.

The above issues are not the only problem with Kejriwal’s vision of the Jan Lokpal. There are more fundamental flaws, such as the fusion of the investigation and prosecutorial wings under the auspices of the Jan Lokpal. This flaw has been replicated in the Government’s version of the Bill. The Supreme Court of India and Law Commission of India, in three different reports—the most recent version being the 197th Report released in 2006—have advised the Central Government to ensure not a fusion but instead independence of the prosecution from the investigation, because unlike the investigator who is tasked with securing convictions, the role of the public prosecutor is to assist the court in ensuring justice and not merely convictions.

Given the obvious conflict between these roles, the public prosecutor has to be independent, in order to safeguard our criminal justice system from vindictive investigators. In fact, when the Indian Parliament enacted the Code of Criminal Procedure, 1973, it ensured that public prosecutors, unlike the State’s other legal officers, would be appointed only in consultation with the judiciary. This was to ensure that public prosecutors did not come under the influence of the political executive, which had investigative agencies under its control anyway. Unfortunately, most states have amended this provision to completely politicise the office of the public prosecutor. The last report of the Law Commission on this subject, that is, the 197th Report, had agreed with a PMO (prime minister’s office) proposal to depoliticise the office of the public prosecutor. If political parties accept this fundamental proposition of the law, it would completely alter the nature of Kejriwal’s vision of the Jan Lokpal because now it would only have the power to investigate and not prosecute.

In conclusion, although Kejriwal may be guided by the best of intentions, it is becoming increasingly clear that his ideas have little basis in political or legal theory. If it doesn’t work in theory, how is it going to work in practice?

The author is an advocate and co-founder of the Pre-Legislative Briefing Service (PLBS), a think-tank