No Country for Statues 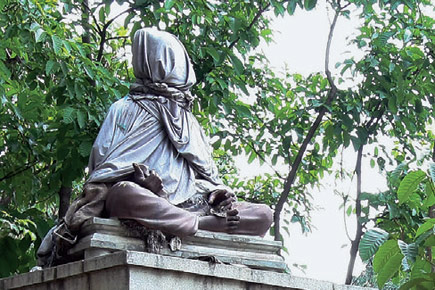 
India is a great country for statue politics. Uttar Pradesh Chief Minister Mayawati recently got the Supreme Court go-ahead to put Dalit icons—including herself in full bronze splendour—on the pedestal across the state. But in Bangalore, the BJP government’s decision to inaugurate a statue of Tamil poet Thiruvalluvar on 9 August has only succeeded in stirring up a lingering dispute between Karnataka and Tamil Nadu. The statue in question, incidentally, has been wrapped in gunny sacks and waiting to be unveiled for the last 18 years.

Funnily enough—or maybe not so funny for some—Karnataka CM BS Yeddyurappa has reached an understanding with his Tamil Nadu counterpart, M Karunanidhi, that the latter will reciprocate this gesture by unveiling a statue of Kannada social reformer Sarvagna in Chennai on 13 August. Pro-Kannada activists, known for raking up anti-Tamil feelings, are upset with Yeddyurappa’s decision, seeing this as an indication that the state government is cosying up to Tamils in the city, eyeing their votes for the coming civic polls. They’ve declared they will not allow Thiruvalluvar’s statue to be put up.

In the meantime, the statue enjoys intermittent police protection whenever things get heated up between the two states, thanks largely to the Cauvery river water dispute that plays up every few years. Post 1990, when Bangalore saw its worst anti-Tamil riot, the statue issue has come in handy to whip up anti-Tamil feelings.

For nearly two decades, the Bangalore Tamil Sangam, whose dream project this is, has been petitioning every president, prime minister, chief justice, governor and chief ministers of both states to get the statue installed. “This is a purely cultural issue. Thiruvalluvar was a great saint-poet of 31 BC, and his teachings are relevant even today. He did not badmouth any religion, class, creed, language or people. We are not for making it a political issue at all,’’ says Meenakshi Sundaram, Sangam president.

Founded in the 1950s, the Sangam first wanted to install Thiruvalluvar’s statue on the Ulsoor lake front, facing its building, in 1980. But the Bangalore City Corporation (BCC) denied it permission, fearing this would lead to similar demands from other organisations, and the lake front would get cluttered with statues. “So, finally in 1991, the corporation permitted us to install the statue at a nearby public square. Barely a few days before the inauguration, a Kannada organisation went to court and sought a stay. The BCC panicked and withdrew permission, fearing the ire of Kannada activists. The fibre-glass statue has since been wrapped in gunny sacks pending a formal inauguration,’’ explains Sundaram. The original bronze sculpture, weighing 500 kg, is resting in safety on wooden tables inside the Sangam premises. “This will be shifted to the pedestal a day before the ceremony,” an office bearer says.

Recently, the Sangam convinced Yeddyurappa that they did not have any hidden agenda in installing the statue. He then met Karunanidhi, who issued a notification to unveil Sarvagna’s statue in Chennai near the Kannada Balaga (Kannada Friends’ Association) office. This statue, too, has been the subject of much misunderstanding. In 1998, the then mayor and current deputy CM, MK Stalin, had given the Balaga permission to install Sarvagna’s statue in Chennai. Its delay became a political weapon in the hands of rabble-rousers. “Tamil Nadu has not allowed Kannadigas in Chennai to put up the statue for a decade now. We will protest if the government unveils the Thiruvalluvar statue,” says Vatal Nagaraj, a former MLA and pro-Kannada activist.

“This is not an electoral, racial or ethnic issue, but a purely cultural one,’’ stresses Sundaram. She hopes the statue issue will be put to rest soon, and hopefully help Kannadigas and Tamils sheath their swords.