No Country for Dead Men 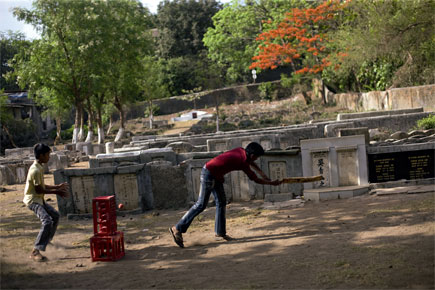 
Mumbai’s Antop Hill is a small hill that erupts between the city’s Wadala and Guru Tegh Bahadur Nagar railway stations. It was once a gritty industrial zone with a number of factories, before housing complexes came up. It also has a number of resting places for the dead. There are a couple of Chinese cemeteries, with broken tombstones overrun with plants presenting a picture of neglect; there is one for Sunni Muslims; and a cremation area for Hindus. But the most beautiful among them are the graveyards of two minority communities, one minuscule and the other almost nonexistent. These belong to Baha’is and Armenians.

Established in 1905, the Baha’i Gulistan is no less a garden than its name suggests. A paved pathway runs through the cemetery; trees and flowers shade the marbled graves. Just a ten-minute walk away, located on a road that goes up the hill, is the Armenian cemetery. The graves here are marked with crosses that bear beautiful carvings. Some have inscriptions in Armenian; others, in English. Since very few Armenians now live in Mumbai, Baha’is have been entrusted with this cemetery’s care, with the special incentive that they can use it to bury their dead as well. This was in 1983. Not only does this cemetery now have several Baha’i graves, it also resembles a garden.

For all the beauty and serenity of these two graveyards, they conceal an unsettling force of circumstance. Like other communities that bury their dead, the Baha’is of Mumbai are fast running out of burial space. Their community might be a small one—around 500 in the city—but they are aware that the two graveyards are no longer enough. In 2004, after they were unable to secure more burial land from the Brihanmumbai Municipal Corporation, the Local Spiritual Assembly (LSA), the elected council of Baha’is in Mumbai, passed a decree whereby two bodies are to be buried in a single grave. So now, bodies are buried in concrete and stone vaults with partitions. In 2008, they realised that even this was not enough. So a new decree was passed—each new grave will have to house three bodies. So far, this hasn’t been implemented, since no deaths in the community have occurred in this period.

“We had to come up with an alternative,” says Nargis Gaur, the 52-year-old secretary of the LSA, “Else, we would have run out of space a long time ago.” Gaur runs a firm called Eagle Courier that runs backend operations for banks. Her father and grandfather are buried in the Baha’i Gulistan; her mother’s grave is one of the few in the Armenian cemetery that hasn’t had to share space. As a child, she didn’t give much thought to funerals, and would only think of Baha’i cemeteries as pretty resting places. It was only later, as a 27-year-old, when she became a member of the LSA, that she realised how dire the shortage of space was. “We Baha’is celebrate death,” she says, “We see life as a ‘womb’, which we leave to go to God. So despite being forced to bury more than one body in a grave, we try to maintain this outlook.”

In time, Gaur says, the three-body decree may need to be revised for each grave to include even more bodies. Three-to-a-vault, only 120 more bodies can be accommodated at the Armenian cemetery, on current estimates, and at the Baha’i Gulistan, only 40.

It is not just Baha’is who are amending centuries-old traditions to deal with the space crunch in graveyards. As the dead in Indian metros face a real estate crisis, members of many different faiths are coming up with peculiar methods to tackle it. Even Kolkata, long held to be free of this problem—thanks to numerous graveyards built by the British when the city was India’s capital—is facing a squeeze. On 11 May, the Christian Burial Board (CBB), the statutory governmental body that runs five of the largest cemeteries for Christian denominations in Kolkata, issued notifications on its website and in newspapers claiming that those graves in the Lower Circular Road Cemetery that are in ruins will be re-allotted to families that are in need of space for their dead. This cemetery was established in 1840, and many of its 12,000 graves are in poor condition. The graves of those whose family members voice disapproval will not be touched. The others will be re-allotted after 31 July.

Ranajay Bose, executive member of the Christian Burial Board, says, “For long it was believed that Kolkata will not face a crunch. But it is happening. There is space for very few graves left, and in those that are available, we have asked families to bury more than one member there.”

While the reuse of old graves will offer some relief, Bose claims more urgent steps are needed. An old unused gas crematorium exists in the city’s Mini Cemetery, and the board wants to use it for Christians who are willing to opt for cremation. “This crematorium was established to burn the bodies of those who died of plague in the late 19th century,” says Bose, “Currently, the municipal body is averse to the idea because it is located in a central part of the city. But soon, there will be no other alternative.”

Not many Christians in India are keen to opt for cremation. One of the few to have embraced this idea is Father Joe D’Souza, the 60-year-old Parish Priest of St Ignatious Church in Mumbai. This is the best way to address the space crunch, he believes. The priest not only advocates it in his sermons, he has also informed his friends and family that he should be cremated once he dies.

“When I was an Assistant Priest at St Michael’s Church [in Mahim],” says Father D’Souza, “I once discovered large holes in some graves there. They were made by rats that were biting flesh off the dead.” The soil of this part of Mumbai had been reclaimed from the sea, he found, and was believed to have high salt content, as a result of which bodies would take excessively long to decompose. “This incident made me realise that I did not want to leave my body in such a way,” he says, “Over the years, I was to understand that it was not just rats that I had to fear, but also a shortage of space.”

THE MOST COMMON device being employed across faiths, however, is the reuse of graves. Some cemeteries reopen graves after 10 years, and in crammed cities like Mumbai, sooner still. In fact, there are no permanent graves available in Mumbai. Both in Protestant and Roman Catholic cemeteries, bodies are buried for two years, after which their graves are reused. The bones of previous occupants are exhumed, and either stored in ‘niches’ (small shelf-like vaults in cemetery walls), or, if the family is unable to afford a niche, cast away in a bone well, a tank-like structure that stands within all cemeteries. Niches are in short supply as well. The cemetery at St Michael’s Church, where Father D’Souza once worked, for example, has already run out of space for niches.

On a few occasions, graves dug up after two years have been found to have bodies that were not yet decomposed. A solution has been found in coffins made of easily-degradable wood. “To avoid situations where bodies remain in non-decomposed states, parishes have asked people not to use teak coffins,” says Danny Pinto, funeral director of Danny Michael Pinto Undertaker, a popular undertaking company in Mumbai, “We make our coffins with silver oak wood on the sides and plywood at the bottom. These help in quick decomposition.”

No permanent graves are available in Delhi either, though the capital’s Christian cemeteries introduced the concept of niches only a few years ago. Community members were averse to the idea at first, but are now coming around. “We tried to encourage cremations,” says Father Januario Rebello, the 63-year-old chairman of the Delhi Cemetery Committee, which runs five cemeteries in the city, “But very few have opted for it. Now, after seeing the success of this concept in cities like Mumbai, we are trying to popularise the idea of niches.”

Christian graves in Delhi are reused every five years. The situation is only a little better in smaller cities. For instance, in Mangalore’s cemeteries, like the one run by the 331-year-old Milagres Church, graves are reused every 10 years. Niches are also used here.

Muslims in Mumbai, with their larger numbers, reuse graves after a period of just a year. Bada Kabristan, the largest Muslim cemetery in Mumbai which has 7,000 graves across seven acres of land, also goes by this time frame. According to Ameen Antulay, chairman of the Jama Masjid Trust that runs the cemetery, there are no permanent graves available here, and the trust has recently enforced a new rule that stipulates that all graves measure three by seven feet.

In Delhi, many Muslim cemeteries are reportedly being reused every six months. According to Imam Umer Ahmed Ilyasi, chief imam of the All India Organisation of Imams of Mosques, “Most Muslim graveyards try to keep an intervening period of a year before a grave is reopened, but many of them now reuse it within six months.” Delhi has around 18 cemeteries for Muslims.

While Indian communities that bury their dead claim that their pleas for more burial space have gone largely unnoticed, there is at least one case of the problem getting a prompt response. Two years ago, a popular English newspaper in Mumbai learnt that the Muslim cemetery of Juhu—which houses the remains of well-known Bollywood celebrities like Madhubala, Parveen Babi, Sahir Ludhianvi, Talat Mehmood, Khwaja Ahmed Abbas, Ifteqar, Naushad Ali and Mohammed Rafi—was reusing graves every two years. The newspaper splashed this ‘news’ on its front page.

This cemetery is a relatively small one, with no more than 400 graves. Not only are graves here reused regularly, every few years, fresh soil is rolled out and levelled by trucks. “I didn’t understand why people were so aghast at the news item,” says Asgar Ali, a trustee of the Muslim Majlis that runs the cemetery, “Didn’t they know we don’t have space?”

The newspaper, however, erroneously reported that ‘all graves’ here had been reused. The truth is that two of them remain untouched: those of Naushad Ali and Mohammed Rafi. The trustee is a fan of both musicians, and according to him, he knew that other fans like him would be upset if their remains were moved. The marble plaque that marked Rafi’s grave, however, was removed many years ago.

Binu Nair, a former marketing professional based in Dubai who quit his job to start a fan club of Rafi in 2006, says, “When I first came to the graveyard to pay my respects, I saw many others like me. That’s when I decided to start this club.” Now, Nair, founder of the Rafi Foundation that organises concerts of Rafi songs, visits the grave every month—and without fail on 24 December and 31 July, the singer’s birth and death anniversaries. On those two days, Nair and other fans spend the day at the cemetery singing Rafi songs and recounting episodes of his life.

How do fans like Nair identify Rafi’s grave now that there is no tombstone left to mark it? “Well, none of us has any concrete proof,” Nair says, “But we know, because this has passed on from fan to fan and even the trustee has acknowledged it. His is the only grave with a coconut tree beside it.”