Man of the Match

VS Achuthanandan may have ended up on the losing side, but he made the Left look respectable even in defeat. 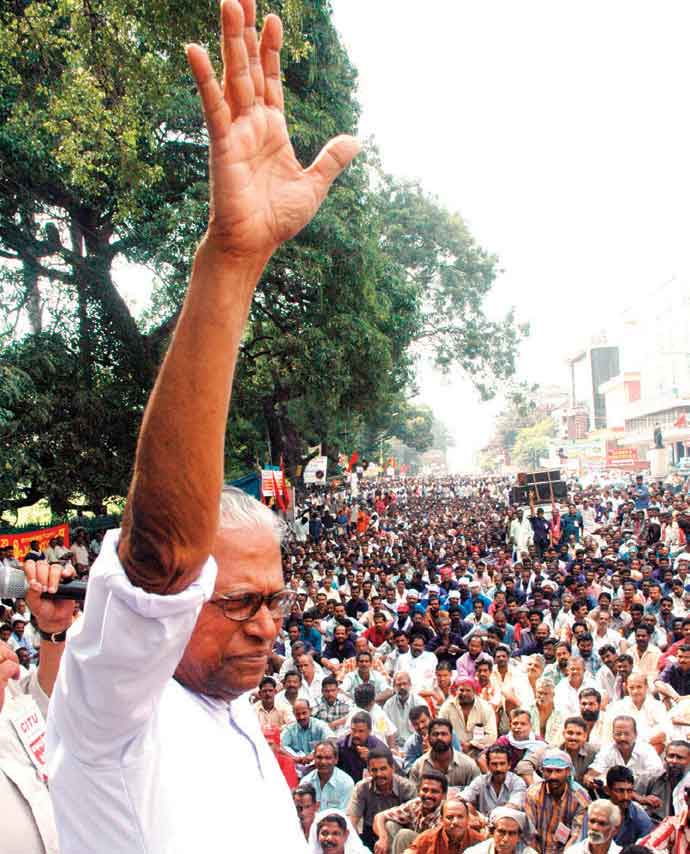 VS Achuthanandan may have ended up on the losing side, but he made the Left look respectable even in defeat.


VS Achuthanandan may have ended up on the losing side, but he made the Left look respectable even in defeat.

His was a Yusuf Pathan act. A blistering knock that took his team from nowhere to the verge of an improbable victory. He may have lost still, but the Left should salute VS Achuthanandan, a man who embodied the concerns, desires and aspirations of the masses.

‘Citizen CM’ Achuthanandan, the only political leader in Kerala who has struck a direct chord with the masses, spoke the language of the marginalised and underprivileged. He showed extraordinary political acumen in identifying and focusing on issues that the mainstream left parties hadn’t bothered to address. He championed the cause of Dalits, of tribals, of women—and the environment.

The battles VS fought are many and diverse. The online lottery fraud, deforestation and largescale encroachment of virgin forests, excessive groundwater exploitation by MNCs, the production and use of deadly pesticides, exploitation of underprivileged women by sex rackets are but a few issues that, but for him, would have languished on the margins of mainstream politics. Achuthanandan made it possible to integrate these questions into mainstream political discourse.

Political analysts count this integration of micropolitics with macropolitics among the most original contributions of this octogenarian communist. Environment, gender, corruption, displacement, “refugees of development” are issues usually left to civil society groups, activists and NGOs—rather than the political mainstream—to articulate.

VS Achuthanandan has also had success in bringing value-based politics back to centrestage. He embodied the desire of the people to fight corruption, and it must be said that he has received great support from the media, especially the electronic media. His critics berate him as a TV phenomenon, but in a state largely governed by televised politics, this is a case of sour grapes. Sure he played the media, and he did with greater finesse than others could manage.

His own party leadership, which has often been at loggerheads with him, has contributed in building his crusader image. It was the state CPM’s abortive attempt to deny him a ticket in this election that flagged off VS’s journey, in which he singlehandedly lifted the fortunes of his party from the abyss of the 2010 Parliament polls and the subsequent civic elections. The bitter infighting in the party succeeded only in strengthening his image as the LDF’s mascot in this campaign. VS was seen on the flexboards of all the left candidates in Kerala, an unlikely practice for the CPM, which abhors the cult of personality. Much to the chagrin of the party leadership, people flocked in great numbers wherever VS made an appearance on the campaign trail. “This is quite a new trend,” said party secretary Pinarayi Vijayan, unable to hide his obvious displeasure over the VS wave.

When Rahul Gandhi took potshots at his age [VS was India’s oldest chief minister], his comeback line, ridiculing Rahul as an “Amul baby,” was lapped up by the crowds. VS was never lacking in the one-liners. His campaign was full of them.

Through his choppy political journey, VS has not been able to stay away from the political limelight. He has always been in the news, for all the right and wrong reasons. For the wrong ones too — a son with a penchant for finding himself in scandals gave much sensational grist to rightwing media. There have been allegations of nepotism too, and he has been critiqued by intellectuals for catering to the moral conservatism of the Malayali public. His slogans against corruption and sex rackets have been cited as evidence.

His conservatism, attempts to foment factionalism, readiness to subvert the party organisation and its rules, and his proclivity for settling scores were not palpable to those keeping an impartial eye on the left politics of the state. But even they cannot deny the fact that VS is solely responsible for making the Left look respectable even in defeat. For a party that hates the cult of personality that is something to chew on.