The suit is out. Dhoti in. English out, Malayalam in. Former UN bureaucrat and Congress candidate Shashi Tharoor is a changed man. But will that take him where he wants to go? 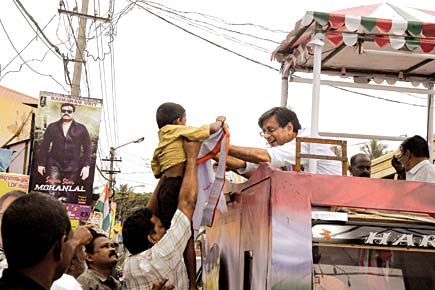 Former UN bureaucrat and Congress candidate Shashi Tharoor is a changed man. But will that take him where he wants to go?


Shashi Tharoor is probably the best-looking candidate contesting the Indian general election, women included. He is contesting on a Congress Party ticket from Thiruvananthapuram, Kerala. His chief opponents are the CPI’s P Ramachandran Nair and BJP’s PK Krishna Das. The CPI is the sleeping partner of the Left Democratic Front (LDF), led by a thuggish CPM. The Congress heads the United Democratic Front of ‘like-minded secular parties’. In the last parliamentary election, the LDF won the Thiruvananthapuram seat. In fact, the LDF swept the state in a tidal wave, winning 18 out of the 20 seats. The Congress got none.

Both Nair and Das are your usual politicians with two or more collapsible chins, pendulous dugs that cry out for D-cup support and waists that tend to test the limits of space. In contrast, Tharoor’s licentious good looks exude an easy confidence and an urbane assurance. Thiruvananthapuram, a capital city of largely colonial habits run by bureaucrats and doctors, is not exactly famous for its Page 3 balls, but if the three of them ever march into a party, Tharoor will be danced to death by coy women with their hair in plait. Nair and Das, chronicles of solitude foretold, will sulk in separate corners behind curtains of dim despair, cursing their parents.

Last week Tharoor stepped into the precincts of the all-women All Saints College, on the breezy Thiruvananthapuram beach front, as part of the campaign, and blew the girls off their polished toes. All Saints College is primarily a boarding college for unctuous—oiled hair, oiled skin, oily food—Kerala beauties keenly preparing for the oblivion of trophy-housewifery. A majority of the resident students are unlikely to have voting rights in Thiruvananthapuram. But campus girls are always a media event, and Tharoor has always been good at seeing a photo-op even where there is none. Tharoor certainly is making a play for the female vote bank. And for good reason. Nearly half of the estimated 11 lakh voters in the constituency are women.

Though the Tharoor posters on the wall show him in the esteemed company of Congress leaders Sonia Gandhi (who campaigned for him last week) and Dr Manmohan Singh (who did not), the main planks of his campaign are the city’s development and his own eternal-sunshine-of-the-spotless-mind image as a man with an international reputation. Posters describe him as Thiruvananthapuram’s window to the world.

The strategy seems to be working. For possibly the first time, all contenders are forced to speak the language of good governance. As Tharoor says in just about every meeting, “I will make this an international city. I will use all my contacts to raise Thiruvananthapuram to world-class levels.” Even if he is not acutely specific just how he would do this, the vision of a middle-class paradise has touched a chord. This is to the disadvantage of the LDF, which has always preferred to focus on large abstract capitalist conspiracies and dangers of caste politics and the Hindu right wing threat as the perpetual forces of political Evil, whose designs can be met only by, who else, the LDF. Tharoor’s developmental politics has stirred the piss in the LDF pot.

The LDF has got back at him. The coastal areas of Thiruvananthapuram are populated by thousands of Muslim families where the LDF has portrayed Tharoor as an ally of both Israel and the US. “The truth is,” Tharoor says, “I have always been a representative of India.”

A typical Tharoor day begins at 7.30 am, with a brief team meeting. And then Tharoor and his team hit the road and stay there till 10 pm. The backroom is managed by Tharoor’s soft-spoken cousin Sharat, a businessman from Cochin, who occasionally breaks into perplexed soliloquies right in the middle of the road on how he got to be drawn into the thick of this mayhem.

Tharoor himself is a far cry from his suited UN days. As one of his assistants says, “Shashi ettan (big brother) is making a conscious effort to be seen as a Malayali.” To prove he’s native, Tharoor has bought a house in Thiruvananthapuram, and regularly confesses to the crowd how he is the proud possessor of a ration card. And he wears a white shirt and dhoti, a costume he wouldn’t have been caught dead in, say, six months ago. It is an extreme makeover of a kind.

Tharoor does his rounds—about 100 roadside meetings a day—on a rigged-up jeep, and speaks at each listed venue for a couple of minutes, throwing to the crowd an occasional towel with Indian tricolour borders. The towel throwing is carefully aimed at old women or young children, obviously for dramatic reasons.

Then, Tharoor speaks few words in colloquial Malayalam. This must sound strange to the ears of the ‘Oo’ (O for ooil etcetera) sound loving Thiruvananthapuramites because of its sing-song diction, which is entirely Palghat, the northern district nearly 400 km away from where he hails.

The rites of a candidate’s passage are fraught. Much preparation goes into it. For instance, specialists in rabble rousing will occupy the deserted venue a good half hour before the candidate’s arrival. The rabble rouser’s job is to take the mike and spit into it hard, harsh words about the opponents. The blows he delivers are mostly below the belt. His job is to make the opposition look like mean little vermin that thrive on corruption, and so set up an audience sympathetic to the saviour.

Like any other place in India, politics, like a tsunami or an accident, is a spectator sport. And slowly, they come, the natural-born Indian Democrats, dropping whatever they are doing—public newspaper reading, fortune telling, dialectical debating, pick-pocketing, road digging, hair cutting, snake charming, whatever— and form a loose ring of curious adepts united by their atavistic need to get out of their boring skin, be engrossed in an activity to which they are responsible only as gazers. The rabble-rouser is John the Baptist. The candidate is Jesus Christ. The sacrificial lamb is the willing crowd.

Tharoor says he enjoys what he is doing. “I believe in this. I want to make this city a better place to live in. I believe politics is a means to development, not an end in itself.”

“I have multiple talents, so I lead multiple lives. Sometimes I do tend to get scattered. But this election work, you can see, is for real.”

For a fleeting moment the hand that feeds the mouth pauses midway in the air. “I will take stock of it at the right time.”

The chances are that on 16 April, when voting commences, he will win. Recent surveys predict that the Congress and its friends will get around 15 seats and the Left, five. But winning here is just the beginning. What sets Tharoor apart from the rest of the crowd is the scale of his ambition. He is here for the long haul. And he is here to win. Even if it means holding on to a slippery dhoti, talking to a strange tribe in their stranger dialect.