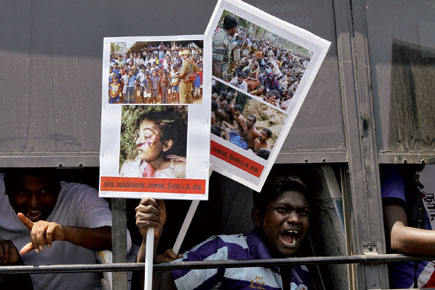 
It took me some time as a Delhiwallah in Colombo to understand how important the politics of the various Dravida Kazhagams and some fringe groups in Tamil Nadu was to Sri Lanka. Soon after I landed in Colombo as The Hindu’s correspondent in 1995, their significance grew on me. Those were days that the Liberation Tigers of Tamil Eelam (LTTE) was running amuck, striking the heart of Colombo time and again. They blasted the Central Bank of Sri Lanka and sent oil storage tanks in Kollonnawa up in flames. If there was an earth-shattering sound, you knew Tamil Tiger terror had struck.

In those pre-internet days, when the fax machine was God, I would get calls about reports published in The Hindu on what one or the other Tamil party had said in Madras (not yet Chennai). I would then pick up the phone and request a colleague in Madras to fax me the story.

If one knew in general terms that the politics of Tamil Nadu was linked to the Tamil-Sinhala politics of Sri Lanka, these calls from Tamil politicians in Colombo, sometimes even from Indian High Commission officials, came as confirmation. At that time, when the LTTE was battering the Sri Lankan state, picking off Tamil leaders like Ketheeswaran Loganathan and Neelan Tiruchelvam, killing innocent Tamilian and Sinhalese civilians alike, there was no protest from the various Tamil outfits in Tamil Nadu.

The LTTE’s reign of terror was total. And, Velupillai Prabhakaran, killed by the Sri Lankan army in 2009, was the unchallenged Tiger-in-Chief. I never mourned his death; he was a ruthless military genius who was responsible for the deaths of tens of thousands of Sri Lankan Tamils, but I did and do mourn the deaths of ordinary Tamils killed by President Mahinda Rajapaksa’s forces around the time the LTTE boss met his end.

Yes, I do think there should be an honest, purposeful and finger-pointing inquiry into the deaths of these innocent Tamils as the Sinhala state triumphantly ‘mopped up’ the remaining insurgents in northern Sri Lanka. But the histrionics of DMK President Muthuvel Karunanidhi and his party’s withdrawal of support from the UPA Government have come four years too late to be taken seriously. The veteran politician could not but have been aware that India gave considerable behind-the-scenes help to the Lankan army as it went about the military campaign to decimate the Tamil Tigers. It was a subtle, dual approach that Prime Minister Manmohan Singh and his government, like others before him, had adopted. Help Colombo militarily, but keep pushing the Rajapaksa government on the issue of Tamil rights. If Karunanidhi were concerned about the fate of Tamils in Sri Lanka, then why didn’t he pull out in 2009 from the UPA? Why wait till now? Because he has nothing to go to the people with, come the 2014 Lok Sabha polls. So, with his senior leaders charged with corruption, the DMK chief is desperate to arm himself with something for the next general election. If nothing else, he will at least go down as ‘the giant defender’ of Tamil interests.

As a defender of Tamil rights, Karunanidhi is in competition with the state’s Chief Minister Jayalalithaa. She has been proactive on this front, recently ordering a school football team home from Colombo, even going to the extent of suspending a sports official. Under her watch as Chief Minister, ordinary Sri Lankans (including Tamils) have been heckled and harried in Tamil Nadu, and at least two monks have been beaten up in the past few days. This makes for a bizarre situation, with ordinary Sri Lankans being attacked and persecuted for the alleged crimes of their government. It makes a mockery of India’s efforts to sustain a good relationship with Sri Lanka and its people. What if these attacks provoke retaliation in Sri Lanka on the thousands of Indians visiting or living in Colombo and other parts of the island nation? What will Karunanidhi and Jayalalithaa do then? Ask that India snap diplomatic relations with Sri Lanka? Or send in troops to defend Indian citizens?

Such a shortsighted approach to problems in Sri Lanka boggles the mind. Are these politicians concerned at all about what impact their actions might have on a country with which India enjoys good relations? The short answer: no. Karunanidhi’s faith in the United Nations and its organs to get justice for Sri Lankan Tamils is touching. We are all aware of the UN’s own record in failing to highlight the killings of Tamil civilians as the war wound down in Sri Lanka in 2009. Barring one statement from the UN, on 14 March 2009, that the actions of the Sri Lankan government and the LTTE ‘may constitute international crimes, entailing individual responsibility, including for war crimes and crimes against humanity’, an internal UN report found that the global body ‘almost completely omitted to explicitly mention Government responsibility for violations of international law’.

Let us not kid ourselves. The draft resolution before the UN Human Rights Council only calls upon Sri Lanka to conduct an investigation of Tamil civilian deaths in 2009. It would be a bit of an embarrassment for Colombo if the resolution is passed in its present form, but nothing it can’t live with. “All the talk about killings and atrocities must be balanced and include also those committed by the Tamil Tigers,” Mahinda Samarasinghe, Sri Lanka’s Minister for Plantation Industries, said at the Council’s meeting in Geneva, displaying little appetite for a credible probe into the actions of the country’s security forces.

The fact is that LTTE forces have been decimated. The fact is that the power of the Sri Lankan State, which demonstrates all the traits of Sinhala chauvinism, is total today. And, it’s not as if Colombo has no friends in the international community—just read the record of the debate on the draft resolution at the Council meeting for details. At the end of the day, any inquiry into the excesses that were committed (according to UN estimates at least 2,683 were killed and 7,241 injured between 20 January and 2 March 2009) during the war can be conducted only with the cooperation of the Sri Lankan State. And, while there is no doubt that the government should be pressured to conduct a credible investigation, the record of the past four years has shown that Colombo has little interest in a real probe.

It’s not just that President Mahinda Rajapaksa and his brothers were responsible for taking the war to the Tamil Tigers (and to innocent Tamil Sri Lankans), it’s that there is no space for justice or Tamils under the Sinhala brand of politics that the Rajapaksas have patented. Realists would believe that after a massive victory in a bloody war that lasted a quarter of a century, the president would think it a good idea to codify and give greater rights to the country’s Tamil minority to forestall future disaffection. Instead, we see that the minimal 13th amendment to the country’s constitution enacted in 1987, which sets up provincial councils, is up for question. Far from getting more rights, there is every chance that Sinhala chauvinism may lead to the repeal of that amendment.

Much as we would like foreign governments to do what we want them to, they are sovereign entities with minds of their own. Rather than talk down to them, or pass resolutions in Parliament, it would be far better to engage them and hope they see reason in the future—or that the next government is more receptive.

If Rajapaksa is pursuing his brand of chauvinist politics, Karunanidhi and Jayalalithaa are practising the competitive Tamil Nadu kind. None of them is interested in the rights and aspirations of Sri Lankan Tamils.

Once again, Indian foreign policy is at the mercy of regional satraps. Not Mamata Banerjee this time, but Karunanidhi and Jayalalithaa. Any foolish dramatic act of ‘support’ for Sri Lankan Tamils by New Delhi to save the UPA Government would have long-term implications for India’s relationship with Sri Lanka. Moreover, letting Tamil chauvinists attack innocent Sri Lankans in Tamil Nadu is not justice. Nor is it good policy. It is just lunacy.

Amit Baruah, an independent Delhi-based journalist, was The Hindu’s correspondent in Sri Lanka from 1995 to 1997. He’s on Twitter @abaruah64