Loyalty and Its Symbols

Tibetan flags may have fluttered in Tawang briefly before the Dalai Lama’s visit, but the local people are keener than ever to assert their Indian identity 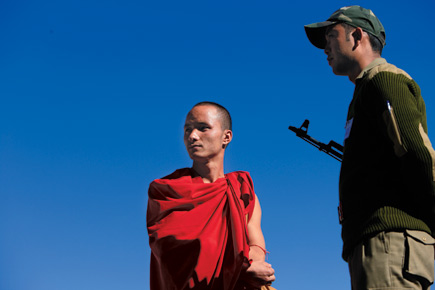 Tibetan flags may have fluttered in Tawang briefly before the Dalai Lama’s visit, but the local people are keener than ever to assert their Indian identity.


A couple of days before Jetsun Jamphel Ngawang Lobsang Yeshe Tenzin Gyatso, or the 14th Dalai Lama, landed in this picturesque town nestled in the folds of the Eastern Himalayas, Tibetan flags were fluttering proudly, and somewhat defiantly, here—as they used to some six decades ago. The only difference between then and now is that till 1951, the people of this town, and the inhospitable but breathtakingly beautiful mountains surrounding it, were forced to accept Tibetan suzerainty. It’s a voluntary act now, it seems, a show of solidarity with the Tibetan cause. Monpa tribals, native to this place, were unhappy subjects of their often oppressive Tibetan rulers. Today, with fortunes reversed—while their erstwhile Tibetan rulers are the persecuted lot and many have had to flee their country, Monpas are free citizens of India—the people here display a comfortable camaraderie with Tibetans. For, the Dalai Lama is only their religious head now.

Tawang, and the West Kameng district of Arunachal Pradesh it lies in, had been under Tibetan political and administrative rule, save brief periods of Monpa rebellion when they would assert their independence. But forces sent by Lhasa would always quell such revolts and re-establish Tibetan suzerainty over this place. At the contentious Shimla conference in 1914, the British Raj acquired Tawang and this district. Sir Henry McMahon, the British representative at the conference from which the Chinese delegation stormed out, and Lochen Shatra, his Tibetan counterpart, delineated the border. The McMahon line, as the border is called now, put this district within British India. However, the British never attempted to establish administrative control over Tawang, and Tibetan rule remained in place. For four years after 1947, New Delhi also continued with the policy. “It was only after the Chinese invaded and annexed Tibet in 1950 did India decide to bring Tawang under its administrative control. In February 1951, Indian Army soldiers and officials arrived at Tawang and the Indian flag flew for the first time over this place then. The Monpas, fed up with the cruel Tibetan rule, aided the Indians,” Dorjee Kelsang, a researcher of history, tells Open. Interestingly, while China remained silent on the establishment of Indian political and administrative control over Tawang in 1951, Tibetans protested vehemently and kept insisting for many years that Tawang was an integral part of Tibet, an assertion China has since taken up. But local Monpas are equally vehement in rejecting these claims. “We may have been ruled over by Tibetans, but we were never part of Tibet. We were forced and unwilling subjects of Tibet,” says Tetsen Khempa, a senior citizen and academic. Old-timers recall the despotic days of Tibetan rule. “Our forefathers had to pay steep taxes. Tibetan laws allowed our enslavement, and forced labour was common. Monpas were miserable under Tibetan rule,” says Lobsang Tashi, an octogenarian who acted as a guide to Indian soldiers and officials who came here in 1951. “We were happy when we became part of India in 1951 because that meant an end to the tyrannical Tibetan rule,” adds Tashi.

One would expect Arunachal’s Monpas to nurse a sense of residual anger against Tibetans, but that’s totally absent. This is evident in the enthusiastic welcome accorded to the Dalai Lama and the reverence in which they hold him. The Dalai Lamas, after all, had also doubled as political and administrative heads of the Tibetan government, as does the 14th Dalai Lama now (he heads the Tibetan government-in-exile). Monpas have an explanation for that: “The Dalai Lamas didn’t meddle in administrative matters and only concerned themselves with spiritual matters. The powerful administrators under the Dalai Lamas were oppressive, but the Dalai Lamas knew little or nothing about the sufferings of their subjects,” says Khempa. And the present Dalai Lama was, anyway, too young to know anything of the sufferings of Monpas, he contends. “The Dalai Lama is our revered religious head. He’s venerated by all of us. But we’re Indians,” affirms Dorjee Khandu, Arunachal’s Chief Minister, a Monpa himself.

Any Monpa you meet is likely to be assertive of his or her Indian identity, at times more so than people in other parts of the country. The people are also fluent in Hindi and celebrate occasions like Independence and Republic day with a gusto that isn’t evident among common citizens elsewhere in India. “This is perhaps because of the repeated Chinese claims over us. Every time the Chinese say that Tawang, or Arunachal Pradesh, is part of Tibet—and hence China—the people of our state reassert their Indian identity to prove that China’s claim is baseless,” says a senior minister who doesn’t want to be named.

China’s claim is partly based on the fact that Monpas were once under Lhasa’s rule, and that the sixth Dalai Lama, Tsangyang Gyatso, was a Monpa born near Tawang in 1683. “Such claims are ridiculous. The Tibetans conquered us and forced their rule on us. We were never willing subjects, or citizens, of Tibet. That the sixth Dalai Lama was born here offers no basis to any contention that we were Tibetans. It amounts to saying that Pakistan can lay claim to Delhi because Pervez Musharraf was born there,” says the anonymous minister, a close aide of the CM.

Tawang is important to China for many reasons. By asserting that this area was once part of Tibet and ought to be made part of the ‘Tibet Autonomous Region’ again, Beijing wants to be seen as an advocate of Tibetan interests. Chinese academics and intellectuals have often said this: Professor Ma Jiali of China Institute of Contemporary International Relations has been quoted as saying that, “Tawang goes beyond territorial issues…we want to win the hearts of the Tibetans and by laying claim to Tawang, we’re being seen as protecting Tibetan interests”. China’s claims over Tawang are, thus, aimed at giving its occupation of Tibet a religious and cultural legitimacy. This place is also strategically important as a critical corridor between the Tibetan plateau and Brahmaputra valley. “Whosoever controls Tawang militarily can also control Brahmaputra valley,” says an Army officer. This area, or at least its lower reaches like the Dirang Valley, is very fertile and its farms once used to provide sustenance to the barren Tibetan plateau. “That’s why the Tibetans used to rule over us,” says Tashi.

The Galden Namgey monastery in Tawang—the second largest monastery after the Potala Palace in Lhasa—is a virtual treasure trove of Tibetan Buddhist culture. Beijing believes that raising the pitch over Tawang will help it win the allegiance of Tibetans. But Tibetans, at least those who’ve sought refuge in India, aren’t backing China’s claims. The 14th Dalai Lama has, in fact, been saying that Arunachal Pradesh, and Tawang, are an integral part of India. He had, however, hinted during an earlier visit to Tawang that this place used to be ruled from Lhasa, a mention that incurred New Delhi’s displeasure at the time. But since then, he has unfailingly been rejecting China’s claims on this state. As he did during his visit to Tawang this time too.

For Arunachal’s Monpas, the Dalai Lama is only a religious head. And being free of Tibetan tyranny, they’re comfortable expressing solidarity with a cause that the Dalai Lama represents. That’s their explanation for why they happily hoisted Tibetan flags two days before the Dalai Lama landed here on 8 November.
The flags were hastily removed when the local administration realised that allowing them to flutter in the cold mountain breeze of Tawang would only serve to reinforce Tibetan, and Chinese, claims on this land. Only Buddhist prayer and religious flags now adorn this town and its surrounding snow-clad mountains. And the Indian tricolour, of course.