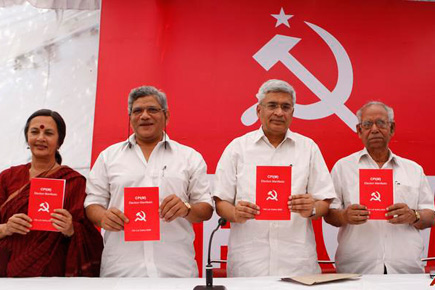 
Through much of the term of UPA II, as opposed to UPA I, even the opponents of the Left have realised the importance of this political formation in Indian politics. The UPA II, without the Left acting as a check, is dangerously adrift, and the successful tenure of UPA I now looks more the exception than the norm. Significantly, as an ally of the UPA, the Left largely acted as a unified whole. It is only at the crucial stage of withdrawing support to the UPA over the Nuclear Deal that differences between the CPI and CPM came to the fore.

The importance and relevance of the Left in those few years underlines why the unity of the CPI and CPM, the two main Left parties that believe in multiparty democracy, is of importance at a time when there is growing disenchantment with the two large political formations—the Congress and Bharatiya Janata Party (BJP)—at the national level. In India, unlike in most democracies, the space occupied by Left democratic formations has largely been vacated. In that context, CPM Politburo member Sitaram Yechury’s remark, “Well-wishers of the Left in India want the CPM and CPI to merge as soon as possible,” demands attention.

Yet, the merger of the two parties, both subscribing to distinct programmes, is easier said than done. Even inside his own party, Yechury has stirred a hornet’s nest by saying something that CPM leaders have been trying to avoid. According to a Politburo member considered close to CPM General Secretary Prakash Karat, “I don’t know in what context and in what capacity he [Yechury] made this comment. As far as the party leadership and party forums are concerned, we have not taken up such an issue for discussion in the recent past.” Karat himself has preferred to remain silent. For, he may risk a serious loss of face among those who sympathise with the Left but stand outside his party.

The last time the issue came up in a big way was in 2005, a few months before Harkishan Singh Surjeet handed over the reins of the party to Karat. At the time, Surjeet snubbed CPI leader Bardhan’s overtures calling for the creation of a single communist party in the country by merging the CPI and CPM. Surjeet’s rejection of the idea killed the debate right there, but the incident was neither the beginning nor the end of the love and hate relationship between the CPI and CPM.

The two parties were at loggerheads for one-and-a-half decades, after the CPM carved itself out of the CPI in 1964. In 1978, in the anti-Congress atmosphere after the Emergency, the CPI at its party congress held at Bathinda, Punjab, for the first time put forward a proposal for the ‘unity between the two parties in building the Left and democratic front as a real alternative to the bourgeois-landlord class rule’. This was followed by joint mobilisations and electoral alliances between the two parties. But in 1985, a bitter debate ensued between the leaders of the two parties over the basis of the split in 1964, the character of the CPI and CPM and their respective approaches to the application of Marxism-Leninism to the Indian situation.

On the CPM’s side, Surjeet wrote a series of articles that were later compiled in the form of a booklet, published in October 1985 and circulated and debated widely in the party. On the side of the CPI, leaders like C Rajeswara Rao, Indradeep Sinha, N Rajasekhara Reddi and Jagannnath Sarkar took up cudgels. These articles, which were compiled the same year (November 1985), generated heated debate at different levels in the CPI.
The two sets of articles, which are of great scholarly value otherwise, ended up further hardening positions within the two parties. Yet the joint mobilisations and electoral alliances between the two continued. After the 2005 episode, the loss of West Bengal and the consequent crisis in the CPM (read Advantage Buddhadeb) has rekindled the issue, though in a completely different manner. What distinguishes Yechury’s remarks from the previous efforts is the fact that this is the first time the issue is being raised by a leader of the CPM rather than the CPI.

Even now, it is clear that there are many issues that would keep them apart. These are likely to be in the nature of polemics, on the character of the Indian state and ruling classes or the particular stage on the road to revolution that India is now at. But the fact remains that these doctrinaire differences are irrelevant to the actual practice of politics by both parties. The differences exist only in theory, not in practice. Unity must be a matter of practice, born of the need for a formation that fills a vital space in Indian politics.