Learning from the 2009 experience, Left leaders propose a policy platform and shy away from any talk of a third front 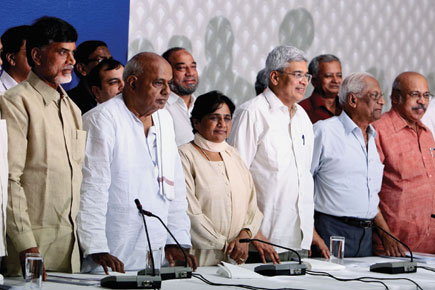 Learning from the 2009 experience, Left leaders propose a policy platform and shy away from any talk of a third front


Charged times often make for charged politics, but decisions taken at such times produce results that may not always be what a party intended. This is especially true for the Left parties, who have learnt the lesson of moving slowly after the heavy price they have paid for mistakes committed almost five years ago. Taken in then by their own third front rhetoric, their decision relegated them to the margins of Indian politics.

In 2009, ahead of the previous Lok Sabha elections, when the air seemed to be charged with debate over the Indo-US civil nuclear deal, CPI-M general secretary Prakash Karat, along with Mayawati of the Bahujan Samaj Party and some other regional allies, tried to prop up a third front. Leading the Left parties, Karat declared that the time had come to throw out both the Congress and the BJP. The result, however, was quite the opposite.

Not only did the Left’s strength in the Lok Sabha fall drastically, that third front adventurism, many argue, pushed the Congress party into the arms of Mamata Banerjee’s Trinamool Congress in West Bengal, thus creating the ‘Mahajot’, which ruined the Left’s chances in the subsequent Assembly elections in the state. Though it is true that a series of factors contributed to the Left’s decline in West Bengal, of which the Buddhadeb Bhattacharjee government’s faulty industrialisation and land acquisition policy was certainly one, the unity of opposition votes in the state was triggered primarily by the political line pursued by CPI-M leaders in Delhi.

This time around, in the run up to the next Lok Sabha polls, the Left parties have been moving rather cautiously on a similar track, vowing to build an alternative policy platform and declaring in the same breath that this has nothing to do with a third front. Instead of asking non-Congress secular parties to enter into a pre-poll alliance, the Left has called on these parties to support a policy platform that would provide an alternative to the course being pursued by the country’s two major parties.

For this purpose, the Left parties will hold a national convention in Delhi on 1 July where a declaration concerning their approach to an alternative policy direction is likely to be made. “On the basis of this declaration, we will appeal to all non-Congress, non-BJP secular democratic forces and parties to support and work for an alternative policy trajectory for the country,” CPI-M politburo member Sitaram Yechury told Open. Asked whether the Left would take the initiative to forge a front comprising those parties converging on the alternative policy platform, he said: “Fronts will not come out of the atmosphere. There have to be alternative policies on the basis of which parties will gather together.”

The move is vague—the Left is wary of the idea of a third front before the polls, but it wants to come together with the regional parties outside UPA and NDA on a common platform. Yechury pointed out that in a fast-changing political scenario, in which the Congress is bereft of all major allies except the Nationalist Congress Party, and the BJP is left with only its two little friends the Shiv Sena and the Akali Dal, there is a clear opportunity for such a policy platform.

It remains to be seen which regional parties the Left is able to attract, and whether these parties will remain committed to the policy platform after the polls. The fact is, most of the regional parties the Left is eyeing today have, at one time or another, been part of an alliance with either the BJP or the Congress and would once again be susceptible to such a possibility, depending on their own political considerations after the election’s results.

Yet the Left’s move is still significant. In essence, the Left is seeking to develop a “common minimum programme”—as CPI-M politburo member and former West Bengal Chief Minister Buddhadeb Bhattacharjee put it a few days ago—and trying to have it endorsed by some of the secular regional parties that remain unattached to the Congress or the BJP. This would stop short of evolving into a third front, which has always proved to be temporary in nature and which, in the 2009 polls, was blamed for dividing the secular vote. Such a move, says a senior Left leader, would be even more counterproductive at a time when Gujarat Chief Minister Narendra Modi is leading the charge of the BJP.

Left leaders also expect the move to help them score over their arch rival in West Bengal, Mamata Banerjee. On the eve of Bihar Chief Minister Nitish Kumar’s break up with the NDA, Banerjee had appealed to all non-Congress, non-BJP regional parties to come together and float a federal front for the 2014 Lok Sabha polls. After the initial enthusiasm shown by the Janata Dal-United and the Biju Janata Dal, there was no further forward movement to form such a front.

After parting ways with the BJP, Nitish Kumar has suddenly developed a liking for the CPI. Speaking at a seminar in Patna on 24 June, Nitish went to the extent of saying that “the proposed federal front is not a political formation. It is, rather, an economic agenda to ensure compensation for states left behind owing to the policies of the centre.” Navin Patnaik, for his part, seems to have preferred to wait and watch instead of jumping onto Mamata’s bandwagon. This, despite the fact that Nitish and Navin are at one with Mamata on their demand for special status for backward states. The Left parties are not averse to this demand, and the issue is likely to figure in the declaration they are due to adopt on 1 July. The agenda is intended to be broad-based, instead of restricted to a single-point charter for a front.

Moreover, as the move is devised to remain a policy platform and not a front competing with the Congress for votes in next Lok Sabha elections, the Left will also have the advantage of keeping the grand old party in good humour. This is necessary in order to prevent the Congress in West Bengal from gravitating once again toward the Trinamool Congress. There is a growing feeling inside the CPI-M that if it has any chance at regaining even a little of the ground it has lost in the state, it is only if the Congress and the Trinamool do not come together again.

For this reason, despite the Left leaders’ meetings with important figures from the JD-U, Samajwadi Party and BJD in last couple of days, there has not been any talk of an all-India front. On the contrary, Left leaders have used every opportunity to declare that their initiative must not been seen as a move to cobble together an electoral front. “The Left parties are aiming at changes in social, economic and political policies,” CPI-M General Secretary Prakash Karat told reporters in Thrissur on 14 June, just when Mamata’s call for a federal front had captured headlines. The same day, politburo member Brinda Karat told media persons at Palakkad that her party viewed “alternative policies and politics” as more important than forming a third front. “Evolving alternative politics and policies against the Congress and the BJP is our goal and that is important,” she said. Yechury and the party leaders in West Bengal have also repeatedly stressed this same point.

That leaves open the political conundrum—which may seem remote now but could become real in case the next Lok Sabha election throws up a divided House—of what the Left would do if its support were critical to keep the BJP out of power. “That would be the acid test for us,” says a senior Left leader, preferring to remain anonymous. “The decision that we take then would decide the fate of the Left and secularism in the country.”