Lalu Prasad Yadav: A Caricature in Search of a Cartoon

Lalu Prasad Yadav’s political journey of farce is almost over 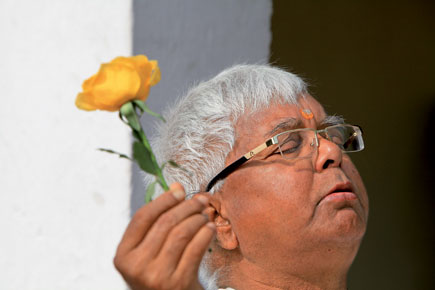 A decade ago, I spent a few days with the late artist Nek Chand at his Rock Garden in Chandigarh. He had a tremendous sense of humour and told me that he wanted rubbish and garbage to entertain so people would not condemn them as waste. Waste, he felt, was the basis of a new civics and philosophy. He was a great collector and one of the things that fascinated him were cartoons of Lalu Prasad Yadav. Nek Chand wanted to create his rag dolls. Lalu was a symbol of a world he wanted to understand. Nek Chand was a bit cryptic but one sensed he felt Lalu was a symbol emblematic of a certain politics. He hinted that the cartoon and the stuffed doll was the real Lalu.

At that moment, one did not fully comprehend the hint nor did one follow up the conversation. Yet, watching Lalu now I realise there was a brilliance to Nek Chand’s sense—Lalu was a caricature of himself and this constituted the stuff or stuffing of his real politics. As a symbol, he was populist, earthy, homely as cow dung, at home with his cows roaming in his backyard, creating a message of rusticity. Lalu might have been a part of Jayaprakash Narayan’s politics but his world stemmed from the akhada. Violence was accepted as a part of life and a rustic physicality was part of his masculinity. His language, his food, his family exuded an indigeneity which projected a new authenticity. If the Nehrus and the Gandhis were aristocratic and distant, Lalu played salt of the earth. He was the populist politician as new hero. If Rajiv and Sonia represented Delhi Durbar, Lalu and Rabri represented or parodied it as the Patna Durbar. This much was clear. Lalu was a performance and his performative rhetoric, his bodily style, gave a new edge to politics. It was as if his populism gave democracy a new dialect people felt home in.

Lalu was unapologetic about his politics. His explanations were both homely, earthy and a trifle threatening. It was a ‘take it or leave it’ bonhomie that fascinated journalists. They initially saw in this rustic socialism incarnated as electoral populism, a more authentic politics. Lalu’s populism was homely, inclusive, earthy, a trifle contemptuous of Delhi, of English. It celebrated Bihar despite its corruption, violence, backwardness. It gave a new legitimacy to caste politics of an OBC kind making mincemeat of Congress.

His message and ideology was pure Lalu. It was crude, simple, and simplistic but people read meaning into it. They felt they were tuning in to the heart of India. He played his role as the first politician and first family of Bihar with élan. He was a narcissist obsessed with the elaborations of himself. His populism combined with socialism added the right mix to electoral politics which saw in Lalu a voice of authenticity, democracy, reservation, justice—the new rustic as hero in politics. Lalu connived with his own image realising people were both laughing at and with him. Antics did not bother him because what he needed was attention. His critics looked effete as if they were carping on his table manners as he dished out food for thought as the new stuff of politics. Lalu was vitaminising politics at a time it was starved for ideas. A bad idea whose time has come is more effective in the hands of Lalu than a good idea, which looks heavy and procedural.

Lalu’s entry into politics was perfect. India would have invented him if he had not emerged. He exploded in the final moment of leftist ideology when Marxism had become too abstract or too collective, when one needed a face, they offered a politburo. Socialism provided ideology’s face through the incarnation called Lalu. Lalu had shades of Lohia and JP, but he was also self-made. Electoral politics at its peak must be a B-grade movie and Lalu had all the masala ingredients for politics.

Elementary my dear Lalu, was the new refrain of politics. He reflected not just a celebration of populism, but the framing of a spectacle. The politically incorrect, even the threateningly obscene was taken as an example of authentic politics. He represented ruralism by keeping a few cows in his house. Yet behind this display of OBC politics was an aspirational search to be part of the elite. His attempts to encourage his son to enact a Dhoni was not quite successful. His linkages with dacoitry and kidnapping as ways of deficit financing, represented governance as a new kind of lawlessness. Lalu raj became gunda raj and jungle raj while the disorder he created was seen as a cultural churning; a cultural prelude to a new politics. All it was, was politics as a kind of conspicuous consumption with Lalu playing like the Gandhis—the first family of politics and first family of crime, with Sadhu Yadav getting pride of place in the family album. Populism created a conspicuous politics where every act of the leader was messiah-like, creating a new cultural norm. His emptiness was only masked by violence. The fodder scam, in fact, was the example of Lalu’s governance. As one investigator confessed, corruption in Bihar was like a chain of being. One could not violate an individual and punish him. Each implicated another and the chain of connectivity flowed into society.

Lalu-style emptied socialism of content. It was not about equality or distribution but merely about OBC caste claiming their numerical share of the cake. At the most it could appeal to the lesser OBC joining dominant castes into cutting the electoral cake. In fact, when Nitish came to power, it was greeted by a sign of relief. There was no great innovation in governance, just a lessening of the jungle politics, the disruption of law and order we euphemistically called Lalu raj. Media was so hysterical, so desperate for change that even Lalu’s promissory notes of disorder, his clichés on caste politics, were read as a sign of progress. Yet, as Lalu stretched like an old serial, repeating himself, one realised the limitations of the old populist socialism. Lalu mimicking himself was doubly empty. The original had little to say and the imitations even less. Today Lalu Prasad Yadav is yesterday’s newspaper and in fact does not even evoke nostalgia.

The lines are being drawn in a different way. There is Nitish on one side putting together a caste mathematics, which claims to look inclusive and Modi and BJP, which creates alchemy, a chemistry with the masses offering governance, a new stone of excitement about political possibility. The Congress has less to say because it is still playing second fiddle to the mnemonic called Lalu.

The new electoral battle is a two-way struggle. The charisma resides around Nitish and Modi. They seem to create a politics of substance compared to Lalu. In fact Lalu’s presence is important in a negative way, because people in Bihar now know whether Nitish or Modi, it is time for governance beyond decades of incompetence. Even now politics has not changed much. Criminality is still the identity kit, which allows entry into parliament. Caste is still the only mathematics Bihar understands. For all the great movements its politics might produce, the moment of electoral reckoning goes back to caste. Nitish and Modi still stick to the grammar of caste constituencies even if they modernise it with talk of development or governance. To cite a terrible pun in Bihar—“The die is caste.”

Both Modi and Nitish had the right framework for Bihar politics. Both promised a giant wave of change without disturbing the categories or grammar of politics. Everything new was claimed and nothing new was being said. Only each said it differently. Lalu must be feeling cheated to see two lesser brands make it. He must be surprised that brand Lalu, which was a diacritical mark for Bihar no longer worked. Partly it was a generational change. The older generation still talking ideology and justice might have voted for his rhetoric but the new aspiring generations want some semblance of competence called governance, some inkling of change called development. A mere populist idea of electoral politics without development or governance was seen as a desiccated offer and Lalu is just that. He can protest loudly but he knows his best lines now belong to his opponents. He scums like an old Bollywood or Bhojpuri star watching younger actors steal the show.

Yet Lalu knows he cannot be content with a character or lame role. He wants to hog the limelight and history is in too much of a hurry to give it back to him. At best he can be a hyphen to a bigger force, at his worst, he can play spoilsport realising that he no longer has his mojo. Both charisma and destiny have deserted him. Even if he makes a difference, it will be the power of a fragment or a fraction. The politics of his ego will not survive that. Jail is tolerable but a reputation that constantly shrinks is something he cannot live with. The louder he gets the lesser he will become. The tragedy of Lalu Prasad Yadav is simple. His history began as a comedy and will end as farce. India’s great caricature will fade out as an ordinary cartoon. History cannot be more unfair to a politician who had the potential to be a myth, but who is now a mask of his void self, a living obituary to a dynamic long dead. Amen.