Believe it or not, Raj Thackeray’s MNS is wooing Muslims in Maharashtra even as it attacks Hindi speaking leaders like Abu Azmi. The party spies votes in yet another divide—and Bal Thackeray’s Shiv Sena seems ready to follow suit 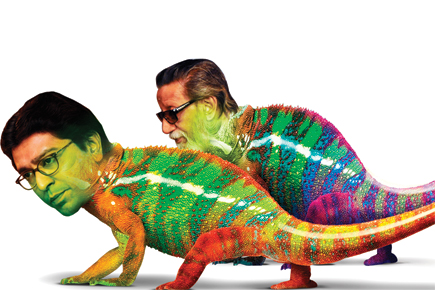 Believe it or not, Raj Thackeray’s MNS is wooing Muslims in Maharashtra even as it attacks Hindi speaking leaders like Abu Azmi.


On 4 November, Muslim employees at the 19-storeyed Haj House in South Mumbai were taken by surprise by the loud sloganeering at the gates. Surprise turned to shock when they realised that the angry-sounding placard wavers were from Raj Thackeray’s Maharashtra Navnirman Sena (MNS). On closer hearing, it turned out that they were demanding a larger quota for Maharashtra’s Muslims bound for this year’s Haj pilgrimage to Mecca.

Claiming that Muslims from North India had been allotted 35,000 pilgrimage tickets, five times the number given to Islam’s Maharashtrian adherents, the MNS was determined to set things right. By the evening of 4 November, the party had stirred up unrest among those who’d been ‘wronged’. Haj quotas being such a salient issue among devout Muslims, enjoined by faith to undertake this journey once in their lifetime, the MNS protest has become quite a talking point for them. Consider the context. There is a patronage system in place, and there are the grumbles that go with it. Swarmed by pilgrims, the Saudi authorities cope by restricting each country’s contingent size, which in turn gives the Haj Committee here—its power underlined by its control of state subsidies—a chance to assign sub-quotas and draw up lists. It’s the kind of clout that can transform itself into a tool for the shaping of hierarchies and playing of power games.

The MNS has clearly spotted a raw spot to make its intervention in minority affairs. Mumbai’s Muslims have been cautioned from mosque pulpits against the party’s designs, but there is little doubt that murmurs seeking quota redressals have been picking up.

So, what explains Raj Thackeray’s sudden concern for Maharashtrian Muslims? The ‘Maharashtrian’ part, it would seem. The protest is in keeping with his politics of identity, a linguistic identity. This time, he is busy widening the gulf between Marathi- and Hindi-speaking Muslims in the state. The former, it appears, are acceptable to the party. The latter are not. Even the MNS’s assault on Samajwadi Party leader Abu Azmi, who was heckled and slapped by MNS legislators on 9 November for taking his Assembly oath in Hindi, seems to fit in with this strategy. “We have always seen riots and trouble in parts of Mankhurd and Malegaon,” says Haji Arafat Shaikh, vice-president of MNS, “which have a large number of North Indian Muslims.”

Officially, the MNS defines ‘Maharashtrian Muslim’ as any follower of Islam domiciled in Maharashtra, even if Hindi-speaking. However, this doesn’t include Muslim migrants from Uttar Pradesh and Bihar. True Maharashtrian Muslims, expounds Shaikh, are those whose problems are similar to those of Hindus. “They see Raj saheb as their leader who has been fighting for their cause,” he elaborates, “These Muslims have always been given a raw deal in the state.”

To grasp the finer aspects of this distinction, consider this: Hindi-speaking Muslims outnumber their Marathi-speaking counterparts in the state. According to Shaikh, any Muslim who can produce documentary evidence of having been a state resident for 15 years or more would be eligible for MNS ‘protection’. The green colour in the MNS flag, he adds, is symbolic of this generosity. Moreover, in the recent Assembly polls, the party did well in the Muslim-dominated areas of Mahim, Sewri, Vikhroli and Kalyan Rural.

Such talk may sound reassuring to some residents of Mumbai who might possibly need the party’s ‘protection’, but obviously not to all. Take the case of Aseem Khan, 45, who shifted to the city from Jaunpur in UP three decades ago with his parents. The family settled in the Muslim-dominated Bhendi Bazaar area in South Mumbai and dabbled in textiles. Khan took over the family business and has been fairly successful. But today, he is a worried man. “Does the MNS want to start riots among Muslims?” he asks, “The Haj quota is a very important issue and Muslims can be easily provoked due to their high illiteracy. Someone must stop the MNS.”

Scepticism of Raj Thackeray’s intentions also takes other forms. The Shiv Sena’s stance vis-à-vis Muslims is well known, notes a Muslim doctor from the Sir JJ Group of Hospitals who prefers anonymity, and the MNS is full of former Shiv Sena leaders like Shishir Shinde. “He dug up the pitch at the Wankhede Stadium to protest a scheduled India-Pakistan cricket match in 1991,” he recalls, “Muslims must not forget his hatred. How can such a man help and protect Muslims?”

There is also some disbelief within the larger saffron fold. Vinod Tawde, BJP general secretary and Legislative Council member, dismisses the MNS’s Haj gambit as just another vote-catching ploy. “There are not many Marathi-speaking Muslims,” he says, “If Raj Thackeray can support Hindi-speaking Muslims, then why is he opposed to Hindi? He has started speaking the language of the Congress. The MNS has its eyes on the civic elections in Mumbai, Thane, Kalyan and Navi Mumbai—hence they are wooing Muslims. Why is Raj Thackeray demanding a Haj quota and subsidy; why is he not asking the same for the Amarnath Yatra?” To many people who think alike, and there are many, it’s a question that prompts itself to the lips at the very mention of ‘Haj’.

The Shiv Sena, of which the MNS is a splinter, has been watching all this closely. Bal Thackeray, notorious for his anti-Muslim exhortations during the Mumbai riots after the Babri Masjid demolition of 6 December 1992, appears to have concluded that his estranged nephew Raj is onto something. But what? Good question. Newly elected Sena legislator Ravindra Waikar—who was indicted by the Justice Srikrishna Commission Report for inciting a mob in Jogeshwari against Muslims during that gory episode of bloodletting—has been talking about burying the past. “I want to work for the development of Muslims,” he has announced, “They have not got their due from the Congress, which in the name of secularism used them only to gain power. I will work for neglected Muslims who are merely vote banks for the Congress.”

Sena sources say that Waikar is echoing the sentiments of Uddhav Thackeray, the supremo’s son and executive president of the Sena. “The defeat in the Assembly polls has indicated that politics of inclusion will get us more votes than excluding an entire community with high density population,” says a Sena legislator,

“If we have to retain power in the Municipal Corporation, we have to get Muslims on our side.”

The 1990s’ saffron wave has receded, and Uddhav Thackeray is aware that further electoral losses could spell the Sena’s doom. He has made noises in the past about ‘inclusive politics’ to soften the party’s hardline Hindutva appeal, but it didn’t find takers. This time, his cousin’s Haj protest may have spurred another attempt at re-casting the Sena as a party of pluralism—at least when it comes to the game of seeking votes.

At the end, the realpolitik here is about local structures of dependence. But if the Haj Committee has broken into a cold sweat, it is not showing it. The Congress, on its part, wants to wait and watch from the lofty jharokas of its comfort zone—or what it assumes is one.