Jairam Ramesh and the Radiation Threat

Sir, did you know that the book you endorsed was bullshit? 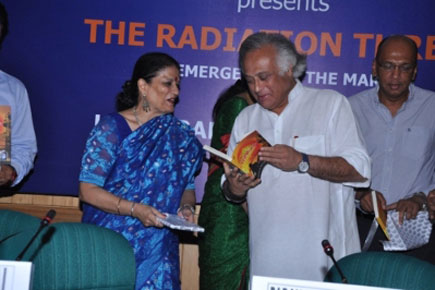 Sir, did you know that the book you endorsed was bullshit?

When one IITian meets another in any part of the world, the first moments are invariably silent tributes to the cult of logic that both once owed or still owe allegiance to. The nerd code compels him to grant the other some respect, for they have both fought hard—for the marks, for the elusive women, for the money, for the name—and still have battles to wage. But the thing an IITian finds hardest to digest from a fellow IITian is a lapse of logic. I would know. I am an IITian.

It is with these feelings that I sat through your speech at Delhi’s India Habitat Centre as you launched a book titled The Radiation Threat written by Harsaran Bir Kaur Pandey.

I was not familiar with the author. The book itself didn’t seem interesting. But I was still clinging to your words as you made general statements about how the country needs technological advancement without losing sight of its ill effects and how this book has come at just the right time. Now, if you are promoting a book that pertains even remotely to science, I would listen to you, Mr Ramesh. Your credentials are endorsed by one of the holiest academic trinities I can think of: IIT-Bombay, Carnegie Mellon University and MIT. So the initial look of surprise on your face on seeing the innocuous looking chip given free along with the book (‘enclosed to minimise radiation effects’, as the book sleeve claims) and your casual acceptance with a plastic smile made me wonder if you had any idea what you were promoting.

Allow me. The Radiation Threat is an unsubstantiated and delusional piece of writing that promotes Vaastu and feng shui and ‘geopathic stresses’. I call it unsubstantiated because the ideas that the author puts forth as facts are under-researched and riddled with ambiguity—a panelist at the launch who represented the Centre for Science and Environment confessed as much, though more politely. Even modern architects who specialise in eco-friendly design do not think much of such ideas. Plus, the author cites common websites such as Wikipedia and Wisegeek.com to further her arguments. I call it delusional because, well, sample this: ‘For hundreds of years,’ writes the author, ‘the Chinese have been warning us about disturbing ‘Earth dragons’, or the natural energy lines deep within the bowels of the Earth. They believe that large-scale development activities like blasting for mining, road and rail building, and constructing dams injures the Earth, releasing negative energies…’ Ah. So that’s why the Chinese have us all in such a flap.

The book is filled with instances such as this one, and if I were to pick on each of them, I could probably write enough to fill an entire issue of Open. The chip that caught you offguard, by the way, is a small rectangular rubbery thing for you to carry around, which is supposed to produce random waves of very high frequency (in terahertz) that randomise the nature of microwaves, thus rendering radiation harmless in some inexplicable way. It beats me how these rubbery little things can generate an electronic signal such as a carrier wave. Even if they do, by some bizarre breakthrough, there is no evidence for the claim that these randomised microwaves will be any less harmful biologically.

You gave your speech, got a picture taken and left, leaving me to make sense of this assault on my scientific temperament. The inventor of the chip, Mr Ajay Poddar (ironically, another IITian) made a small demonstration of how the chip worked. He asked an old man to stand with his arms rigid and outstretched. He then tried to force down one of the old man’s hands with one of his own, which he couldn’t. Then he gave the old man a working mobile phone in the other hand and repeated the exercise. This time, Mr Poddar managed to push the old man’s hand down, leading him to conclude and exclaim that radiations from the phone interfered with the brain’s signals to the man’s arm muscles. He then put the rubber chip on the phone in the old man’s hand and tried again. This time, he couldn’t do it, concluding that the chip worked. I wondered what you would have made of this.

The author of the book is an energetic woman in her mature years. In her opening speech, she mentioned how her heart would jump into her mouth every time her granddaughter would pick up her iPad. I couldn’t help imagining a hyperactive jack-in-the-box heart lodged in her chest. You, on your part, complained that you have somehow developed a reputation of being anti-technology and anti-development.

Until next time, Siddhartha Gupta