Alleged internet misuse is enough, it would seem, to suspend a student from the university. And this is not the only campus facing a clampdown. 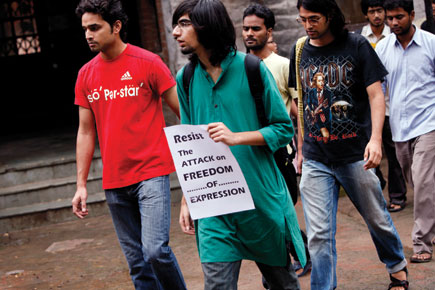 Alleged internet misuse is enough, it would seem, to suspend a student from universities. And this is not the only campus facing a clampdown.


In June this year, Mohammad Adil Hossain, 22, a final year student of mass communication at Aligarh Muslim University (AMU), was suspended and banned from campus. Among the reasons cited, there is this from the suspension order sent by the Office of the Proctor: ‘The above mentioned student further adamantly lowered and tarnished the image of the University by resorting to and misusing the Internet (AMU Network). Moreover, he is continuously making mis-statements, averments, and utterances without any plausible proof or credible evidence on the Internet on Yahoo! hosted website ‘TheAligarhForum@yahoogroups.com’ and ‘worldofaligs@yahoogroups.com’ and other AMU related websites regarding sending of the body of the deceased student [an electrocution death on campus], installation of CCTV cameras and sanctioning of money for their repair being pocketed by officials of the University.’

In response, Adil Hossain took AMU to court, challenging his suspension. On 1 September, the Allahabad High Court directed him to appeal to AMU’s Executive Council against the decision taken by its Disciplinary Committee.

Adil’s battle should concern us all. Especially this generation of students, for whom the internet has become so crucial to discovering, forging and evolving social and political identities. This is not just another suspension. It speaks of why the internet as a medium of student expression is being seen as such a serious threat to authority. On the net, all voices are equal, and it is precisely this freedom from power hierarchies it affords that needs to be defended—and fiercely too.

Says Adil, “At a time when China is being criticised by the entire world for internet censorship and putting activists behind bars for blogging and commenting on websites, at a time when people in countries like Iran have chosen the internet as a tool to discuss issues and grievances, the AMU administration is exhibiting a very medieval mindset.”

For some time now, AMU hasn’t been able to shake off the curse of bad press, be it for alleged financial irregularities, or mass student protests after a campus shutdown last October, or a recent controversy over an officially sanctioned local intelligence network, or the shoddy treatment meted out to the late Dr SR Siras after a shady sting operation caught him engaged in gay sex on campus with an outsider.

It is unlikely that the university’s reputation is going to be made or unmade by comments posted online by a student. But all the same, Adil has seen his right to freedom of speech and expression withdrawn. “Today, if I can be suspended for writing on two Yahoo groups,” he says, “in future students can be suspended for criticising the administration on Twitter, Facebook or Orkut.”

The university’s public relations officer Rahat Abrar first denies that such a charge was made against Adil, but quickly changes tack upon being quoted the suspension order: “He always maligned the university on the internet with wrong information and baseless rumours.” Keen to appear pro-internet, he also mentions how AMU students have been given wide access to this wonderful source of information.

As it turns out, Adil himself is something of an RTI (Right to Information) activist who has used the Act to expose some of the administration’s most controversial policies and decisions. Some of Adil’s online comments that scandalised the AMU administration are listed in a copy of the letter (obtained by an RTI filed by an AMU professor) sent from the proctor’s office to the vice-chancellor that led to the suspension. Here’s a sample: ‘He further maligned the university by again mixing [up the issue of] CCTV cameras with the availability of a well-equipped ambulance [an issue he took up after the student’s electrocution], and said, ‘Why does the administration think of (spending) crores for CCTV whose effectiveness is 3 per cent in reducing crime, as a Harvard academic paper states, but nothing like a lifeline ambulance or something advanced with all hi-tech medical facilities in it for injured students which would require much less than that and can save lives…?’’

There is a larger context to why the internet has become so central to student life on campuses such as AMU’s. “At present, there is no students’ union at AMU,” says Sajid Ahmad, a final year engineering student, “There is no platform other than the internet to express our views and raise our voices. This, I think, is the primary reason for the administration’s decision to rusticate Adil Hossain. They don’t want to let students express their views.” Campus goings-on are often discussed online, and Adil’s case is being seen as a stern signal from higher-ups: shut up, or else.

Students on campus are unhappy with this. And such frustration, it turns out, is not peculiar to AMU. Students at several other universities are also faced with attempts to cramp their democratic spaces. The systematic takeover of physical spaces on campuses has made students turn to the internet as a preferred forum  for discussion of public issues.

Just this week, students of Delhi University (DU), which thankfully holds  campus elections, ran a protest against the administration’s move to convert a student activity centre into an office of the dean of student welfare. Shewta Raj, a masters student at DU’s Hindu College, sees this as just another way to restrict free speech on campus. “This was the space where students staged plays, screened movies and held cultural programmes. Where are students supposed to go now? To do anything in the other public spaces, you need the administration’s  permission, and they are not exactly   keen to grant permission.”

Suffocated offline, students simply go online. In the internet, they have a powerful way to connect, network and organise themselves within and across campuses. Adil’s case, for example, has gone viral online—rallying students across India with common concerns about freedom. “What is happening here must be seen in the context of the suppression of student politics,” says Rajan Pandey, a PhD student at Jawaharlal Nehru Univer- sity (JNU) who is among those mobilising student support for Adil in Delhi, “For instance, the JNU student elections, which were considered model elections, were put on hold under the pretext that they don’t follow the Lyngdoh Com-mittee recommendations. Across campuses, depoliticisation is the agenda of the administration. In this scenario, the internet is a very crucial medium for expressing opinions. And anyone hellbent on crushing student dissent will surely try to police this space.”

Asmita Das, an MPhil student in Culture Studies at Hyderabad’s English and Foreign Languages University,  learnt of Adil’s campaign through a JNU student party blog. She knows the feeling: Asmita and four other girls were chargesheeted for taking part in a student protest on campus. And then forced to give a written apology to keep the administration from taking further action. “The internet is a boon for students across campuses in India,” says Asmita, “If we take the example of what happened at Jadavpur University (JU) in Calcutta, it was the sheer power of the internet that helped them keep the agitation on for such a long time. It is not just social networking sites, but also personal blogs that have redefined the very nature of the students’ movement in India.” She refers to a student protest against campus CCTV cameras that ended September 10 after a 52-hour gherao of university officials by students.

That protest in Kolkata also drew attention to Adil’s case and highlighted how his questioning of the installation of CCTV cameras at AMU led to his suspension (at least partly). “Today, most of us are connected to the internet,” says Sattwick Barman, a third year political science student at Jadavpur University, “And it has become an important tool to reach out to students. Slowly, in places like JNU, DU, AMU and Allahabad University, which have a history of student political movements, there is a growing tendency by the administration to clamp down on democratic spaces.”

THE POINT OF REFORMS

That politics is being chased off campuses is well known and widely documented, but  many see a bigger political design in all this. For some student activists,  the tide turned when universities began implementing the Lyngdoh Committee Report of 2006 on reforming student politics. James Lyngdoh, a former election commissioner, had led a six-member team (set up by the HRD Minis – try on the recommendation of the Supreme Court) to find ways of ridding campuses of money and muscle power. This had to be done, but you won’t hear students holding a brief for Lyngdoh. What you will hear is this: “We have three years’ experience of it (the implementation exercise) now—in many universities, it has only stalled student elections, ” says Rajan.

In a scenario where the HRD Ministry expects privatisation in higher education to usher in a telecom style  revolution, perhaps it’s pointless to expect tolerance for organised student dissent. Any day now, the AMU Executive Council will deliver its verdict on Adil Hossain’s suspension. Thanks to the internet, it will be a victory—or loss—for more than one student or just  one university.