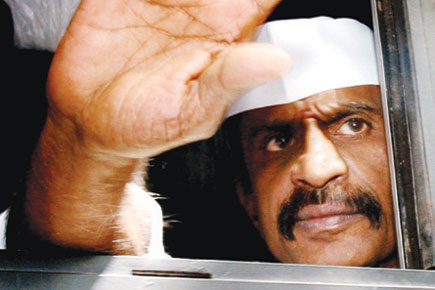 When under trial don Arun Gawli decided to contest the 13 October Maharashtra Assembly polls from the newly carved out Byculla constituency, Mumbai crime branch chief Rakesh Maria’s job just got tougher. Gawli is a sitting MLA from Chinchpokli (Byculla after delimitation). Another underworld don recently released from jail, Ashwin Naik (who has a history of enmity with Gawli), is keen to deliver the seat to the Shiv Sena. Not just that, 144 Tenements, the residence of Naik, and Dagdi Chawl, the home of Gawli, are close by. Presently Gawli is in jail in an extortion and murder case. Naik was acquitted some months ago of the murder of his wife Neeta, and is keen on re-establishing his hold over Byculla. There is also money involved in establishing supremacy in this constituency, which is home to many dilapidated buildings, all in queue for redevelopment into high rises. His daughter Geeta Gawli claims, “My father is not involved in any nefarious activities. The truth will come out. We have started our door-to-door campaign. My father will win. We are not scared.” Maria has reportedly formed a special team to monitor the two gangsters.

“The state unit president (of NCP) RR Patil advises me against attending more than six meetings (a day) for my advancing age. It gives me clear indications that I should retire and I am pondering over it seriously.” These words of Sharad Pawar may well be a tactical way to garner sympathy votes in the upcoming Maharashtra polls, but they also sum up the predicament being faced by the old guard of Indian politics.

With the chant of generational shift getting louder, most 70-plus politicians may indeed be playing their last innings in active politics. Most have not yet acknowledged it, though some have read the writing on the wall.

Days before Pawar’s public statement, Congress leader Sushil Kumar Shinde had made a similar wish. And now Swami Vishveshwara Teerth of Udupi’s Pejawar Muth has claimed that BJP leader LK Advani has expressed “his desire to distance himself from politics”. Besides these three, several other senior leaders including Prime Minister Manmohan Singh, Delhi Chief Minister Sheila Dikshit, Petroleum Minister Murli Deora and Mohsina Kidwai of Congress; Bhairon Singh Shekhawat of BJP; AB Bardhan of CPI, Kerala Chief Minister VS Achuthanandan of CPM and Tamil Nadu Chief Minister M Karunanidhi of DMK and Jaswant Singh are among those who are said to be playing their last innings.

Though not all, a good number of such leaders have played their cards well in the autumn of their political career, having successfully promoted their children to occupy the places that would be vacated after they pack up and leave the political centrestage.

Shinde’s daughter Praniti Shinde is contesting from the prestigious Central City Assembly seat in Mumbai while Pawar’s daughter Supriya Sule is comfortably placed in the Lok Sabha. Sheila Dikshit’s son Sandeep Dikshit and Murli Deora’s son Milind Deora are also Lok Sabha members. Although Jaswant Singh’s son Manvendra Singh lost his Barmer Lok Sabha seat to the Congress in the April-May election he is already in a position to take care of the political niche carved out by his father. Karunanidhi’s bid to position his sons and daughters is only too well known.

For all these leaders, if the young brigade has to rise, it must happen under the leadership of their own offspring.

Amar Singh has a problem. He does not know how to get back the clout he had over the Samajwadi Party (SP) before he left for Singapore, where he had a kidney transplant on 10 July. Party President Mulayam Singh Yadav’s clan, which Singh had kept under leash via his proximity to the SP chief, has gained enough control over the party and its decision-making, they add. Singh’s uneasiness with the SP leadership showed within days after he returned to India on 20 September. “The media was right in criticising my party chief Mulayam Singh Yadav for admitting (taking the support of) goons like Mukhtar Ansari, who later joined BSP,” Singh told reporters on 23 September. Though later Singh attacked the media for misquoting him, sources say things have not improved for him within the SP.

India has done it again. In a major concession to richer countries before the Copenhagen negotiations on climate change, it has volunteered to provide the United Nations an annual report on the country’s greenhouse gas emissions inventory and measures to reduce these emissions. Under the Kyoto Protocol that ends in 2012, only the richer countries have to submit annual reports to the United Nations Framework Convention on Climate Change.

Consider this: with one-sixth of the world’s population, India accounts for less than 5 per cent of global emissions. Richer countries, by contrast, account for over half the global emissions.

Minister of State for Environment and Forests, Jairam Ramesh, who made this offer to the UN at a summit on climate change in New York last week, has rushed to clarify that India can balance both domestic concerns and transparency to the international community. But, experts believe that the offer will only increase international pressures on India, and as a result, undermine the country’s position.

In the days that have followed the offer, the minister has clarified that the attitude of the developed world should not decide what India does domestically to control emissions. The Government’s assessment is that we are extremely vulnerable to climate change and our response back home cannot be ‘Copenhagen-dependent’.

Of course, these are valid arguments and none can deny India needs to do a lot domestically. But to tackle emissions at home, we don’t need to change our international stance either.

The Americans are ruthless and hard bargainers. The US Congress has refused to accept its mitigation obligations unless India accepts them. “The developed nations that caused much of the damage to our climate over the last century still have a responsibility to lead,” US President Barack Obama said at the UN Climate Change Summit. They inflicted the most damage and now want to dictate terms.

Ramesh must reiterate to the US-led group of developed nations what he told US Secretary of State Hillary Clinton on her visit to India: “India’s position is clear and categorical that we are simply not in a position to take any legally binding emission reductions.”

We need to tackle the problem back home but hold the developed nations to their international commitments and that certainly won’t happen by volunteering concessions in their favour.

The Centre wants Kashmiri Pandits to return to the Valley. But can it guarantee their safety? Things are once again moving forward in Kashmir. If all goes well, there will soon be talks between New Delhi and the separatists, and Prime Minister Manmohan Singh could be in the Valley as early as next month. In between offerings of peace and dialogue, someone has thought about Kashmiri Pandits as well. Driven out of their homes in 1989-90, hundreds of thousands of Pandits have been living in exile all across India for two decades. Now the Centre wants them to go back to Kashmir. According to the authorities in Jammu, where most of the migrant families reside, 1,600 Pandit families have expressed their desire to return.

On its part, the Government has offered money and jobs to those who want to return. Some separatist leaders, including the hardliner Syed Ali Shah Geelani, have also issued statements that the Pandits are welcome to come back. This is indeed a positive step. The Pandits must return, but is the Centre in a position to ensure their safety? For terrorists, the residual Pandit families who chose to stay back after the community’s exodus have always been a soft target. The Government and even the separatist leaders cannot ensure that massacres like Sangrampora and Wandhama (where men, women and children belonging to the Pandit community were massacred) don’t happen again.

In the absence of such guarantees, the Pandit families who choose to return may end up in designated camps which are like mini cantonments. In which case, the sheer effort of taking them back might be defeated.