Restoring Lost Order in the Courts; How Deep is Your Prejudice? 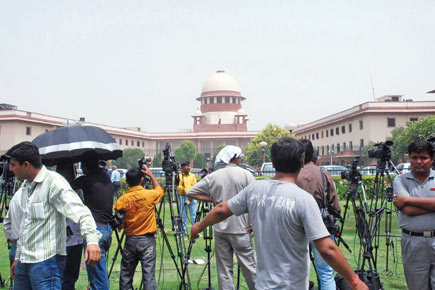 Restoring Lost Order in the Courts; How Deep is Your Prejudice?


Restoring Lost Order in the Courts

Is the Judiciary heading towards a clean-up? Going by the words of the new Chief Justice of India, SH Kapadia, one would think so. To begin with, Justice Kapadia would like judges to go easy on judicial activism.

Delivering the valedictory address at the national consultation on second-generation reforms in legal education, Justice Kapadia, who will formally take over on 12 May, quoted a British judge to drive home his point: “Judicial activism beyond a point is against the rule of law…” and “that is why I always tell my brother judges, ‘please see to it we also should continue to learn’.” Coming at a time when judicial overreach is generating intense public debate, these views should be welcome.

“When we talk of ethics, the judges normally comment upon ethics among politicians, students and professors and others. But I would say that for a judge too, ethics, not only constitutional morality but even ethical morality, should be the base,” he said at the consultation. “If the judge is clear on concepts… he will be able to decipher the difference between judicial activism and judicial restraint,” he said.

Of late, courts have often been questioned for attempting to make new laws in the process of interpreting existing laws.

In December 2007, a two-judge bench of the Supreme Court slammed judicial activism. The bench, comprising Justices AK Mathur and Markandey Katju, had told the Judiciary, including the Supreme Court and the high courts, not to overstep their limitations, nor try to run the Government. And if the Judiciary continued to encroach the domain of the other organs of the State, then Indian politicians may react by curtailing their power, the bench observed.

This time, though, coming from the Chief Justice even before he starts his term, the words of caution set the agenda for what is likely to follow. Law Minister M Veerappa Moily said at the consultation that the legal system now requires a major surgery rather than medication to put it on track. Moily said he expects “dramatic changes” under Justice Kapadia. It was Moily who had in August 2009 brought in a controversial Bill to the Rajya Sabha exempting judges from making a public declaration of their assets. But with the Government, too, backing the CJI’s desire for reform this time, things might just change for the better.

How Deep is Your Prejudice?

You wouldn’t expect a 23-year-old girl, who’s a graduate from Delhi’s Indian Institute of Mass Communication (IIMC) and a journalist working with a leading business newspaper, to die in an apparent case of honour killing. But that is what seems to have happened to Nirupama Pathak. If we thought Khap panchayats only existed in the boondocks of Haryana and Western UP, Pathak’s murder, allegedly by her family,  is a stark reminder of how deep the caste divide runs in Indian society.

Pathak was in love with her batchmate from IIMC, Priyabhanshu Ranjan, who is from a different caste. Pathak’s family opposed their relationship, and her father, in a letter, had made it clear to her that he considered the ancient Hindu tradition that bars an ‘upper-caste’ girl from marrying a ‘lower caste’ boy superior to the Constitution.

Pathak was allegedly called to her native place in Jharkhand and found dead later. An autopsy confirmed that she was pregnant, which led to suspicions of her death being an honour killing.

Pathak’s case is not an isolated one as the National Commission for Women has now realised. The body now plans to move the Centre to legislate on the ‘right to marry’ any person, irrespective of caste or religion. Legislation is fine, but the Government also needs to make sure that the perpetrators of such crimes don’t go unpunished. Often the political leadership takes a soft stance on such killings due to electoral considerations. Unless that approach is done away with, legislation won’t make a difference.