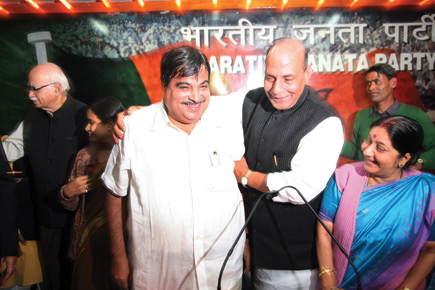 After a series of electoral defeats, the Bharatiya Janata Party (BJP) tried to put up a brave face with its new President Nitin Gadkari replacing Rajnath Singh last week and Advani making way for Sushma Swaraj as Leader of the Opposition in the Lok Sabha. The top leadership, led by LK Advani, went to great lengths to explain how the Rashtriya Swayamsevak Sangh (RSS) imposed Gadkari is neither unwelcome, nor a nobody. “The NDA Government gave various connectivities. The most memorable among those is highway connectivity because we thought infrastructure is most important,” Advani said shortly after feeding Gadkari a laddoo. “Gadkari is an expert on infrastructure,” the grand old man of BJP told TV crews and the assembled media while drawing a tenuous link to prove Gadkari’s national credentials. Each of the BJP leaders who let the RSS’s writ prevail over their ambitions dubbed a new leadership as the party’s new hope. Gadkari himself vowed to work hard and “not do anything that puts the party or any worker to shame”. Gadkari, who has anyway never won an election himself, has also vowed not to contest any polls during his tenure as BJP president.

But, a party’s strength is obviously measured in terms of its electoral wins. Barely had the euphoria of a new beginning started than electoral reality struck. By mid-week, with the Jharkhand Assembly results out, the BJP’s hopes of sweeping Jharkhand had been dashed.

“We are prepared to sit in the opposition if the need arises,” says Arjun Munda, the party’s face in Jharkhand. The party along with its alliance partner, the Janata Dal (United) had bagged 36 seats in the last Assembly election. This time, it was hoping to come to power in the state and tom-tom the victory as a part of the BJP’s revival story. On the other hand, the Congress—the BJP’s main rival—has only gained in the state and so has the newly formed Jharkhand Vikas Morcha (JVM). Ironically, the BJP chose to back Munda in his rivalry with Babulal Marandi who left the party and formed the JVM which is now largely responsible for the BJP’s losses. The Jharkhand results are another indication that in electoral battles the losses of the BJP and its allies are translating into gains for the Congress and its allies. Despite a new leadership at the helm, the BJP’s revival story will have to wait.

In what is being seen as a major setback to the Nagpur police, a fast-track court has acquitted four alleged Maoist leaders in the Deekshabhoomi conspiracy case. The four include Arun Thomas Ferreira and Murli, alias K Ashok Reddy, who were arrested by the police in May 2007 on charges of conspiring to blow up the Deekshabhoomi memorial—a site where Dr  Ambedkar had converted to Buddhism. The court acquitted them since the police could not furnish any evidence to show that the four were a part of the CPI (Maoist).  But even after the acquittal, the four will continue to be in jail due to pending trials in other cases against them in the Chandrapur and Gondia districts of Maharashtra. “This imprisonment is not based on their actual involvement in the respective crimes; it is just a method for their political and ideological persecution,” said their lawyer Anil Kale.

In a Fix Over Telangana

Former Andhra Pradesh Chief Minister N Chandrababu Naidu is in silent mode these days after the Centre’s decision to carve out Telangana.  While his party MLAs from Telangana threaten to resign and form a TDP Telangana unit, his MLAs from the rest of Andhra are harping on a samaikhya (united) stand. As many as 39 of the TDP’s legislators  are from Telangana while over 50 are from the coastal and Rayalseema regions, where anti-Telangana protests have disrupted normal life for a fortnight now. Though the TDP has officially announced it will support the Telangana resolution in the Assembly, Naidu’s silence is baffling. TDP went to the Assembly polls this year by aligning with the Telangana Rashtra Samithi and CPI.

Naidu’s dilemma is understandable as he had never really supported Telangana and used it only as a poll issue to strengthen his party prospects. But sources close to Naidu say he feels it is UPA President Sonia Gandhi and AP Chief Minister K Rosaiah who should be blamed for it.

Where Democracy Is through Diktat

In the controversy over the Gujarat government’s move to make voting compulsory in elections to local bodies, the recent past has been ignored. This same government has been providing monetary incentives to discourage electorates from exercising their right to vote in Panchayat elections in the state. Samaras Yojana—as this “contribution” to democracy is referred to in Gujarat—encourages the process of nomination, instead of election, for sending representatives to Panchayats through consensus. The pretext is that this creates a positive environment for development in villages. Under this scheme, financial and other developmental incentives are given by the state government to villages which elect their entire Panchayat body unanimously—that is without getting into messy elections.

In reality, however, the Samaras Yojana, far from ushering in peace and development in the villages, has wreaked havoc at the lowest tier of Indian democracy. There are innumerable instances of villages arriving at consensus without the participation of marginalised voters. There are also cases of ‘auction’ of Panchayat posts to the highest bidders as well as dominant sections in villages forcing deserving candidates to opt out of elections. In fact, it’s no longer a secret that Samras Yojana has turned out to be a strategy to ensure that a good number of Panchayats remain in the hands of people owing allegiance to the Sangh Parivar. Is the real motive behind this latest move a fear that fatigue has started setting in and their core voters might just not turn up to vote?

Whatever the truth, it remains a fact that in its own way each of these initiatives is fundamentally undemocratic. This is quite obvious where the Samaras Yojana is concerned, and it is a surprise that this initiative has been allowed to survive for so long.

The new move at the level of local bodies is just as flawed.  It goes against sane democratic norms to force a citizen to vote when democracy, by its very definition, is based on free will. If the Gujarat government wants a high turnout of voters, it is the responsibility of every party to mobilise the electorate. If a voter believes that it is not worth his or her while, or trusts the decisions other voters will make, then so be it.

Union Home Minister P Chidambaram thinks that his ministry needs to be restructured. Calling for a new format to deal with terrorism, he said, “Those issues with no connection with terror…  would not be with the Home Minister. The Home Ministry should devote time only to internal security.”

He is right. It’s high time that the Indian security apparatus takes another look at the way in which it has been handling issues of terror.

To begin with, it could take up the case of Hemant Karkare’s missing bullet proof jacket. It went missing right after the chief of Mumbai Police’s Anti Terrorism Squad (ATS) was killed in gunfire during the initial hours of the Mumbai siege in November 2008. It was after his wife filed an RTI application that the police accepted that it was lost. But now, a sweeper has come forward and said that he had actually put the jacket in a garbage disposal bag a day after Karkare’s death. This has been met with disbelief by many including Karkare’s wife who believes that this came up because the government is under pressure.

Even if one is to believe this theory, that the jacket was dumped in  a garbage bin a day after the ATS chief’s death itself raises serious questions on the investigative abilities of our agencies. If we have to begin—or restructure, as Chidambaram says—perhaps we need to begin with this jacket itself.