In Pursuit of the Hip in Patna

There is a Patna that is emerging with all the splendour and comedy of urban modernity. 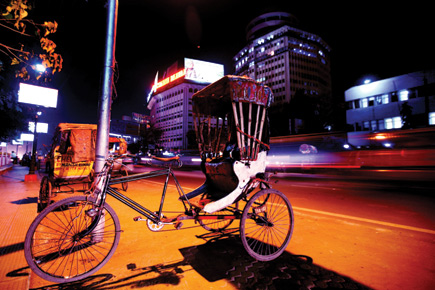 There is a Patna that is emerging with all the splendour and comedy of urban modernity.


Searching for the classy in Patna is like searching for Osama in Pakistan. You have enough evidence to build a case, yet evidence is all you have.

Patna is a city without malls, multiplexes, or even a Barista. Many parts look like slums. In the ladies’ restroom of Patna airport, it is a fat lady who doles out the toilet paper and not the automatic paper towel dispenser. But there are also Gucci bags, Baskin Robbins, and facials for Rs 1,500. Fit guys in Aviators, snug Tees and jeans hang longingly in Patna’s hip joints, waiting to be checked out. After decades of pretending, wealth is now being flaunted in the open. In 2005, after Lalu fell, a branded lawlessness almost came to an end. The elite, used to living undercover, began crawling out of the woodwork. Mercedes cars are still too ostentatious for Patna roads. SUVs with personal bodyguards still make the ultimate social statement. But there is also the unmistakable arrival of urban modernity.

Thirty-one-year-old Priya Lal has seen the city grow brand conscious in the last three or four years. Almost every day, the Patna edition of The Times of India has a ‘more & more’ story, like how more and more women are storming male bastions, etcetera. Priya is one such woman the newspaper writes about: highly educated, teaching biotechnology at the university, driving her daughter around when the driver skips, making Chinese food at home because her husband loves it, living in a new apartment instead of an ancestral bungalow.

Priya is part of the elite crowd who notice the bag, watch or sunglasses. “I have seen eyes roll at Gucci, Louis Vuitton, Chopard here,” she says. Although international brands like Levi’s, Nike and BlackBerry are available here, Priya and her friends must travel to a metro with an empty bag to get their fill. Delhi is increasingly becoming Patna’s favoured metro over Kolkata. Three upcoming malls promise to make shopping easier. The P&M mall, scheduled to open in August, will have Satya Paul, Gitanjali jewellery and W, a female clothing line. Till then, the vacuum is exploited by street-smart boutiques stocking everything from Chambor lipsticks to Biba clothing.

Priya has also seen Patna buzzing at 4 am on New Year’s Eve, a seismic shift from Patna of the past. A decade ago, even a non-alcoholic disco (Pandora’s Box), open only in the day, was forced to close down within a few months due to the law and order havoc it created. Today, Priya’s tight-knit, cosy friends’ circle is in the habit of throwing parties on Valentine’s Day, Friendship Day, Christmas, birthdays and anniversaries. She herself enjoys theme parties. Along with a party planner who can charge anything up to Rs 15,000, Priya has had Hannah Montana-, Barbie- and Rapunzel-themed parties for her daughter in the past, and looks forward to hosting her husband’s 40th birthday bash. Wives tend to go over the top on the occasion, organising farmhouse-themed parties complete with horses and stables, or even a surprise party on an exclusive island in the middle of the river Ganga.

“Earlier, they didn’t want to show they had money. Now they’re flaunting it,” says Ananjay Bhushan, owner of Patna’s first art gallery. When the gallery opened in 2003, he had to stock handicrafts and artefacts to make the space viable. Since then, local buyers have grown. People in Patna now do consider expensive and sophisticated propositions like art. “The fear has gone,” he says. In the past, the city would fall dead by 8 pm. Ananjay now sees families roaming outside his gallery’s glass doors beyond nine. While an outsider notices a dozen men pissing unabashedly on the street, Ananjay notices new toilets being constructed.

At the moment, all investments and aspirations are on hold, as Patna waits with bated breath for the state election to be held later this year. While many are afraid of losing their newfound freedom, for Ananjay there is no turning back. He believes change is an unstoppable, irreversible force.

Every year he co-curates an exhibition of Bihari artists with Subodh Gupta in an Indian metro. This year, he hopes to do the opposite. He wants to display in Patna the Bihari artists who have moved out, like Sanjay Kumar, Rajesh Ram and Subodh Gupta, of course. Subodh Gupta, one of India’s highest-paid artists, is an alumnus of the prestigious Patna Art’s College.

Among Ananjay’s patrons is Aditya Jalan, whose drawing room is a private museum, one of the biggest in the country. It houses the acquisitions of Aditya’s great grandfather, who travelled the world and brought back Napoleon III’s bed and Marie Antoinette’s plates to keep aside Tipu Sultan’s palanquin, Birbal’s plates and carefully crafted Persian and Oriental rugs. When Jawaharlal Nehru visited his home, Qila House in 1940, he wrote in a letter to Indira that he was ‘surprised to find a Marwari businessman developing into an art collector’. Seventy years later, visitors are still surprised. Few associate Patna with the culturally rich and sophisticated city it used to be—the Patna that Zakir Hussain was nervous to perform in as even a rickshaw-wallah could point out his mistakes.

As COO of Idea Telecom, Bihar and Jharkhand, it is part of MD Prasad’s job to profile consumers. “There’s nothing short of affluence here, be it by relative or national yardsticks. All lifestyle-indicating goods or brands are present here. But people don’t show their wealth.” To him, Bihar isn’t a punishment posting, but an opportunity. “Yes, it is one of the poorest states in India, but there is an equal number of people deprived of good brands, services and lifestyle goods.”

When Ashutosh Singh brought Baskin Robbins to Patna, way back in 2000, during Lalu’s regime, friends laughed at the thought of selling ice cream at Rs 31 a scoop. But, as Ashutosh puts it, he has no complaints. His outlets and business have increased, and he now sells a scoop at Rs 53. “I always had a clientele. Back then it was via home delivery, as they didn’t want to be seen. I’d get orders from private parties. Post 2005, people stepped out.” A public school product like most of Patna’s elite, Ashutosh chose to live in Patna as he prefers being a big fish in a small pond. Bihar gives an entrepreneur the chance to grow with the market. Since 2000, Patna has transformed itself from a vanilla-chocolate-strawberry crowd into a mousse- and Bavarian chocolate-loving city.

The Patna male today is conscious of the way he looks. Chandan Sparsh, a six-month old spa, receives calls from many eager men who are disappointed to hear that the place isn’t unisex, and that there are no female masseuses involved. But that doesn’t stop them from coming. The decision to cater to men too was one of the best decisions the owner Sneha Singh made. After the wedding season, the spa’s second highest revenue on a single day was during Chhath Pooja. While the women were busy fasting, the men wanted to relax with a massage.

Sneha Singh’s family isn’t new to bringing franchises to Patna, discovering unpredictable consumer behaviour in the bargain. A year ago, it brought Tata Motors to Bihar. “When we started, we expected the Nano to be our most popular sell. It turned out to be the Tata Safari. Right now, the Manza’s rocking,” she says.

Civic activism, too, is growing. The Husseins, a retired couple, make unlikely activists in this city of political clowns. After a lifetime of working with the UN in Geneva, they decided to return to their hometown for a few months. Asiya Hussein takes advantage of her white hair in a society where age demands respect. “I’m as old as your mother” is how she begins her talks with rude shopkeepers and littering ladies. They created the Bank Road Citizens Forum to eliminate the borderless garbage dump their locality had become. “What is the difference between you and a dog?” she yells at a man urinating on her compound wall.

When a city transforms, some of its virtues go too. But Patna’s cultured have remained so. You can walk into most offices and homes, expecting to be entertained with ‘hum-aap’ conversations and excessively sweet tea. “They have time for you. And there is kindness,” says Mrs Hussein, the grandmother activist.

Patna is still a small town at heart. People still hire on goodwill. At Chandan Sparsh, Sneha Singh grills a potential employee. Dressed in a salwar kameez and plaited hair, the girl is nervous in this English-speaking corporate environment, and gets all her answers wrong. On seeing her tears, Sneha’s tone changes. She begins talking about all the things she must learn on the job. It seems the girl is hired.

The locals immediately warm up to you once they find out you’re here to interview them, and not politicians. But there’s something left unspoken, unsettled in most conversations here. It could be the uncertainty of the polls. “Give the city two more years,” says Aditya Jalan, “Do the same story then and mark the difference.”