In Pursuit of the Girl Child 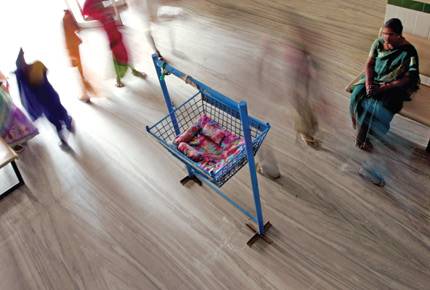 
The journey of abandoned girl babies from Andhra Pradesh’s Telangana region to state-run homes turns out to have an unlikely guardian. In 2007, the state government introduced the Cradle and Bell Scheme in regions with a high prevalence of female infanticide. The scheme is now a success. But has this good samaritan idea made it far too easy for families to give up the girl child? A little background: an adoption racket busted in the state in the early 2000s stopped private agencies from facilitating adoptions, giving the State sole authority. What follows is a trail of discoveries made before knocking on government doors for some answers

In all, eight baby girls—all of them abandoned at the government’s doorstep by their parents from different parts of Nalgonda district, infamous for its record of female infanticide.

This is the most visible consequence of the much reported ‘Cradle and Bell Scheme’ recently introduced by the Women Development and Child Welfare Department of the Andhra Pradesh Government. But that number reveals only part of the success of what has become a welcome new practice among the Lambada tribes at whom this government scheme seems primarily targeted. In all, 58 babies have been given up to the government from Nalgonda district, since August last year. Since the shishu greha has limited capacity, the remaining babies are sent to the state shishu greha in Hyderabad.

The scheme has been introduced in three neighbouring districts of Nalgonda (58 abandoned), Rangareddy (43), and Mahaboobnagar (7).

In all, 108 is how many babies parents gave up to the government, encouraged by the Cradle and Bell scheme, first introduced in Tandur in Rangareddy district in November 2007.

The project in Devarkonda mandal (every district is divided into mandals) in Nalgonda district ranks No 1 in babies abandoned. A staggering 41 babies in 12 months.

Padmamma, a volunteer, sits by the cradle installed at the government hospital, waiting for couples to come with their baby girls to leave behind. The cradle was introduced in August last year. She sits here every day from 9.30 am to 2 pm. Another volunteer covers the afternoon shift. Since Padmamma started volunteering in April, 15 babies—all girls, she says—have been brought in by parents. “I counsel the parents and try to convince them to look after their girl baby. Some of them take the baby back. Others say they already have three girls at home and cannot look after another one. They want a boy child.”

The parents, most often, belong to the Lambada tribal community. They are usually daily wage labourers earning about Rs 50-70 a day (Rs 100 if it is a National Rural Employment Guarantee scheme job), she says.

Toorpa Katta Komma is a tribal hamlet in Devarkonda. The first house is Suvi’s. She has five children (four of them girls), and she is expecting her sixth child, after Revathy (9 years), Renuka (8), Kasturi (6), Rajesh (5), Rupa (2). Suvi’s predicament is typical of the women in her community.

The government’s family planning programme doesn’t seem to have made inroads into hamlets such as these. The Girl Child Protection Scheme which entitles families with a single girl child to Rs 1 lakh when the girl turns 20, among other benefits, doesn’t seem to be working here, going by the recorded incidence of girl children abandoned at orphanages in the last one year since the cradle scheme was introduced.

Rupa, Suvi’s youngest, is now two. She was sold for Rs 1,000 to a childless couple at the hospital where she was born, before the police followed up a media report and recovered the child.

Suvi and her husband live on daily wages. Her husband, she says, has a drinking problem. Badly timed rains has meant that their one acre of land, and the two acres that they have leased, have brought them no yield. They survive on the rations that come from the public distribution system. What happens if the baby Suvi is expecting is a girl? The family will risk everything for the birth of a male child. A local newspaper report from last year highlights the plight of a woman from the nearby Chandampet Mandal who has mothered 12 children. All of them girls.

In this hamlet too, there are cases of serial mothers. Jamku, an agricultural labourer, has six girls and four boys. She says her fear of operations kept her from going in for family planning sooner.

The Cradle and Bell Scheme is termed so because the cradle has a bell attached, which is supposed to be rung every time a baby is abandoned. So clearly, the giving away of the baby girl is not meant to be a surreptitious act. It has public sanction. But isn’t it better than the killing of innocent infants, the government will ask.

So well has the scheme caught on that the cradle now has become unnecessary. The family directly gets in touch with the local government staff to come and collect the girl child from their home when she is born.

The success of the scheme even got the attention of Rajasthan’s principal secretary, who came calling to this remote hamlet called Pedda Thupra in Rangareddy district.

“The anganwadi staff here are very good. They inform us immediately when a girl child is born. We spoke to the Mandal Parishad Territorial Constituency (MPTC) leader. We reasoned with him, why kill girl babies? The government officer from the department will accept the babies and make them available for adoption.”

“For about six months after the cradle was introduced, the people of the village remained distrustful of us. Slowly, we won their trust. Parents would follow the baby to the shishu greha to find out where we were taking them. Once convinced, they began to come forward to give us their babies,” said Venkat Laxmi, child development project officer, Ranjendranagar Mandal.

The register at the anganwadi centre has a record of 12 babies (11 girls, one boy) given up since October last year. From the entire project area, which includes two mandals, 27 babies (23 girls and 4 boys) were taken to the shishu greha.

The mothers leave their baby girls against their will, says Venkat Laxmi. They are forced to do it by their husbands who refuse to keep the girl child and threaten to kill her, she adds. The average size of the family here, she says, is five to six.

Sharada has two daughters—Sarita (6) and Suneeta (2). She gave away her third daughter at birth, four months ago, to the anganwadi. Sharada is an agricultural labourer. Her husband, Santhosh, is an auto driver. He says he wants to try for a son one last time.

“I have nothing. I have no land. What would I do with a third daughter? So that is why I gave it away to the anganwadi.”

Dowry here is paid in lakhs. Two, three and five lakh rupees are the amounts being discussed. Most of them are daily wage labourers earning between Rs 60-70 a day. How can they afford it?

“That’s why we give away baby girls. Madam says why kill the baby. Give it to us, we will look after the baby,” say Leela, a mother of four. Two boys and two girls. “Now, girl babies are not being killed,” she says.

Chandramma, mother of three girls, says girls here are married at the age of 12. But then, she changes her statement, saying, “We don’t marry them off at such an early age nowadays.”

Sharada and Santhosh say they will have to spend at least Rs 1.5 lakh for their daughters’ weddings. Expenses will include gold, clothes, a bed, an almirah, vessels and cash.

Maru was the first one in this hamlet to give her baby to the anganwadi. She has mothered eight children so far. Four of them (all girls) died. A year ago, she gave birth to triplets. Two died, the third she left in the cradle. Now she has four children—Kavitha (11), Sangeetha (8), Maheswari (7) and Pavan Kumar (4). Her husband is a lorry driver who earns Rs 3,000 a month. They depend on the Public Distribution System for food.

Six months ago, she accompanied another lady from the village who wanted to leave her child in the shishu greha in Hyderabad. “Since I was there, I asked to see my child. But they said the baby was given away to Bombay. I didn’t ask them anything more. I came back.”

Sita is a local informer who knows when a girl child is born in the hamlet. She immediately passes on the information to the anganwadi staff. “The men don’t allow their women to do the family planning surgery until she bears a boy child,” she says. Sita usually accompanies the mother and the anganwadi teacher to the shishu greha in Hyderabad. “Parents are given two months before which they can reclaim their child. While leaving the child, parents sign a paper,” she says. The declaration shields the government from any legal complications of detaining children against parents’ wishes.

“If parents are consenting, the child can be directly taken to a shishu greha. If the child is abandoned in the cradle, the parents’ whereabouts remain anonymous. Later, the parents may even lodge a missing child or kidnap case. So an FIR has to be lodged before the child can be transferred. It’s a long procedure. It’s a lot simpler if the parents come forward and everything is done openly,” explains the husband of a local anganwadi staffer.

As we enter Aruna’s house, her mother-in-law washing vessels outside says, “If it is a girl, it is yours. If it is a boy, we’ll keep it. What can we do with another girl baby?” Aruna is expecting her fourth child, she has three daughters: Sirisha (10), Maunika (4) Trisha (3).

Clearly, this scheme is a hit. Everybody knows what is to be done when a girl child is born.