“I met Raja today. He is a happy man”

“Yeah, I met Raja today. He is a happy man. The Chief Justice has given his clearance on him and he’s happy” —NIIRA RADIA “Does he know that the other guy is gunning for him?” —RATAN TATA 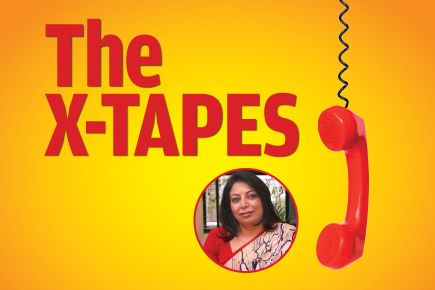 The proximity that gives Niira Radia her power.


The proximity that gives Niira Radia her power.

“Yeah, I met Raja today. He is a happy man. The Chief Justice has given his clearance on him and he’s happy” —NIIRA RADIA

“Does he know that the other guy is gunning for him?” —RATAN TATA

RADIA: Hi. You’ve got the media chasing me on Mr Tata being approached for becoming the chairman of the international advisory committee for Air India?

TATA: It’s true. Nothing has happened. He did come to see me.

TATA: No, no, the current CEO.

RADIA: Completely. He’s been brought in to safeguard the Boeing deal.

RADIA: So they put out a story saying that, you know, they’re trying to build credibility right now. I got a call from Times of India saying that Mr Tata has been approached. I said I have no comment to make.

TATA:  Yeah, I think that’s what you should keep saying till we hear anything.

RADIA: They are going to run the story in any case because Praful has gone on record to say that you’ve been approached.

TATA: Let him go on record.

TATA:  No I’m sitting on the ground in Tel Aviv.

TATA: The plane is two hours late. We’re all in the plane.

TATA:  But I think that’s in London.

TATA: You know how much I love those.

RADIA: Oh, you should have invited me. I could have worn my black gown. (Both chuckle)

TATA: You could have worn your black gown and gone in my place. I hate black tie affairs.

RADIA: I never get a chance to wear my black gown, Ratan.

TATA: We’ll make some occasion for you in Bombay.

RADIA:  Yeah, because I have got this Roberto Cavalli gown, which I never get a chance to wear.

RADIA: I have this Roberto Cavalli gown which I never get a chance to…

TATA: Is it in Bombay or London?

RADIA: No, I’ve got it lying, you know, with me in Delhi, so I can go wherever with it, but I never get a chance to wear it.

TATA: Well then, you wear it when you meet Hillary Clinton or or whom could I suggest who would be a befitting person to…

RADIA: (laughs) No. I’ll wear it when you next wear a black tie, or… you call me.

RADIA: By the way, AT&T has cancelled their interaction with Anil Ambani.

RADIA: What happened, Mukesh sent used his US lawyer to send them a letter saying that we have an ROFR [right of first refusal] in place, and they wrote back saying they were examining this and the matter is too complicated, and they have no intention of going forward. Given that it could just not end anywhere. Thank God for that. So now he is talking about China Power for his power company. Yeah, he has to raise money.

TATA:  I doubt that China Power would like to go into that transaction because they are so conservative.

RADIA: Hmmmm. He’s offering them 10 per cent only. There the ROFR is not going to matter.

TATA:  They wanted control and so on and so forth, right?

TATA:  I can find out but I don’t want to be unduly interested.

RADIA:  But he’s got now. In the telecom space France Telecom has said no to him. AT&T has said no. MTN has said no. I think is it Telstra?

RADIA:  They said no. So there’s nobody unless [and] until he is going to talk to QTel… is in trouble because they are looking at restructuring.

TATA: You have talked to Siva?

RADIA:  Yeah, Siva’s gone to court, you know, and opposed that 25th date.

TATA:  You told me that.

RADIA:  Yeah, so now what Raja told me was that he was going to give him licence without spectrum.

RADIA: So they are filing an application.

TATA: Go to court again and say that he didn’t get spectrum.

RADIA:  Yes, but there is no spectrum available and that’s what they’ve submitted. I know that unless the court can order release of spectrum from Defence and all of us benefit. It’s not going to happen, you know, until… you know, that’s not going to happen. Yeah, I met Raja today. I went to see him today and he is alright. He is a happy man. The Chief Justice has given his clearance on him and he’s happy. He’s really happy with that. I told him the letter’s coming to you… that KK’s letter, you know. But he couldn’t understand why is it a letter and why can’t I bring the cheque to him. I said ‘I can’t do that because there is a process to it and you have to understand.’  Raja is like, you know, he is always all over the place.

TATA:  Does he know that the other guy is gunning for him?

RADIA: Yeah. He is fully aware. He told me he said he needs help in the media. So I promised him I’ll help him. I’m helping him Ratan wherever I can, but the thing is that every time you try and help him, he goes and makes stupid statements, you know.

RADIA: So you don’t know what to do with him, you know. I told him just learn to keep quiet and keep his head down. As far as the media is concerned, he can’t resist talking to the media, and then he just says everything, you know. He is saying. The latest rumour is that he and Kanimozhi are having an affair which is actually not true.

RADIA: His latest thing is that he and Kanimozhi are having an affair.

RADIA: The latest rumour in Delhi.

RADIA: That Raja and Kanimozhi are having an affair, which is not true.

TATA: Yeah, but spread by who?

RADIA:  By whom else, Maran, but that’s because Raja, whenever the media comes to meet him or anybody comes to meet him, he keeps on telling them how much of a soft corner he has for Kani, and every time he talks about her, as dark as he is, he still blushes.

RADIA: He gives away the sign that he probably has a crush on her and she has got zero interest in him. Everybody then puts two and two together and gossips. You have this really weird man and he can’t understand why his wife is going to beat him up.

RADIA: He’s telling me today, ‘What do I do with all of these people, to all these rumours?’ And I told him, ‘Don’t talk to people about you have this soft corner for Kanimozhi,’ and that ‘You have to protect her.’ And I said to him, ‘You know, you actually blush.’ He said, ‘You can’t make out I am blushing.’ I said, ‘I’m sorry, but look at your eyes.’ Anyway, he can’t hide the fact that he’s got a crush on her. And Kani says to me, ‘God help me Niira, keep me away from this man.’ It is quite funny.  On the lighter side of Delhi. But then for the madness that I hate being here. So these are the lighter moments of life. I’m back in Bombay from Friday.

TATA: Okay, so we’ll get together.

RADIA: Yeah, I’m going to be there the whole of next week. You take care. Are you going off from London tomorrow, then you’re travelling to the US? You’re coming back. Okay, I don’t know why…

RADIA: Okay, so I’m back in Bombay on Friday.