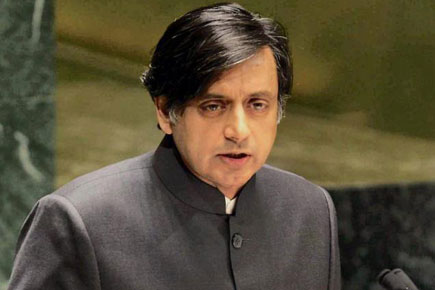 
Shashi Tharoor has an old connection with Kashmir. His first wife, Tilotamma Mukherji, is half-Kashmiri. His current wife, Sunanda, is also from Kashmir. In the past, Tharoor has mentioned in various forums the exile of Kashmiri Pandits, who were in a minority in Kashmir, and were driven into exile in 1990 in the aftermath of Islamist extremism. But recently the newly made Minister of State, Human Resource Development, has been making statements that are as ridiculous as the history lessons of an NCERT textbook.

In January this year, Tharoor was in Pakistan, where he appeared in a televised discussion organised by the Islamabad- based Jinnah Institute. While Tharoor remained steadfast on India’s position on terror and Kashmir, he played into the hands of a co-panelist who blamed the Pandits’ exodus on then Kashmir Governor Jagmohan. While mentioning Pakistan’s role in Kashmir, Tharoor says: “My wife is a Kashmiri Pandit. She grew up in the [Kashmir] Valley. And her 200-year- old home was burnt down by terrorists; certainly not by her neighbours who she grew up with, but by people who came across the border”. To which his co-panelist Naseem Zehra says: “But you know it was the BJP’s policy to remove Pandits from the (Kashmir) Valley.” Shockingly, Tharoor nods his head and says: “I think it was a terrible policy and she and I would agree on that.”

Whose terrible policy? Tharoor seems to have forgotten that in 1990 Jagmohan was not with the BJP. He was sent by the VP Singh Government to restore law and order in Kashmir, where the administration seemed to have collapsed. The exodus of Kashmiri Pandits had already begun when he took charge.

Tharoor recently went on to tweet that he knew many Pandits who blame ‘BJP’s Jagmohan’ for their plight. Hundreds of Pandits responded angrily to this untruth. He later stressed that his in-laws wouldn’t have left if Jagmohan had not asked them to leave. While it’s not clear under what circumstances Tharoor’s in-laws left the Valley, the facts of the Pandit exodus and the circumstances that led to it suggest otherwise.

Right from the beginning, Congress leader Rajiv Gandhi tried his best to sabotage Jagmohan’s mission in Kashmir simply because he wanted to play petty politics against the then VP Singh Government. He forgot that it was his mother who had sent Jagmohan in 1984 for his first tenure as Governor. In March 1990, Gandhi landed in Srinagar with a political delegation and acted petulantly by raising non-issues like where Deputy Prime Minister Devi Lal was made to sit (to the left of the Governor in an apparent breach of protocol). He of course did not visit the Pandits who had already fled to Jammu. In May the same year, Gandhi’s cronies tried to stall proceedings in Parliament by quoting an interview Jagmohan had given Mumbai-based magazine Current in which he allegedly said: “Every Muslim in Kashmir is a militant today… the bullet is the only solution for Kashmir.” This interview is still used by propagandists to pin the blame for the Pandit exodus on Jagmohan. The fact is that Jagmohan never gave that interview; in fact, he filed a Rs 20 lakh damage suit against the weekly in the Delhi High Court immediately after. Both the correspondent and the weekly’s editor were forced to tender a written apology to Jagmohan.

Fact is that by March 1990, Kashmiri Pandits were being brutalised on the streets and inside their homes by mobs. Many were killed in cold blood, scores of women were raped. Despite this, Jagmohan’s office issued an appeal in newspapers on 7 March 1990, asking Pandits not to leave ‘even temporarily’. He offered to set up temporary camps for them in the Valley.

The truth of the Pandit exodus is stated courageously by veteran Kashmiri journalist and Srinagar Times editor Ghulam Mohammed Sofi in an interview he conducted in 1997 for a book. Asked about Jagmohan’s alleged role in the exodus, Sofi remarks: “It is a total lie. It is part of systematic propaganda. The Pandit flight from the Valley was the sequel to a plan hatched well in advance from outside the state. It had nothing to do with Jagmohan.” To another question about the situation in the Valley when Jagmohan took over as Governor, Sofi says: “There was no administration worth the name anywhere in the state… I mean in the Valley. Police stations all over the Valley were centres of operation for militants. Jagmohan could not have done anything. Nearly 32,000 Kashmiri Pandit houses have been burnt since 1991. Is there Jagmohan’s hand in this too?”

One would have expected authors of books such as Pax Indica to have a better understanding of Kashmir. In 2010, Congress spokesperson Manish Tewari, who seems to suffer from a virulent form of foot-in-mouth disease, had said it was a ‘fear psychosis’ created by Jagmohan that led to the exodus of Kashmiri Pandits. But then he is Manish Tewari.