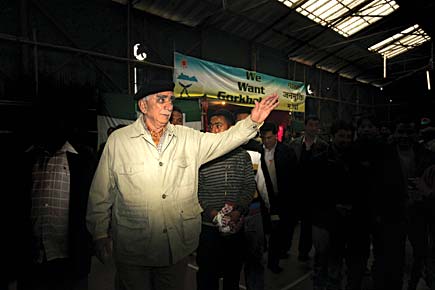 
WATER SCARCITY IN a desert, where he hails from, is understandable. But what baffles India’s former finance minister is the people of Darjeeling, which is washed by frequent showers, buying water. And he blames it on “thirty years of criminal neglect” of the hills by the ruling Marxists in Kolkata. A neglect that Jaswant Singh, the BJP candidate from Darjeeling, promises to reverse—largely by helping the people here achieve their dream of a separate Gorkhaland state. For now, he has just promised the largely Nepali-speaking people that he’d articulate (in his baritone voice, of course) their hopes, demands and aspirations in Parliament.

If the Darjeeling constituency had been only about hills, Jaswant Singh would have staged a stunning win. His prominent rivals—the CPM’s Jibesh Sarkar and the Congress’ Dawa Narbula—didn’t even muster the courage to campaign in the hills, especially since the powerful Gorkha Janamukti Morcha (GJM), an NDA ally, was promoting Singh as its trophy candidate. But voters in the plains, more than 622,000 of them, outnumber the nearly 566,000-strong hill voters. And a large section of the electorate in Darjeeling district’s four sub-divisions in the plains are strongly opposed to Gorkhaland. The minority vote is Jaswant Singh’s only source of worry in the hills. Christians, Muslims and Bhutias (migrants from Tibet) aren’t exactly fond of the GJM chief Bimal Gurung, who publicly threatened them with dire consequences if they didn’t vote BJP.

The overall dynamics, though, still give Jaswant Singh a good chance in Darjeeling. “Advaniji called me to say that the party wanted me to contest from Darjeeling. He said the GJM also wanted me in Darjeeling. I was pleasantly surprised and agreed,” says the septuagenarian leader, who was even more surprised by the rousing reception he got at Siliguri airport. As a young army officer posted at Hashimara in North Bengal in the early 1950s, Jaswant Singh used to visit Darjeeling. “It pains me to see the state it is in today. The roads are appalling, there’s no water supply…people face such terrible hardships.” Neglect is his main theme. If Rajasthan was his janambhoomi (birth place), Darjeeling would be his karambhoomi [work field].

Asked by Open if this would be irrespective of the poll outcome, he asserts, “Of course. Elections and results have nothing to do with this decision of mine. It’s from my heart.”

This is reassuring for people who had a bitter experience with another outsider, Inderjit Khullar, who helped broker the 1986 Gorkhaland accord, but then vanished. “Jaswant Singh is not Khullar. He is an honest and sincere man,” says GJM general secretary Roshan Giri.

Jaswant says he truly believes in the Gorkhaland cause. Smaller states, he says, “are more representative, and over time are more efficiently run, their governments are more answerable to the people and they only strengthen the federal structure of our country”. His supporters want these words heard in Parliament.