Have Laws, Will Flout 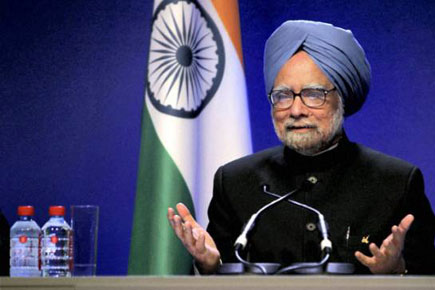 
The Prime Minister has spoken. His chosen lieutenants, Montek Singh Ahluwalia and C Rangarajan, have their job cut out to fight the economic slowdown. The brief is simple: revive investor sentiment by disarming taxmen and throwing environmental rules out of the window.

So the Centre is tracking the progress of every investment above Rs 1,000 crore to ensure that these projects go through. The National Manufacturing Competitiveness Council has asked all ministries to provide details of public sector projects above Rs 1,000 crore, prompting them ‘to indicate whether there are any sector specific issues such as environment and forest clearances which may be causing delays’.

From Kamal Nath (Road and Surface Transport) to Sriprakash Jaiswal (Coal), Dr Singh’s ministers have been up in arms against the Ministry of Environment and Forests (MoEF) during the UPA’s second stint in power. The Planning Commission has slashed the budget of the green ministry twice since 2011. The Reserve Bank singled out ‘environmentalism’ to blame for a one-third dip in foreign direct investment (FDI) last year. The Prime Minister himself cautioned that green regulatory standards might bring back the dreaded licence-permit-quota raj. The build-up is finally complete. Now that the economy’s animal instincts have sensed a second round of reforms, Team Manmohan has bared its claws.

But sarkari environmentalism is a myth perpetuated by Jairam Ramesh’s relentless media posturing. During his tenure in the MoEF, the ministry cleared 99 per cent of the projects referred to it. His high-profile clash with Jaiswal over ‘go’ and ‘no-go’ areas for mining ended in Ramesh conceding 85 per cent areas to the go list. Since 1982, the MoEF approved 94 per cent of coal mining projects. Between 1982 and 1999, the average delay in project clearance was five years. During BJP rule, it came down to three years. The UPA-I further reduced it to 17 months. The UPA-II takes 11 months to decide on a project and its rejection rate has been just 1 per cent. Yet, the Government blames environmentalism for the sagging economy.

Beyond the reform-or-perish frenzy whipped up by the media, lie a few home truths. Yes, the stock market is sluggish but not more than 7 per cent of Indians hold any equity. The Prime Minister must worry because falling stock prices wiped out about a fifth of the total value of his country’s 100 wealthiest citizens last year. But if his reforms jeopardise the already-compromised ecological security of the country, the livelihood and food security of hundreds of millions of Indians will be further at stake. If more people now go hungry after two decades of liberalisation, which is a grim fact, the economy cannot hardsell the trickle-down benefits of reforms.

Posco, for example, wants to invest Rs 52,000 crore in its Odisha plant. The Prime Minister himself has expressed strong commitment to see the project through. The 2005 MoU allowed the MNC to extract 600 million tonnes of iron ore over 30 years, and ship out 30 per cent of it. The MoU also conceded that Posco would source an additional 400 million tonnes of iron ore from India for its plants in South Korea through supply arrangements from the open market. There is a fat margin between the domestic open market (average Rs 4,400 per tonne) and the international price (average Rs 7,400 per tonne) of iron ore. For 400 million tonnes, it adds up to Rs 120,000 crore, more than double the proposed investment.

Forget about the ravaged forests and displaced communities, such a deal will also weaken our resource security. India is the world’s largest iron ore exporter after Australia and Brazil. But in terms of per capita reserves, India has only 21 tonnes against Brazil’s 333 and Australia’s 2,000 tonnes. Business-as-usual will exhaust India’s iron ore reserves anytime between 2025 and 2040. But we are desperate to open our reserve for a few thousand crore.

A set of green laws—environment pollution, forest and wildlife protection—and the Forest Rights Act obstruct the free run that industry thinks it deserves. Ironically, it is the Congress that enacted these legislations. The green laws are the legacy of former Prime Minister Indira Gandhi. The Forest Rights Act was a prime achievement of the UPA-I.

If India’s green laws were applied fairly, a bulk of the projects would’ve been summarily rejected. But since the establishment wants to get every project cleared, it drags the clearance process on by instituting panel after panel until the facts get lost in a maze of referrals and finally a go-ahead is obtained. Most projects take off without due diligence, trusting the establishment to clear those as fait accompli after a suitably long clearance drama.

Parliamentarian Naveen Jindal’s Jindal Steel and Power started construction at its Angul plant in Odisha without obtaining clearance for the forest land and was served a notice by a divisional forest officer in July 2009. In February 2011, the MoEF absolved the Congress MP. The national highway expansion drive felled thousands of trees across the country without even bothering to obtain statutory permissions. But asked to construct a few flyovers to protect the integrity of India’s last few viable forest landscapes, the NHAI drags its feet and complains of delays in forest clearances.

If the Prime Minister wants to fast-track the clearance process, he should insist that every project factor in the environmental costs at the conception stage instead of resisting legally binding green safeguards later. At the same time, both government and private developers should stop pushing projects in ecologically sensitive areas that add up to less than 5 per cent of the country’s land area.

Under pressure, successive green ministries have diluted several rules, from the norms for coastal regulation zones to restrictions on industrial pollution. If there is a policy compulsion, the reform agenda should now include abolition of India’s green laws in Parliament. It will save the Government the hypocrisy of enacting laws only to sidestep them.