The villages of Mathura, a district of stark contrasts just 155 km from Delhi, are reeling from the worst agrarian crisis in a decade 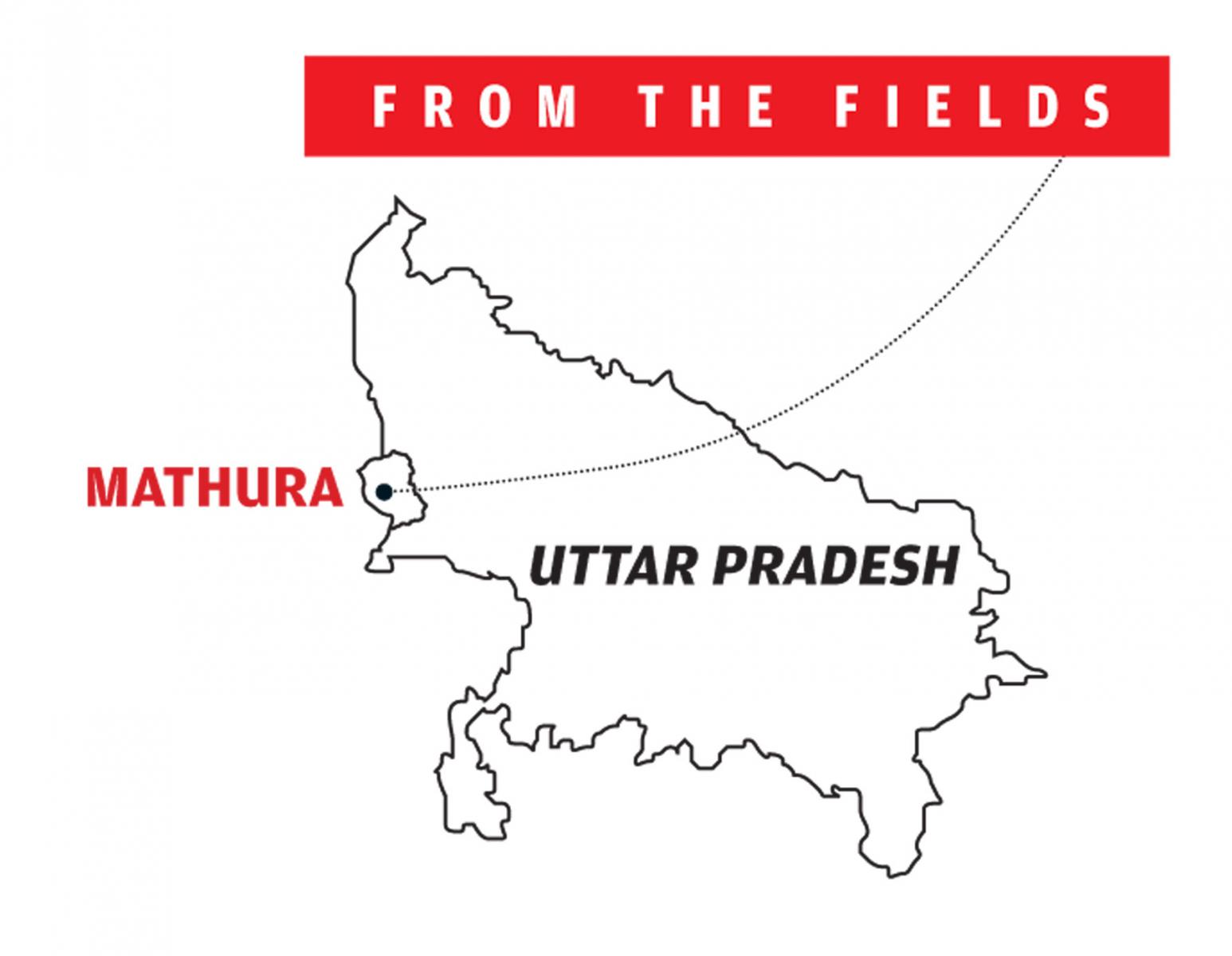 It takes just an hour and a half to cross the 155 km distance between Delhi and Mathura via the Taj Expressway. At first glance, the growth along the highway, flanked by impressive college buildings, seems encouraging. But things change just 500 metres inside. On the road from Akbarpur to Sihana village, the real Mathura unravels. Fields of golden wheat have been laid waste here and an agrarian crisis has yawned open, sucking in many lives. “It is the biggest crisis Mathura district has faced in a decade,” says Rakesh Babu, deputy director, agriculture, Mathura. “In the past two months, the district has got eight times more than the average rainfall, which has dashed hopes of good rabi crop.”

In 2014, the kharif crop had suffered under drought-like conditions with only around 268 mm of rainfall. Farmers were expecting to make up for it with a better rabi crop. “Nothing is left now,” laments Tularam Pehelwan, a farmer in Sihana. His wife Purandei is the village pradhan. He takes us to the house of Govind Ram, who died after suffering injuries in a hailstorm that hit the district early this month. His wife Chandravati sits on the floor, mourning her loss. Govind had gone to check on his wheat crop when the hailstorm started. Grievously injured, he was rushed to hospital and died two days later. The Government has released a cheque of Rs 5 lakh, but the amount is yet to be credited to Chandravati’s account. “People come and tell me that I should be happy. That my husband has made me rich,” weeps Chandravati. “Take the money and return my husband. Without him, what will I do with the money?” Her daughter Kela Devi is married and lives in a neighbouring village.

Stories of death and despair spill out of every other household in Sihana. “Being a farmer for all these years has not paid off,” says 50-year-old Jagdish Prasad. “We are getting poorer each year.” Prasad has 1.5 hectares of farmland and invested about Rs 60,000 towards producing a crop of wheat. A part of it came as loan from the State Bank of India and some from a moneylender who charges 36 per cent annual interest. “I won’t recover more than Rs 15,000 even if I sell the entire produce,” he says. For the next kharif season, he is planning to sell a portion of the land so that he can pay off his debts and continue farming. “At this rate, I will become landless in five years,” he says.

Fifty-one farmer deaths have been reported in Mathura district over the past two months. The government claims only four of these were suicides and compensation of Rs 5 lakh has been released for each of their families. In other cases, farmers reportedly died of shock or heart attack over near-total crop damage. But that is not covered under the government compensation scheme. “Suicide is the culmination of a farmer’s agony,” says farmer leader Ganga Singh of Daraula village. “The reality is, given a choice, no one in the area would like to do farming anymore.”

As per Uttar Pradesh Government data, Mathura has 231,617 hectares of farmland. Around 60 per cent of the area doesn’t have access to good quality water for irrigation. Only 92, 648 hectares of land is irrigated by water canals. For the rest, farmers depend on borewells or rain water. “Those who have a large chunk of land somehow manage to bear the cost of borewells. But they are very few,” says Brajlal, a farmer from Petha village. “In my village, no one has more than 1.5 hectares of land.” Fragmentation of land due to inheritance and diversion of land for non-agricultural purposes have caused the average holding size to shrink from 1.33 hectares in 2000 to 1.15 in 2011, nationally. In UP, where it has gone down from 0.83 in 2000 to 0.70 in 2010, the costs of agriculture are unaffordable for marginal farmers.

The Government has a role to play in their misery, say farmers. The marginal cultivator is often seduced by various farm subsidies such as agriculture credit, fertiliser subsidy and crop insurance, and ends up leasing farmland hoping for the best. “The Government incentivizes farmers to remain poor,” says 52-year-old Hukum Singh, a farmer from Tarauli village. “It should educate them about how can get a better yield with sparing use of urea, better quality seeds and even cash crops.”

“Sab barbaad ho gayo; mo jaan de debo (Everything is lost. I’ll give my life).” That is what 45-year-old Sheeshpal Singh said to Hukum Singh. The villagers tried to mollify him, but he was inconsolable. It was around 8 in the morning. His wife had gone to work in a neighbour’s field. His children were out playing. Sheeshpal took a five-litre can of kerosene, went to the roof of his house, and set himself ablaze. Villagers rushed to the rescue, but he was declared brought dead at a nearby hospital. He has left behind five children and a debt of Rs 10 lakh. His elder son Sonu is 16 years old and uneducated. Sheeshpal couldn’t afford educate his children. “Please tell me what I should do. My siblings ask for food and toys. Where will I get all that?” asks Sonu of anyone who comes calling.

Sheeshpal had mortgaged his 1.5 hectare holding to get his elder daughter married. In the last season, he took 3 hectares on lease to grow paddy and invested heavily in it, borrowing from banks and local lenders. The paddy crop did not meet his expectations, but he was looking forward to the wheat. Sheeshpal had started working as a labourer in a factory in Bhiwadi to support his family. When he returned to his village on 7 April and saw his crop the next morning, he was shattered.

The situation was not so dismal a few years ago, when the Chata sugar mill was still operational. “We grew sugarcane and took it to the sugar mill and got a good return on farming,” says 52-year-old Puran Singh, a farmer from Tarauli. Puran Singh has four hectares of land, the highest in the village. When the erstwhile Mayawati government of UP decided to sell 21 sugar mills in 2010, the Chata mill was one of them. “The government did not pay us for the sugarcane, and now the mill is shut,” says Puran Singh. Its closure forced the farmers to go back to the dual crops of paddy and wheat. The Wave Group, which acquired the mill, has no plans to start operating the mill in the near future and an enquiry into the sale of mills is underway.

Living just 160 km from the capital, the youth of Mathura aspire for a better life. But few can make the giant leap. They cannot afford an education at the engineering and medical colleges and private schools that have sprung up here in their neighbourhood over the past decade. “Not a single student from the area gets into these institutes,” says 45-year-old Ramesh Singh, a teacher in Pilhora village. “Most farmers’ children attend government schools and don’t go to college at all. They either take up odd jobs in Delhi or start working as daily wagers in upcoming development projects, earning about Rs 250 per day.” His own son Satish Sharma works with Reliance as field staffer in Delhi. Farmers are all too willing to sell their lands to developers, but here, too, only those with holdings by the roadside get good value.

The people of Mathura can never really reconcile the so-called growth story of India with their life of desperation. “No farmer wants his son to be a farmer and to get trapped in this debt cycle,” says Radha Charan Singh, a farmer and labourer from Daraula. “Here, only death can bring some relief.”