Our contempt is the only thing the terrorists deserve. 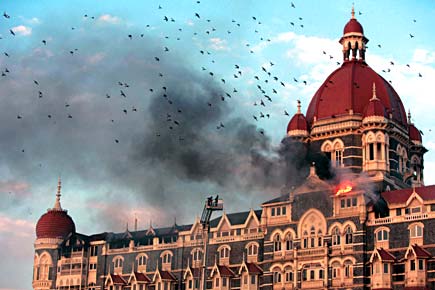 Sure the terrorists had a reason, or they believed they did. But we should not even try to guess at their reasons.


I have never met Kavya, though I have seen her photos. Minutes after she was born, her father sent me an SMS: "It’s a beautiful and very angry girl." She is six months old, I am told she has a personality of her own, and, according to her father, shits and vomits far larger quantities than any input-output ratio theory or the law of conservation of mass can justify. She is a little baby, and her own person, demanding from the world every incidental thing that she wants, from moment to moment, and insisting that her whimsies are serviced.

She woke up with a start one night last week at the sound of a blast at Nariman House, which is a stone’s throw from where she stays. For the next two days, she was upset and fretted because the sound of military helicopters hovering above the area was a constant. She wanted to know what had gone wrong in her world and why it was too noisy for her to go to sleep. But she has no language to express herself.

Why couldn’t tiny Kavya get the sleep she deserved and needed?

What the hell did these terrorists want?

What do these men want, for heaven’s sake?

Across the world, thousands of innocents have been killed in the past two decades, for reasons that are unfathomable to anyone with any reasonable amount of rationality. This is not about Kashmir, this is not about Palestine, this is not about Iraq, this is not about US or Western hegemony. As a friend of mine said, no one has ever done anything in his or her life without a reason. These terrorists too had a reason, or at least they believed they had, they were brainwashed into thinking that they had. Now this is my proposition. We should not even try to guess what they thought the reason was. It is not important. The reason was so wrong that it is as trivial as your next-door neighbour believing that the mighty Kalki is about to appear on a white stallion with a flaming sword and establish heaven on earth. The views of wackos should not be accorded importance.

We saw the pictures. The clean-cut young man with the fashionable hairstyle, wearing cargos and a Versace T-shirt (most likely fake), smiling as he hurries by, carrying an AK-47 and two haversacks loaded till they burst at the seams with instruments of death. We watched television for 60 hours. We saw our brave soldiers battle it out for every square foot, knowing fully well that the fight could have been shortened by a factor of 10 if their primary concern had not been saving the lives of the innocent, the hapless hostages. Men died because, to them, the lives of the hostages were sacred. Say thank you. Say it.

Amazingly, even though Islam is a religion that is sufficiently unambiguously all-encompassing—it is a social, a political and an individual moral system, more than any other religion—the words of Allah have been, and are being, understood in more ways than the prescriptions of any other holy book. One reason is a simple linguistic one: the fact that the Quran was written in classical Arabic. As a result, many Muslims are influenced by fanatics who have read poor translations of the Quran or have chosen to believe the most rabid versions. Much of the Quran is metaphorical and, in the hands of vested interests, many of its verses could be given altogether false literal explanations. But the principal reason is that religious fervour has been used as a tool by cynical leaders to serve their own political ends. With small excerpts from the holy book quoted out of context, by lying about its contents to illiterate and impoverished people to whom an ‘honourable death’ seems a much better prospect than their lives of quiet desperation.

And this is hardly new. I do not want to go into history: the Hashashins of the 11th century, who smoked hashish and killed (and gave us the word ‘assassin’), the Wahhabis who believed in a militant Islam and are cited by historians as the philosophical fountainhead for Al-Qaeda. I do not want to go into the history of the formation of Pakistan and the Direct Action Day called by Jinnah on August 15, 1946. I know a gentleman who was in Calcutta that day. When he went home to Karachi four days later, his family was sickened by his body odour. It was the ‘Calcutta stench’: the smell of having stayed in a city with too many corpses decomposing in the streets.

There are nearly 180 innocent people dead in Mumbai, including children. No ransom demand was made, as far as we know. Perhaps no demand was made concerning anything. These young men, with their deluded visions of how the world works and what Allah wanted, simply came in and killed. Many of the people who died—without a clue about why they were being fired at, what they had done to deserve it—were Muslims; in fact, an astonishingly high percentage (33 out of 176 dead, by last count), given our nation’s demographics.

One does not even know how many more men, women and children have been maimed for life. Doubtless, in the twisted minds of many people across the world, these despicable terrorists will be seen as heroes and martyrs. These people will never allow themselves to realise that the Mumbai killers were cowards with sick ignorant minds, total losers unworthy of being called human and whose legacy is only disgrace and shame.

What did they want? What were they thinking? That killing innocent people would take them to heaven? Heaven is not a multiplex, with so many ways to book your ticket.

They did not know what they wanted. They had nothing to offer. They were the vermin who even cockroaches would detest. One cannot call them misguided. No. That would be a charity. I know two people who narrowly escaped with their lives from the Taj and the Oberoi, and I knew at least two people who died. They were good people. And everyone who knows them, or anyone else who died in Mumbai over the three days of terror—and many of us do—will wonder about the meaning of life itself, the order of things and the appalling strangeness of the quality of God’s mercy.

One will never understand the motivations of the men who wrought these murders in Mumbai, one will never know what exactly they hoped to achieve. And one should not even try. There’s no point. Mere contempt, wholesome pure contempt is the only thing these men deserve. And then, just forgetting. So that, the only thing they perhaps wanted—memories of them, of what they did, either fearful memories or admiring memories—are denied them. The pitiable creatures who will have admiring memories of them, we can do nothing about them other than to track them down and give them a taste of what Allah truly feels about them. As for the rest of us, we should choose contempt as their tombstone.

We must not give them what they wanted. We must deny them their only pathetic demand. The memory of them. Let’s roll.