Despite denials from New Delhi, Congress workers in Amethi and Rae Bareli hope and prepare for Priyanka’s political debut 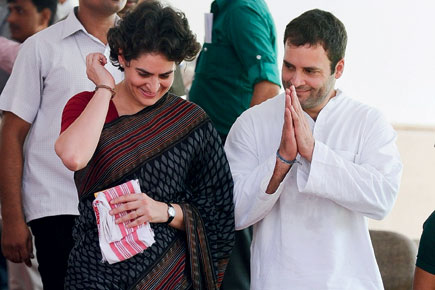 Despite denials from New Delhi, Congress workers in Amethi and Rae Bareli hope and prepare for Priyanka’s political debut


As Congress leaders at 24 Akbar Road, the party headquarters in New Delhi, ponder the semantics of what a larger role for General Secretary Rahul Gandhi means, back in the family’s pocket boroughs of Amethi and Rae Bareli, there is a different buzz. Concerns over party chief Sonia Gandhi’s health have raised expectations of Priyanka Gandhi Vadra’s emergence on the political scene. Speculation about the younger sibling contesting the next Lok Sabha election from one of the two constituencies, represented in Parliament by Rahul Gandhi and his mother, is back to pre-2004 Lok Sabha election levels. Locals, including Congress supporters and Assembly-level Congress leaders, had expected Priyanka to contest the Lok Sabha election then and had even prepared for it.

“Rahul Gandhi left the country during Rajivji’s time and had remained abroad from 1987 onwards. It was his sister who would visit Amethi and look after the constituency, along with the Congress President, or in her absence. Then in 2003, as we started preparations for the next year’s Lok Sabha elections, instructions came from the top that an office be set up in Rae Bareli. Soon, we started operating from Pandey Kothi (Sonia Gandhi’s current office in her constituency). It was clearly Priyanka who was to contest from one of the two constituencies,” a local Congress leader recalls. “Now again with madam (Sonia Gandhi) planning to go abroad for treatment soon, expectations of Priyanka to replace her in the next election have grown. Earlier, her children were small, now they have grown up. She can contest the election and we are preparing the ground for that,” he tells Open.

Rahul Gandhi quit his job abroad in 2002 and came back to India. Even then, he did not enter politics. Instead, he set up a management consultancy in Mumbai. It was only in early 2004 that he visited Amethi with Priyanka, and speculation of his entering politics began. On that tour of Amethi, Priyanka was Rahul’s guide. She took him around the constituency and introduced him to people there. In March, the Congress announced Rahul’s candidacy for the Amethi seat, and Sonia Gandhi vacated the seat for him and moved to Rae Bareli. Priyanka has stayed away from contesting elections ever since, but has been an active campaigner in polls both at the Parliamentary and Assembly levels. Of the 10 Assembly constituencies in Amethi and Rae Bareli, the party won seven in the 2007 elections, without which its tally of a mere 22 of 402 would have seemed even more inconsequential. “The party’s performance in the area was largely due to Priyanka’s active campaigning,” says an insider. Earlier, in 2006, when Sonia Gandhi resigned from Parliament over the office-of-profit controversy seeking a fresh mandate, Priyanka was her polling agent. But it was Rahul who managed the campaign and camped in the constituency for days on end. He held as many as a dozen public meetings each day for a fortnight. That was the first election he managed. Priyanka had remained in the background and her visits to the constituency gradually reduced.

“She comes here only during elections and for a few odd functions. But she is actively involved with self-help groups (SHGs) here. Priyanka has always campaigned very actively in all elections, and that has fetched very good results. She has a special knack of mingling with people the way Indiraji did,” says Kalyan Singh Gandhi, a local Congress leader in Rae Bareli and a confidant of the family from Indira Gandhi’s time. “Congressmen here want her to come out and contest,” he says. There are many who opposed Indira but support the dynasty. For instance, Rae Bareli-based lawyer Jai Prakash Singh. “I vehemently opposed Indira Gandhi during and after the Emergency. But I now vote for the family out of a lack of options. Congressmen here have begun saying that Priyanka’s entry into electoral politics will be the miracle their party needs. She stays in touch with a few thousand families through self-help groups, and that should give her some sort of edge in the election,” says Singh. The SHGs run by the Rajiv Gandhi Mahila Vikas Pariyojana, which Priyanka monitors closely, have almost 300,000 women from different parts of the state involved in small income generation and employment initiatives. Before the 2004 election, the number stood at a mere 6,000.

On the ground, speculation over a bigger role for Priyanka has turned feverish with reports that Sonia Gandhi is ill. “Rahul Gandhi has worked very hard in UP. If ministers in the Government from UP had worked even half as hard, our chances in the Assembly polls would have improved a lot. He is trying to make the Congress the main challenger to Mayawati’s regime. Projecting Priyanka at this stage in any sort of role will only add to his efforts,” says a local leader in Amethi. He hopes to contest the Assembly polls next year on a Congress ticket.

In Lucknow, an Uttar Pradesh Congress Committee (UPCC) leader rubbishes all talk of Sonia’s illness and Priyanka’s entry into politics. “This is all BJP propaganda,” he retorts. Closer to the centre of power in the party, the manner of refutation gets even more acerbic. Asked about the Congress President’s health and a possible visit in the near future to the US for follow-up treatment, Janardhan Dwivedi, party General Secretary and chief of the media department, shot back at a reporter on 8 November that the information was, “total rubbish,” adding, “I don’t even consider it worth a response.” Dismissing a question on whether Sonia Gandhi would be fit enough to campaign in the UP elections, Dwivedi declared she would be addressing a rally in Uttarakhand the very next day to kick off the party’s election campaign in that hill state. Only, on the day of the rally, he was made to eat his words and instead announce: “The Congress president is suffering from fever. Her visit to Uttarakhand has been cancelled.” Instead, Sonia’s address was read out at the rally scheduled in Chamoli, Uttarakhand.

Even in Delhi’s Congress circles, murmurs of the scam-ridden UPA using Priyanka as a trump card in 2014 have been doing the rounds. So when Dwivedi was asked at the same briefing if she would indeed enter the arena of active politics, he said, “They themselves decide who in the family has to do what, and right now Rahul is in politics.”

In early 2004, when Priyanka had taken her brother for a tour of Amethi, the national media—particularly news channels—followed them, and an informal interaction turned into an impromptu press conference. Asked if she was going to contest the election or agree to play a bigger role, Priyanka shot back at a journalist, almost laughing: “Who will give me a larger role? I have to decide for myself.” Given the casual setting, an editor of an international news service said she had answered “like a Gandhi.” Unfazed, she added: “I have been hearing this about myself since I was 15. And I hear of my entering politics mostly from you (the media).”