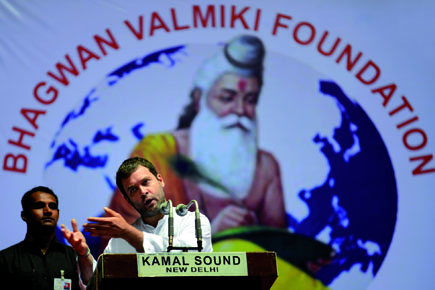 
Rahul Gandhi’s outburst against Mayawati on 8 October has a context that is more complex than it may appear at first glance. Over the past few months, his Congress party has been moving with slow subtlety on a plan to persuade her Bahujan Samaj Party (BSP) into a tie-up ahead of the Lok Sabha polls. The hindrances that had come up were being negotiated quietly—until the Congress leadership ran out of patience and Rahul Gandhi made his public statement holding her responsible for not letting other Dalit leaders emerge in politics. “She has captured the leadership of the Dalit movement and does not allow others to rise,” he said, addressing a conference organised by the country’s SC/ST Commission in Delhi.

So sharp were his words that the possibility of a tie-up would now seem the last thing the two parties can discuss. Political observers, however, see it as a tactical threat to pressure Mayawati to accept the grand old party’s overtures. “So far, the Congress had been holding out the promise of Muslim votes to the BSP,” says an observer, “But Mayawati stayed coy on the matter. The only way she can be made to see a reason to align with the Congress is by the latter making a serious bid to divide Dalit voters.” Gandhi also announced in his speech that his party would make a concerted effort to foster Dalit leadership at every level. “One or two Dalit leaders are not enough to take this movement forward. Lakhs of Dalit leaders are needed,” he said, adding that his party would make space for them within it.

Interestingly, even though he attacked the BSP chief, the Congress vice-president acknowledged the significance of her role in what he called the country’s second phase of Dalit empowerment (Ambedkar’s efforts being the first). That the Congress is keen to pressure the BSP into joining hands with it is also clear from the fact that the ruling party is working on a Dalit outreach blueprint prepared by former IAS officer K Raju, now a member of Rahul Gandhi’s team.

It is far from clear whether Rahul will succeed in reaching out to Dalits, once the Congress’ mainstay, and be able to coerce the BSP to go along with the plan. What is certain is that in case the two parties do contest the General Election jointly, it would be a win-win deal for both. For more than two decades, Uttar Pradesh—the state where the BSP holds sway over Dalit votes—has seen its politics hinge on a potent political factor in the shape of a Muslim-Yadav alliance with the Samajwadi Party (SP) at its helm. Now, for the first time, a scenario has emerged that could see Dalits and Muslims join forces as voters in an attempt to trounce other social combinations in the state.

The Congress Party’s eagerness for a BSP tie-up is not based just on the potential of a winning social formula. It is based on a ground assessment of voter inclinations in UP. The grand old party’s internal calculations show that it would get only three to five seats in the state (of the 80 in contention) if it goes alone in 2014. This would be a crash from its current state tally of 22 and explains why most of those who hold these seats in the Lok Sabha are so nervous right now.

The Congress is confident that the state’s Muslims are inclined to vote for it in 2014 just as they did in 2009. But they would not like to waste votes on candidates who have no other support base and thus cannot win. So the party needs a ‘base vote’ before it can count on minority support. In 2009, a section of upper-caste voters in UP are said to have acted as a base for the Congress to attract Muslims to its fold in several constituencies.

This time round, the state’s upper-castes are seen shifting in favour of the Bharatiya Janata Party (BJP) so completely that the Congress is in crisis. It is this prospect of an impending loss that has frightened Congress MPs of the state and coaxed its High Command to seek a pre-poll alliance with the BSP.

From the Congress point of view, the calculation is simple. In UP, Dalit votes account for nearly 21 per cent of the entire electorate, spread evenly across most constituencies, and these have the potential to more than make up for a loss the party would suffer in case of a switch of upper-caste votes to the BJP. The BSP, on the other hand, is aware of Muslim anger against the Akhilesh Yadav-led SP government in the wake of the recent Muzzafarnagar riots in particular and a series of communal convulsions in general. Given this discontent with a regime they themselves helped put in power, Muslims may be inclined to vote for any non-SP party that appears to be in a position to defeat the BJP. This spells hope for the BSP, which considers itself best placed to lure Muslims upset with the SP. Since it has had their support in the past, this is no idle hope of Mayawati’s.

However, to ensure the support of Muslims in 2014 and enhance her Lok Sabha tally on the back of a Dalit-Muslim combination, Mayawati may need to reaffirm her party’s opposition to saffron politics. She has twice formed a government in UP with support of the BJP, and so her secular credentials have been held suspect by many. In contrast, the Congress is seen as an all-India party steadfastly opposed to the BJP; this would hold sway with voters who are anxious about a saffron resurgence. In this context, a pre-poll alliance with the Congress could act as a ‘secular certificate’ for Mayawati to get Muslim votes.

Once a Dalit-Muslim combination proves successful, she would still be in a position to walk out of the grand old party’s shadow. In fact, this was the tactic that BSP founder Kanshi Ram had adopted back in 1996, when the two parties had a pre-poll alliance for Assembly polls. In that election, the Congress contested 300 seats and the BSP just 125 of the 425 in the fray (Uttarakhand had yet not been carved out of UP). The BSP won 67 seats while the Congress got just 33. That election was a key turning point in the BSP’s electoral history. Many observers believe it marked the party’s monopoly over Dalit votes in UP, robbing the Congress of whatever support it had left among them.

The first credible indication that Mayawati might not be averse to an alliance with the Congress surfaced this April at a BSP rally in Chandigarh. She declared that her party would keep up its support of the Congress in Parliament to “keep communal forces at bay”. The BSP has helped the Congress-led UPA Government get past multiple hurdles in the Lok Sabha, the passage of the Retail FDI, Food Security and Land Acquisition bills among them.

Besides working together in Parliament, the two parties also began a clandestine political dialogue aimed at wresting the Muslim vote in UP from the SP. According to sources, Congress leader Madhusudan Mistry, who is in charge of UP for the party, and BSP leader Satish Chandra Mishra have met frequently to discuss a possible seat-sharing formula focused on UP. “A consensus seemed to be evolving on a formula whereby the BSP would support the Congress in all 22 seats it holds in the state and Mayawati’s candidates would contest the rest of the 58,” discloses a Congress leader.

But the dialogue soon ran into turbulence. Congress sources blame it on Mayawati’s condition that the alliance must not be limited to UP, but be effective across the entire country. The Congress, however, is wary that a nationwide alliance with the BSP could do to it what the 1996 election in UP did—hand the country’s Dalit vote to the country’s most famous Dalit leader. The 1996 shock marked the near-demise of the UP Congress, which had already lost Muslim support after the Babri Masjid demolition of 1992 (regained partially in 2009).

Sources in the Congress say that talks with the BSP have been in a deadlock for the past two months, and may well explain Rahul Gandhi’s outburst of 8 October. So far, Mayawati appears to have kept her cool. A pragmatic leader in the Kanshi Ram mould, she may have a practical reason to stay rigid on her position.