From Dharma to Chaos

Both the Congress and BJP are finding it increasingly hard to retain their allies. They have only themselves to blame 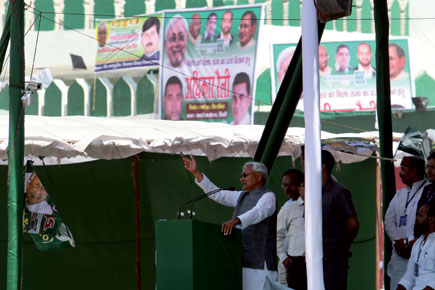 Both the Congress and BJP are finding it increasingly hard to retain their allies. They have only themselves to blame


The Congress has perfected the art of compounding crises of its own making. It may or may not be able to pull itself out of the temporary crisis created by the Dravida Munnetra Kazhagam’s dropping out of the United Progressive Alliance, but it will still have to appease the Samajwadi Party for the support of its 22 MPs. With the DMK pullout worsening the Congress’ problems, the SP too wants to teach the Grand Old Party a lesson for failing to keep Steel Minister Beni Prasad Verma on a leash. Verma insulted the SP chief and his former boss Mulayam Singh Yadav and may have to pay with his job. Even if these issues are resolved, the Congress will be left with a handicap that will not disappear on its own: its inability to keep allies sufficiently satisfied.

The DMK’s dumping of the tainted Congress-led alliance was probably catalysed by its spying an alternative alliance with Vijayakanth’s DMDK, which could fetch the DMK greater electoral dividends, and its fear of losing its Tamil plank to Jayalalithaa’s AIADMK. These were the DMK’s own motives. But the Congress’ SP problem is an unnecessary one for which it has only itself to blame. Verma, who the Congress poached from the SP, was unrestrained in his words against Yadav. “Mulayam takes a commission for supporting the UPA,” he had said.

It was barely a few months ago that the Congress let Mamata Banerjee walk out of the UPA. For the last three years, the Congress had been sending her party, the Trianmool Congress, signals that it was unwanted in the alliance—despite its dependence on it for its Lok Sabha majority. After the UPA returned to power in 2009 with the Congress winning 206 seats, the party—egged on by Rahul Gandhi’s spreadsheet politics— has been harping on going it alone in the belief that it could get closer to the majority mark on its own. It was Manmohan Singh who set the ball rolling in 2008 by dumping the Left parties and going back on the UPA-I’s assurance to them on the Indo-US Nuclear Deal. The UPA-I traded principled allies for opportunistic vote-hawkers to survive its July 2008 trust vote. From that point on, ally management has been a portfolio held by the Congress’ dirty tricks department.

Coalition partners had become important, briefly, in the pre-Rahul Gandhi era of Congress politics after the party realised it could not regain power at the Centre on its own. In its Panchmarhi resolution of 1998, the party had rejected the option of ruling in a coalition. It wanted exclusive power, and this kept it away from Parliament’s treasury benches for longer than it expected. The 1999 general election saw the BJP-led NDA return to power. By the time the next all-India polls approached, the Congress had reconciled to coalition politics as the only way to wrest power back from the BJP and its allies. In 2003, the party’s conclave in Shimla ended on a less arrogant note. Its Shimla Sankalp (resolution) concluded: ‘The Indian National Congress fought for Independence and secured it for our people. We must now fight to preserve it and its time-tested values in their truest form. Our unshakeable commitment is to the politics of principles, to democracy, secularism, economic growth and social empowerment. We now seek the support of the people to bring India back on the path of Progress with Congress under the leadership of Smt Sonia Gandhi. We invite all progressive-thinking men and women, institutions and political movements who share our understanding of India’s past, our concerns with India’s present and our vision of India’s future to join us in this historic endeavour.’

Aided by the wily Harkishen Singh Surjeet of the CPM, the Congress forged an alliance of secular parties and won power at the Centre in 2004. At the Hyderabad plenary of the Congress in 2006, the Congress reiterated its commitment to coalition politics. The 2009 general election brought the UPA back to power, but the Congress’ gain in seats spelt an exponential increase in its arrogance. Contrast the party’s 2006 attitude with its resolve at the 2010 plenary held in New Delhi: ‘The necessity of coalition politics at the central level does not prevent our state-level workers from hoping and dreaming of a larger political space wherever they may be and we as a party must be cognisant and supportive of their aspirations…The Congress has shown itself adept at adjusting to the ground realities of coalition politics. The Congress remains dedicated to restoring the primacy of the Party at the Centre and in all states.’

The BJP says it will not try to topple the current dispensation, but wait for the UPA Government to collapse under its own weight. The current state of the NDA is a good reason for the BJP’s restraint. It has few other options anyway, given that its own coalition management is far from satisfactory. The NDA is no longer the large group it was when Atal Bihari Vajpayee was Prime Minister. What remains of the NDA is the BJP and a few allies like the Janata Dal (United) in Bihar, Shiv Sena in Maharashtra and Shiromani Akali Dal in Punjab. In Bihar, where it is the junior alliance partner in the JD-U-led state government, the BJP’s relationship with its ally can at best be described as strained.

Bihar Chief Minister Nitish Kumar’s show of strength at his Adhikar rally in New Delhi last Sunday has left the BJP uneasy for good reason. On the face of it, Kumar’s rally was held to demand ‘special status’ of the Centre for the state. On Monday, Kumar followed it up with meetings with Planning Commission Deputy Chief Montek Singh Ahluwalia and later Prime Minister Manmohan Singh. Kumar’s rally was a message both to the BJP and Congress that the JD-U is willing to partner whichever party grants it what it wants. “Either you give it now or after 2014… you will have to give it,” Kumar announced from the dais, referring to his ‘special status’ call. “You will have to accept the demand, given the circumstances that will prevail after 2014. Only one who feels for backwards and backward states will [get to] occupy the seat of power in Delhi. We do not have to look either to the left or the right. We have to look straight. The Government in Delhi should be one that looks after our interests,” Kumar said, making it clear his party was out for a bargain.

Notably, Kumar has always taken a hard stance against the BJP’s poster boy Narendra Modi. In fact, Bihar’s CM rarely misses an opportunity to show his contempt for Gujarat’s CM. “We will leave everyone behind…There is talk of a development model these days. We will present [Bihar’s] model to the world. This is a model under which everybody is taken along. This is the real development model for India,” Kumar declared, directing a barb at Modi, whose recent visits to New Delhi have been focused on tomtoming his ‘Gujarat model’.

Even as Kumar occupied Delhi with thousands of his supporters, back in Patna the BJP held a state executive meeting that was boycotted by a few state ministers. Bihar’s Deputy Chief Minister Sushil Kumar Modi, often criticised within the state unit for his pro-Nitish Kumar leanings, made a turnaround in the face of his party’s misgivings and said the BJP state unit would contest the next Lok Sabha election “under the leadership of Narendra Modi if the party decides so”. For good measure, the deputy CM issued Kumar a warning: “The Congress has become a sinking ship and those ready to ride it will sink automatically.”

Evidently, the BJP has been throwing its weight behind Modi at the cost of alliance possibilities. With ever more regional outfits ready to dump old partners for new bargains, the BJP’s rigidity in supporting Modi’s candidacy for the top job will only make it tougher for it to convert Congress losses into gains for itself. The Shiv Sena too has reservations about Modi’s candidacy. The late Bal Thackeray, the party recently said, had given Sushma Swaraj his approval as the NDA’s candidate for the PM’s post. The alliance with the SAD in Punjab, where it runs the government, is another opportunistic arrangement that is unlikely to outlast the octogenarian Chief Minister Parkash Singh Badal. Deputy Chief Minister Sukhbir Singh Badal’s contempt for the BJP is no secret, and he wants to turn the SAD into a party that doesn’t rely only on rural Sikh support for victory. He is working at it, and this is not good news for its ally.