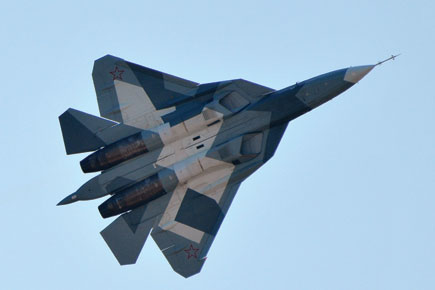 
ZHUKOVSKY, RUSSIA ~ There was major embarrassment for Sukhoi Corporation at the recently concluded 10th International Aviation and Space Salon MAKS 2011 air show. The starboard engine of the Russian fifth generation fighter, called the PAK-FA/T-50 (Perspective Airborne Complex of Frontline Aviation) flamed out, forcing the pilot to abort the flight, in front of about 200,000 visitors. The incident took place on 17 August at the Ramenskoye airfield, Zhukovsky, Russia. Also present was the top brass of Hindustan Aeronautics Limited (HAL), the Indian partner in an arrangement that is the most expensive Indian defence deal till date.

The Russian PAK-FA, also called T-50 prototype, is a twin-engine, single-seat stealth fighter and has a range of 5,500 km. It is designed to compete with the F-22 Raptor of the US, so far the only world’s fifth-generation fighter, and the F-35 Lightning II, now under production.

The Indian version will come up for flight certification after 2,500 hours of flying, to be completed in 25 months—which would be around the first half of 2013. The initial contract was for $11 billion, signed between India and Russia in December 2010 in Delhi. Equally divided between both countries, it included the cost of flight testing, infrastructure and design and development over 10 years. Each aircraft would cost $100 million, taking the deal value to $30 billion.

The Indian and Russian versions of the aircraft will be similar. The Indian FGFA will also have an AESA (active electronically scanned array) radar.

The accident may not impact the New Delhi-Moscow joint venture, but the message was clear. It highlighted the concerns of the Russian Air Force, which wants a more advanced engine for this aircraft, currently flying with an upgraded Sukhoi-30 engine.

HAL Chairman Ashok Nayak says, “Right now the PAK-FA is flying with an upgraded Sukhoi-30 engine, and it is likely to have its own new engine by 2018. The detailed design contract of the Indo-Russian FGFA (fifth generation fighter aircraft) programme will be concluded soon. The initial contract came into effect in February 2011, and would take 18 months. The Indian version would be a twin-seater, unlike the Russian one, but would have the basic design frame of the T-50. Certain equipment specific to the IAF’s requirements will be fitted onboard.”

According to the Sukhoi Director General Mikhail Pogosyan, the two flying prototypes do not carry a complete set of avionics and systems, like the radar suite. The third operable prototype, likely to fly by this year end, will have the radar suite, and the firing tests will begin early next year. Serial production of the PAK-FA, intended to replace the Russian Air Force’s Su-27 fighters, is expected to begin after 2016, after the completion of tests. The initial order is for 50 aircraft.

The third prototype will have the Tikhomirov’s NIIP radar suite, which will include the AESA unveiled at the MAKS-2009 show. Sukhoi officials claim that the PAK-FA’s radar signature will be similar to that of the American F-22A Raptor—the fifth generation fighter that everyone is chasing. Doubts were expressed about the absorption of the electromagnetic waves’ coatings on the airframe of the second prototype of the T-50.

The T-50 prototype is named after its trapezoid shape, and is likely to be called a Su-50 after its induction. Its current power plant is the Item 117 engine, made by NPO Saturn. But this is a temporary solution. While NPO and MMPP Salut are competing to win the engine contract, it’s still not clear if the Russian defence ministry will release funds for developing a better engine or continue with the current cheaper alternative.

The Chinese fifth generation, J-20, has already made two test flights, and hopes to go into production by 2017, while the Indian FGFA is expected to make its first flight in 2017, most likely with an existing Sukhoi engine. The Russian PAK-FA has uncertainties over its power-plant, and hopes to go into production with the existing upgraded Sukhoi engine, while a new engine would enter testing phase only in 2018, pushing the programme further back. This explains the Indian FGFA’s likely delay.