He helps disadvantaged students succeed in a competitive world 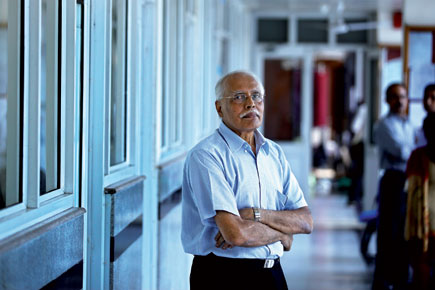 Tall, spectacled, and slightly grandfatherly, Professor DD Nampoothiri, executive director of Crest—Centre for Research and Education for Social Transformation—meets you like an old friend. A professor of Sociology and member of the Regional Steering Group (South Asia) of Global Partnership for Prevention of Armed Conflicts, Nampoothiri has been associated with social work in India, particularly for children of disadvantaged backgrounds, since 1998. “The children I work with have perhaps never had the chance to speak up; they have always been made to feel conscious of where they belong. These students [mostly from disadvantaged segments of society] are usually diffident and shy. Many of them attend school, but the environment at institutes of higher education leaves little room for introverted children, especially in engineering colleges—where the emphasis on peer level interaction is a lot more.” His work with Crest aims to change this by equipping students with the skill sets needed for social inclusion.

An autonomous institution under the government of Kerala, Crest is based in Calicut. In its earlier avatar, it was the Centre of Excellence, which was incubated by the Indian Institute of Management, Kozhikode, in 2002. It has been an autonomous institution since 2008, and continues to receive support from the Scheduled Castes and Scheduled Tribes Development Department, Government of Kerala. Today the organisation holds regular workshops for almost 50 engineering colleges in Kerala, and has been conceived as a national institute of humanities, science and professional studies, addressing the needs of Dalits, Adivasis and other marginalised communities of India. For now, it is the only institution doing any research in this field.

There’s a sense of pride written on his face when Nampoothiri explains the workings of the flagship programme at Crest, which is a Post Graduate Certificate Course for Professional Development. Students enrol for this course once their primary degree is over. The students could be from any professional or education background, which could range from a BTech to a basic graduation degree. The certificate programme works as a module to prepare the students for their actual professional phase. “Most of the candidates are trainees working in the corporate sector—and these places have no reservation, you see. Also, you can easily spot these students, for they’re always shy and diffident, always occupying the last bench, slouching, almost never participating in any discussion. We’re attempting to change that by training them with English communication skill sets, where the trainer makes it a point to meet and interact regularly with the students,” he says, adding that a college environment is the best platform to use and build upon this diversity. “In today’s age, adolescence is very important. While some students are open-minded, others take some time to open up and get used to a big city environment, or being away from their homes for the first time,” Nampoothiri explains, like he would perhaps to one of his students. “The advantage and beauty of India’s rich diversity is that there are people of different societies and backgrounds living with each other.”

For their flagship programme, students make weekly presentations on topics that interest them—these vary from menstruation and how it affects women to the problems faced by the transgender community. The advantage is that students receive feedback and comments from experts. In addition, they too perform a play at the end. Some of these students have gone on to become CEOs of local companies. “Theatre is a wonderful programme, which allows all your skills to be transformed and prepares students for all types of competitive tests,” says Nampoothiri. While there are more females enrolling for these programmes, a sizeable section is now opting for a career, as opposed to doing nothing about the skills they acquired. The glint in his eyes is obvious when he recalls how the students he’s trained always come back. “They always keep in touch.”

His team recently concluded a ten-day workshop at AIIMs for 70 odd first-year students. Conducted on an annual basis, the first day is known as ‘the ice-breaker’, where it’s just about getting the students to talk to one another. They’re made to introduce themselves and where they’re from: which has to be then repeated by every student of the batch. “This way, they perhaps learn of villages and towns they’d never heard of earlier,” says Nampoothiri. The next three days are focused solely on communicating with each other and also personality development. Students are constantly encouraged to speak. Predictably, at first, some are reluctant, for they are conscious of their weak English-speaking skills. However, when they see their classmates come up and speak even if it’s in-correct English, they feel they too can overcome their complexes. Ordinary speakers eventually pick up, buoyed by the feeling that they too can make mistakes but need not be bogged down by it. Similarly, there are Hindi-speaking classes for those who’re weak in the language. After five days, theatre takes centre stage, where students are involved in basic life skills, such as learning to work together, decision-making, problem-solving, etcetera. The plays they enact are usually scripted, enacted and directed by the students themselves, aided by faculty from the National School of Drama. The group in the room during our interview is rehearsing a play on what appears to be eve-teasing.

Nampoothiri talks with the tone of a content parent about the success stories of students that Crest has helped nurture. “One such student is now working in Silicon Valley, California—something which she says she owes to the institution. By the time the students finish [any of the various courses that Crest conducts], they’re completely different individuals,” he says. There’s a one-month intensive in-house orientation programme for students who obtain admission for BTech degree courses. Throughout the duration of the course, students are given mentoring support to improve their performance level. “We realised that what we want to achieve cannot be finished in 7-10 days. So we devised a programme for the faculty—where there will be a group of mentors with three to four mentees. This way, it’s easier to incorporate and achieve social inclusion,” he says.

An encouraging aspect is that none of the students or their parents really care much for caste or class divides—this could be because getting into an institution of national repute is itself a big achievement, and even the parents are of a generation that wants its kids to go far and beyond. They want their children to be better placed socially. Nampoothiri also gives credit to the advent of social media and smartphones, which has made information far more accessible and students more aware of what’s happening around them. “We conduct regular, monthly reviews for the faculty as well. However, a lot more awareness is required to achieve what we’re setting out to do.”

From the feedback that Nampoothiri and his team have received, and from his own observations, because of their skill training, students are now attending classes on a regular basis and their performance levels have also gone up. “Similar programmes are conducted in other societies as well. Take for instance, University of Michigan, which conducts a one-two week programme for students of the Latin- American and African-American community to prepare them for interaction with other students,” he says. “Every student’s competitive skills have to be at par with the rest, regardless of whether they pursue a course in engineering, medicine or agriculture. One of the biggest problems that students face is cultural change. They feel that they’re brilliant, having made it to a reputed institute, or perhaps being the only person in their entire family or village to ever make it to university. However, when they reach their dream college, they meet other equally brilliant students. This leads them to feel they’re maybe not as good as they’d thought,” he says. Such students require regular counselling, which Crest enables.

The organisation will soon train students at the school level. It has shortlisted schools in 10 districts in Calicut, all of which are exclusively for students of disadvantaged backgrounds. “We hope to train a number of students and teachers through this programme. Intervention at the right stage and right level can have far-reaching effects,” says Nampoothiri.

Crest also has a placement cell for students who complete their certificate course that advises and supports them for higher studies and employment opportunities. In addition, it conducts regular workshops on job opportunities and higher education with the support of the British Council and the United States-India Educational Foundation (USIEF).

Nampoothiri is optimistic about the future of Crest and its goals. The institute is working to become self-sufficient by 2016, by when it will shift into its own campus in Kerala. It is also looking to set up a research wing, which will continue to look at problems of social exclusion. “The right faculty with the right mindset can really do miracles. Teachers have to realise that students from disadvantaged backgrounds have been at the receiving end for years, and it is now their job to help improve their skill sets,” he concludes.