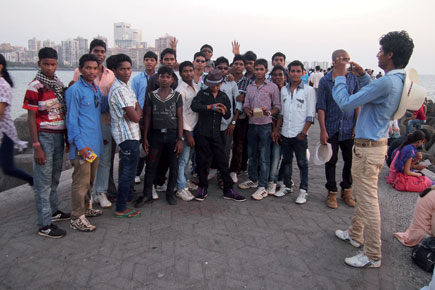 
The sea spray splashed on board and they steadied to take a picture. ‘India Gate’ was fading. So was ‘Hotel Number 1’. The boat was moving fast, too fast. “You see, it has an engine, like trucks,” a tall scrawny boy explained to a younger one, Magan Podiyami. “It is not your village donga (canoe).” Earlier, while stepping onto the boat, Magan had been reassured that “the sea is nothing but a giant pond.”

It was the last day of April. The clear blue summer sky met Mumbai’s muddy waters off the coast fringed by the Gateway of India and Taj Mahal Hotel.

The boys, 20 of them, were on their way to Elephanta Caves atop an island thronged by tourists. That morning, they had alighted from the Jnaneshwari Express after a 20-hour train journey from Raipur, preceded by a day-long bus ride from Sukma and Bijapur, troubled districts in Chhattisgarh’s far south. All along their journey they had been accompanied by a sub-inspector of the Central Reserve Police Force (CRPF), India’s paramilitary force which has long been engaged in counter-insurgency operations against Maoist guerillas, and which was now sponsoring the boys’ trip and hosting them as part of its ‘civic action programme’. Limited in the past to distribution of medicines, clothes and utensils, the programme has made an ambitious leap this year, bringing school boys from Chhattisgarh to distant cities.

Magan, a shy eighth-grader, couldn’t believe his luck. This was the first time he had sat in a train or seen the sea. For that matter, this was the first time he had stepped out of his home district, Bijapur. His village lay inside a dense forest where Tribals saw CRPF men in a menacing light. But now, with a uniform-clad soldier calling him ‘beta’, and warning him in a gentle voice not to lean over the railing of the boat, Magan wondered if the village people had got things wrong.

And yet, less than 20 days later in a village called Edasmeta, not far from Magan’s own, CRPF soldiers would gun down eight people, including three children.

The disputed events of 17 May read similar to the Sarkeguda incident last June, when CRPF soldiers fired on and killed 17 people. The CRPF claimed they were Maoists, but among the blood- spattered bodies, five dead children lay for all to see. Much like Sarkeguda, in Edasmeta, the CRPF says its soldiers simply responded to fire initiated by Maoists, losing one man in the exchange.

But over the next few days, villagers would tell reporters that they had gathered to celebrate Bija Pandum, a seed festival that marks the start of the sowing season, and that the CRPF soldiers had burst into the village and opened fire; there had been no Maoist presence, and as for the dead soldier, he was a victim of ‘friendly fire’ from his own colleagues.

The dispute over how would not change what had happened: three children had died for no fault of theirs.

For the CRPF, the Edasmeta killings are a setback to its careful plans to win people over and woo the youth in Chhattisgarh’s Bastar region. Keen to shift its image from a ‘hostile’ force to a ‘friendly’ force, the CRPF has scaled up its ‘civic action’ . Every other week, somewhere in the conflict-ravaged south of the state, you could see the incongruous sight of weapon-wielding soldiers handling saris, lungis, utensils, medicines and solar torches. Zulfiquar Hasan, the Inspector-General who headed the CRPF in Chhattisgarh, kept watch from his office in Raipur and would often land up to personally supervise such events.

One day in the last week of March, in Palnar village in Dantewada, men cheered lustily as women kicked up a cloud of dust. It was a tug-of-war. The women from Bazarpara, a market hamlet, eventually won. Hasan handed them a trophy and also gave out whole stacks of saris.

M Dhinakaran, the commandant of the 111 Battalion, which had organised the event, later joked, “Earlier, women would hesitate to take saris from us, but now they come and demand a specific colour.” Over the last six months, Dhinakaran’s men have set up computer training centres, organised tele-medicine camps—with specialist doctors attending to patients over the internet—and even started a bus service. The emphasis on ‘civic action’ has been so strong, that efforts have been made to reach even those villages deep inside Maoist territory, where the rebel presence rules out any attempt to pitch a shamiana, let alone invite crowds. Last November, in the dead of pre-dawn, the residents of Morpalli village were woken rudely by soldiers. In 2007, homes in that village had been burnt down by the Salwa Judum, the state-backed anti-Maoist militia. In 2011, the Judum men, by then drafted into the state police, did an encore. Having lost their homes twice, the villagers lived in intense fear. So when they found themselves being herded by soldiers and marched 12 km to a CRPF camp, they expected the worst. What awaited them was unprecedented: three high-powered solar lamps, three kits of volleyball, and three footballs.

Football is the latest tool against Chhattisgarh’s Maoists in the CRPF’s arsenal. Unlike in Jharkhand and Bengal, where tribal communities are familiar with the game, the sport is new in this state. Most of the young boys who came to play in the tournament organised by the CRPF in February were playing it for the first time.

Jogesh changed into a blue and yellow jersey, pulled up socks striped with the same colours, and slipped his feet into spiked shoes—all supplied by the CRPF. His teacher bent to help him tie the laces. “Remember, all you have to do is run,” the teacher said. “If all of you ran every minute, we would win the game.” A few more instructions later, the boys were in the field, a newly laid grassy cricket ground. Whatever else they did, they ran for sure, winning the game 2-1.

Jogesh’s team from Nahadi ashramshala —the residential school of Nahadi village—was one of 20 teams that competed in Dantewada district between 18 and 20 February. Five other districts in the Bastar region hosted their own tournaments. By the following week, when the winning teams converged to play the finals in Dantewada, about 1,800 boys from the region, aged 12-19 years, had seen CRPF soldiers up close and personal, not in their avatars as soldiers, but as harmless cooks, coaches, drivers and referees.

The attempt to drive home a positive association did not end there. The tournament was held in the memory of Gundadhur, a Tribal leader who led the Bhoomkal rebellion of 1910, an Adivasi revolt against the British that Maoists commemorate every year. “We wanted to say, ‘Gundadhur belongs to everybody, not just the Maoists. He is an Indian hero, he fought the British,’” explained Inspector General Zulfiquar Hasan. The attempt to appropriate an icon was clever thinking. Asked who Gundadhur was, a couple of class eight boys from the Nahadi village school responded: “Must be someone from the CRPF.”

During the closing ceremony, Hasan and his colleagues from the CRPF gave out a mountain of awards: trophies, cash prizes of Rs 2 lakh, and more than 80 mobile phones to individual players who performed well. The team from Nahadi had crashed out of the tournament early, losing its second match. But it still won a major prize: a 32-inch LCD TV. A solar panel and satellite dish were also given away. The calculation, one officer explained, was that villages like Nahadi lay inside Maoist territory, and “if people in such villages could see how the rest of the world lived, they would kick out the Maoists.” It was this same thought that made the CRPF organise ‘Bharat Darshan’, sending off batches of 20 players to Delhi, Kolkata, Hyderabad, Visakhapatnam and Mumbai.

“Oh, look what’s here!” the boys squealed in delight as they spotted a rat in a tree trunk not far from the Gateway of India. After a day of heady newness, a familiar sight was welcome. From the moment their bus had driven out of the CRPF campus in Navi Mumbai—after a breakfast of chhole bhature, which they had tasted for the first time—the boys had been in a photo frenzy. Everything seemed worth a picture: the high-rises, the roads, the crush of cars.

“Don’t overshoot,” warned Narendra, one of the older boys. “The phone memory will be over even before you get to see Shah Rukh Khan.” Earlier that morning, they had been addressed by smartly-dressed CRPF officers seated around a conference table. Commandant Gaurav Singh had welcomed them and told them they would be taken to see the homes of filmstars: Shah Rukh, Amitabh Bachchan, Salman Khan. If they were lucky, he had added, they might even catch a glimpse of their favourite star.

“Is there anyone else you’d like to see?” Singh had asked.

“Katrina,” a boy had said feebly.

They didn’t get to see Katrina. But they did see Shah Rukh Khan—giant-sized, on billboards. At the end of the day, Dilip Madavi, a tenth-grader, couldn’t contain his excitement. “Football gol gol ghooma raha hai (Football is taking us places),” he said. And what did they think of the CRPF? “Achche hain (They are good),” he said. Would they face trouble back home if the dada log knew they had stayed with the CRPF? “If they ask, we’ll say all we did was play football.”

How does a rebel group counter an offensive that comes concealed in a football? In March this year, Maoists held a meeting in Morpalli village. Men, women and children sat cross-legged under the shade of a tamarind tree, while the commander, a woman, stood upright, her hands folded behind her back. “Now they are coming and giving you stuff,” she said, speaking in Gondi, the language of the region’s Tribals. “Where were they all this while?”

“It has been three years since your homes were burnt. Has any policeman been punished?” she asked, reeling off the names of several other villages that had been targeted by security forces where, she said, ordinary people had been beaten or killed, women raped, and home scorched. At the end of the roll call, she named Sarkeguda, the village in Bijapur where the CRPF shot 17 people dead last year.

“The government is being run by those who are growing rich at your expense. They loot your wealth and live in cities and travel in gaadi-ghoda (fancy automobiles). They are not going to give you much,” she continued. “We will not accept their gifts. We will fight them,” she said, turning to the women. “Right, sisters?”

The women stayed quiet. A few moments passed. The commander made a few more exhortations, turned to the men and asked again. Finally, there was an answer. “You are right,” a man said, and a gentle buzz of voices broke out in support.

“When I return from an operation, I struggle to sleep. I feel depressed. I ask myself, ‘Who am I fighting?’ That poor man,” says a CRPF officer, speaking on condition of anonymity.

“I feel confused. But then, this is the nature of Naxalism. It is no ordinary problem…Look, even the PM is confused.” In public conversations, CRPF officers love to ridicule Arundhati Roy and her ‘tribe of misguided intellectuals’, but in their private spaces, they admit to being assailed by doubt. Many think back to the history and politics they studied in college—some had attended Jawaharlal Nehru University, the hub of the Indian left. Those not given to intellectual debates still have to deal with their emotional responses.

In the morally fraught world of the Maoist conflict, where a soldier may perchance kill a child, the saris and footballs seem to mean more to those who give them than to those who take.