Can You Do It?

Today it is all about skill development 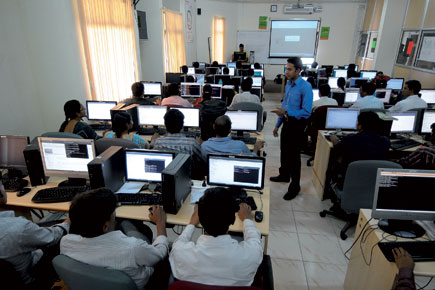 Aravindh Kishore, 23, is spoilt for choice. An electronics and communications engineer from Bangalore, he has two job offers from India’s largest infotech companies, and the promise of another from a big data startup. “I cannot decide. I may just pick the one with the best cafeteria,” he jokes. As a student, Kishore had to face graver uncertainties. His college in Hubli, affiliated to Visvesvaraya Technological University, wasn’t exactly the breeding ground for knowledge that the brochure had advertised in bold lettering. At the end of four years of uninspiring canteen food and sub-par teaching, Kishore found himself none the wiser. The fundamentals of Boolean algebra and vector calculus continued to elude him. “My math and logic skills were weak and when I approached professors for help, they would give me a book to read and ask me to mug up some theory that I could vomit out in the exam,” he says. “I regretted my decision to be an engineer.”

The fog of ineptitude did not leave Kishore even after graduation. “Had I got a job, I would have been unprepared for it. I decided to take a year off to study, to become a real engineer,” he says. His journey began with signing up for a nine-week, four-module introduction to electronics on Coursera.com, which offers free virtual access to structured course material from the top universities of the world. Kishore went on to study JavaScript, web interfaces and data science, acquiring skills that left his interviewers impressed. “More than half of my batchmates are unemployed. Some of them have become technicians, earning about Rs 10,000-15,000 a month,” says Kishore. He is not alone in the realisation that most engineering colleges in India promise more than they deliver.

For many years now, India has worried about sinking into a talent-less dystopia. Surveys constantly hit us with the truism that less than a quarter of the 1.2 million engineers who graduate every year are employable. Several initiatives have there- fore cropped up to groom a generation of smarter engineers for job roles defined by the National Skill Development Corporation (NSDC) through NASSCOM, its sector skill council body for infotech and services enabled by it. The chorus is now gaining in tempo, including in its ambit soft skills and teacher training.

For the past year and a half, Ashok Jhunjhunwala, a professor in the Depart- ment of Electrical Engineering, Indian Institute of Technology-Madras, has been overseeing an initiative under the Quality Enhancement in Engineering Education (QEEE) programme of the Department of Higher Education, Ministry of HRD. As part of this effort, top-rated professors at the IITs conduct live, interactive video classes that 135 engineering institutes across the country can tune into. “We cover about 22-25 modules in a semester. The idea is to give students access to a high-quality teaching approach, so we select only the best professors from the IITs to conduct these sessions,” says Jhunjhunwala. While reaching thousands of students has been a rewarding experience, Jhunjhunwala says larger bodies must now emulate the initiative so it can scale up quickly.

Anxious to build a talent pool, corporates and educationists have, meanwhile, begun to stage interventions in the system. Back in 2008, Uma Ganesh, former head of education at NIIT and Aptech, and her husband Ganesh Natarajan, Vice-Chairman and CEO of Zensar Technologies, set up one of the first businesses in skilling engineering graduates and undergraduates. Now, Global Talent Track (GTT) trains over 15,000 students a year from 2,000 colleges and works closely with most big employers in the infotech sector. The company intervenes at the college level to brush up participants’ technical and soft skills and assesses how far they are from industry expectations. In a more intensive, hiring-driven model, GTT also recruits batches of freshers in association with a corporate to train them for specific job roles. Candidates go through a tailored training programme for up to three months and most of them are then absorbed into the company that commissioned the skilling exercise.

In the summer of 2013, Sriraman Sukumaran, now a software engineer with Hexaware, Chennai, graduated from an Anna University-affiliated college. Attending the three-month work-readiness programme ahead of placement season, he thought, was preparation enough. But after clearing many rounds of off-campus interviews at Hexaware— he was among the 40 candidates picked from a pool of about 1,900—Sukumaran was asked to attend a training course by GTT in Perungudi. “It was then that I realised college education hadn’t prepared me for work. There hadn’t been any real opportunities to code on my own. I lacked in several technical skills, which were brushed up in the course of the training,” he says. Under this model, over 90 per cent of candidates trained by GTT are absorbed by corporates.

Corporate involvement in skill-building is growing steadily, says Deepak Chenoy, MD and CEO, NSDC. The NSDC supports and funds companies with a scalable, sustainable business model that ensures employability of the candidates trained. “We are now supporting 187 training organisations to scale up. Four or five years ago, none of them existed,” says Chenoy. “This academic year, they will train a few million people.” A new NSDC report, he says, reveals that corporates not only prefer to hire graduates trained by these organisations, but are also paying them more.

Zensar is among the IT companies to have pioneered a skill development programme under the umbrella of its CSR initiatives. In its second year, the programme, offered to third- and fourth- year students in Tier 2 and Tier 3 cities, has a 280-hour curriculum covering soft skills and technology. About 30 per cent of students trained are hired by Zensar, while the rest are absorbed by industry. “There is a huge opportunity here. We can significantly improve the efficiency curve at the workplace,” says Uma Ganesh. In the next few years, the IT industry’s focus will shift to innovation and thought leadership, she says. “Coding will be a given, a necessary skill. As more data-driven solutions are built, analytical abilities will become important.”

Another venture in the skilling sector, Hyderabad-headquartered TalentSprint, is scaling up rapidly. It is about to hit the 5 million mark on Facebook and is launching a YouTube channel. Working in the IT and banking sectors for five years—school teachers are a recent addition—TalentSprint grooms middle- of-the-pyramid talent in technical and soft skills, including for the dreaded aptitude tests. TalentSprint’s 400-hour flagship programme, spread over 12 weeks, is among the most expensive at Rs 45,000. Yet, come May, its 12 centres in south India witness a tsunami-like wave of students signing up. “The big question in education is who should pay for skills. It depends on the skill. If the job has an aspirational element to it, it is the trainee who should pay,” says Santanu Paul, CEO, TalentSprint. “We package our courses as consumer products. Most of our new customers come through referrals.”

Paul wants to train a million young people by 2020. “Only 10 per cent of all graduates are work-ready. But with some training, a majority stand a decent chance of getting hired,” he says. TalentSprint, which has raised several rounds of capital since 2012, offers 12-month placement assistance to trainees. About 70 per cent of them get hired after the training. Infotech giants like Capgemini, but equally, startups and small tech companies, regularly shop from TalentSprint’s talent pool. “We are increasingly moving online. Now, about half our course material is delivered online. Going forward, this ratio may go up to 80:20,” Paul says.

Skilling is often to do with putting the fun back in learning, says Surga Thilakan, a former investment banker who teamed up with fellow-IIM-A alumnus Sreeram Vaidyanathan to found iSTAR, a Bangalore-based, United Seed Fund-backed company that develops training modules for students of banking and engineering and incorporates them into the college curriculum. “At IIM-A, I discovered education could be fun and engaging. At iSTAR, too, we follow a participative pedagogy, incorporating elements of gaming—we have a team of game designers and graphic artists who do that—and recreating real-world scenarios,” Thilakan says. iSTAR sets up skill labs at colleges and monitors students’ progress from the first to the last semester. “We take up math, logic and basic computer skills that everyone must have,” Thilakan says. The company is present in 150 colleges in south India and hopes to train 10,000 students this year. It also offers full-fledged UGC- approved courses in upcoming subjects like data analytics, with much of the course material available online.

There are parallel efforts to help train faculty, including the Indo-US Collaboration for Engineering Education (IUCEE), an interactive forum. “The best talent typically flocks to the corporate world and to premier institutes, and other colleges end up hiring incompetent teachers who come cheap,” notes TV Mohandas Pai, Chairman, Manipal Global Education. For teachers who want to upskill themselves, Professor Deepak Phatak of the Department of Computer Science and Engineering, IIT-Bombay, spearheads a landmark online workshop project. Participating teachers attend live video workshops, on courses like electronics and computer programming, conducted by IIT faculty. Tens of thousands of faculty have been trained under this MHRD- funded initiative. The ministry also has a quality improvement grant for technical education, but institutions have been found to be utilising the money largely for upgrading physical infrastructure.

Then there are the technically proficient who need coaching in the ways of the world. Kalpesh Nawandar was always academically oriented. That is how he got into energy science and engineering at IIT-Bombay. But once there, the boy from Nasik found himself confused about career choices. “I could not articulate my thoughts well. And for someone who wants to set up a business one day, that was a big worry,” he says. When a flyer on the noticeboard advertised a course in soft skills, Nawandar jumped at the opportunity. After six modules on self- awareness, goal-setting and communication skills, Nawandar says he is a changed man. “Your college cannot teach you everything, not even if it is an IIT,” he says. “I am more focused and confident of entering the corporate world now.”

The programme Nawandar went through was devised and conducted by Talerang, a startup by Harvard Business School alumnus Shveta Raina. “I was always puzzled at students who graduated from good colleges but ended up without a job,” says Raina, 29, who launched Talerang in October 2013. “My research for Harvard showed that this was a big problem, but a solveable one.” Talerang imparts training in soft skills to students from top colleges and guarantees them an apprenticeship with a corporate. “Seventy-seven per cent of students quit their first jobs in less than a year. Clearly, they don’t know what they want to do. In an age when engineers are becoming bankers and students of the arts can turn real estate agents, we try to prepare them for a multi-functional role,” Raina says. Since most students of engineering are first-generation collegiates, they need mentorship and advice more than anyone else, she says. Talerang has trained 2,000 students and has 50 corporate partners, including banks, tech and media companies. The course costs Rs 15,000, which is returned to the student in the course of the internship. “The quarter- life crisis is the biggest crisis in one’s life today,” Raina says. “And if someone helps you sail through it, you will be a better engineer—and a better person.”