In what could be the largest family in the world, men live with dozens of wives and scores of children, and all survive in enviable peace. 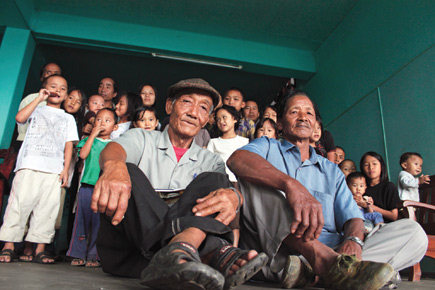 In what could be the largest family in the world, men live with dozens of wives and scores of children, and all survive in enviable peace.


Ziona has his hands full. Not only with his 38 wives and 94 children, some of whom have their own families, but also with playing ‘father’ to 3,500 other families that belong to the Christian sect he leads in the hill state of Mizoram. This head of the Chana sect, named after his father Challian Chana who founded it in 1942, lives in a massive four-storied house—two more floors are under construction to accommodate the growing family—at Baktawng-Tlangnuam village, about 100 km southeast of state capital Aizawl.  Ziona stays here with his 169-member family, making it the largest joint family in the world.

But this is just one among the many things that make this family, its mores, the village and the sect unique. The sect is actually like one huge extended family that believes in equality, practises socialism, and lives like one big commune. They’re known for their enterprise, hard work, simplicity and honesty all over the state. About 300 families belonging to the sect stay at this village, while the rest are dispersed all over Mizoram.

It all started at Hmawngkawn village, about 60 km north of Baktawng-Tlangnuam, more than 70 years ago. Khuanga, Chana’s elder brother, started a Christian revival movement at Hmawngkawn. “Pu (an honorific in Mizo) Khuanga’s idea was to make religion more meaningful and put into practice the teachings of the Gospel. He died in 1941 and Pu Chana took over and gave the movement a concrete shape. He laid down the tenets of our sect and formally announced the formation of Chana Pawl (Group of Chana) on 12 June 1942,” says C Lalrinthanga, a spokesperson of the sect.

There isn’t any doctrinal difference between the Chana Pawl sect and other Protestant denominations like the Presbyterians. “Where we differ is putting into practice what the Gospel tells us, like charity, hard work, honesty, helping thy neighbours, simplicity and equality. We also have a very strong Mizo influence in everything we do, unlike other churches where Mizo cultural practices have made way for Western-style rituals,” says Lalrinthanga, a former bank officer from Aizawl who took voluntary retirement three years ago to join the sect and settle down in this picturesque village nestled in these cloud-kissed verdant hills.

Chana and his followers—20 families in all—were banished from Hmawngkawn village after the formation of the sect, and they journeyed through thick forests to settle down where this village stands today. Everything was built from scratch. “This was all dense jungle. We had to clear the land, build houses and roads, develop small plots for farming, source water from nearby streams. Life was very tough and it was a hand-to-mouth existence. But we were happy and contented,” says L Rinliana, who was 10 when he came here.

The settlers soon realised that agriculture alone couldn’t sustain them. “The hills are steep and there’s very little flat land for cultivation. So we had to think of some alternatives. Pu Chana then suggested we employ our existing skills in making furniture [many of the original settlers were carpenters]. Good wood was plentiful and we started making furniture for neighbouring villages. After some years, we started making aluminium utensils also,” recalls Upa Chalnguanga, 73.

Today, Baktawng’s utensils are famous for their high quality and superior finish not only in Mizoram, but also in many neighbouring states where they’re sold. This village also supplies furniture, including door and window frames, to the entire state. “Carpentry and making aluminium utensils are the mainstay of our economy now,” says Lalrinthanga. Every household in this village has a small furniture or aluminium workshop.

Except that of the head of the sect. The sprawling pale purple mansion, the only concrete structure in the village apart from the sect’s church, has no space, nor time, for such trades. There are just too many chores to be done at this house. The kitchen fires burn from early

morning to evening, and a constant trail of children, adolescents, adults and elders stream in and out of the open kitchen that’s managed by the womenfolk by turns.

The mansion, named Chhuanthar Run (House of the New Generation), has four generations dwelling in it in complete harmony. Every married couple gets a private room or cubicle, while the

children and young unmarried adults stay in huge dormitories. Surprisingly, no family member can cite the exact count of the number of rooms or cubicles—there is one being made or dismantled every other day!

Apart from a few of Chana’s surviving wives—he had many, but amazingly, none knows the exact number—and some of their children, most of those who reside in this house are Ziona’s wives and their children and grandchildren.

Ziona knows each member of the house, and the entire village as well as most of his followers (an estimated 35,000) by name. Ziona, the eldest son of Chana’s senior-most wife, was anointed head of the sect before Chana passed away on 27 February 1997, aged 87.

“There are no disputes or disagreements in this house or in our sect. That’s because everybody adheres to rules laid down by Pu Chana and has imbibed the values of charity, understanding and forgiveness that he wanted us to. There is strict discipline,” says Ziona’s eldest son Parlian, 50, who is married and has nine children of his own. Parlian’s mother, 64-year-old Chalthiangi, presides over the kitchen and the household.

Eight other sons of Ziona are also married and live in the house with their wives and children, while the other sons live in a common dorm or with their respective mothers.

Ziona has 50 daughters, some of whom have married and moved out with their husbands. The elders share the responsibility of looking after all the children and infants. Everybody helps everyone else out, be it with caring for an infant, washing, cleaning, cooking, or tending to the ailing in the house.

Cooking—that’s perhaps the biggest and toughest chore in this house. The kitchen, which one passes on entering the expansive main hall of the house, stirs to life at daybreak. Breakfast—a heavy meal of rice, vegetables and meat for all Mizos—is served between 8 and 10 am. Lunch is a placid affair with soup, bread, tea or other snacks made throughout the day. “The ladies make whatever any other family member likes to eat at any time of the day. Preparations for dinner start early afternoon and we start having dinner from 5 pm. Most of the children eat together, while adults have their meals in batches,” says Parlian.

Fifty kg of rice, 35 kg of meat and at least 20 kg of various vegetables get cooked for every meal! Food, and running this jumbo household, must surely cost a lot of money. “We all work, in making furniture, utensils, on the farmlands or in our own businesses, and we give all our earnings to Pu Ziona. That’s enough to run the entire household. Pu Ziona allocates money to each married couple for their own needs,” adds Parlian. There’s never any quibbling over money and material comforts; everybody is content with whatever he or she gets.

Donation, be it in terms of money or labour, is another striking feature of this sect. All children, including those from Chhuanthar Run, assemble on the main street of the village at 4.30 am to pray and then sweep the streets before returning to their homes to study, have breakfast and go to school.

Mondays are reserved for community service. “We don’t work at our own farmlands or workshops on Mondays. The village elders draw up a work list and allot work to everybody. Usually, it is repairing someone’s house, working on a farm plot or dairy of a person who’s ill, or cleaning the village, or repairing a road, or some other community work,” says Lalrinthanga. All members of the sect donate 10 per cent of their earnings to Pu Ziona for running community service and charitable projects. What’s more, villagers share their farm, dairy and poultry produce with each other.

“There’s no poverty here because we share everything,” says Parlian. In fact, this village is one of the most prosperous in the state, thanks to the villagers’ enterprise and skills in carpentry and making utensils. “We’re one big, happy, large family,” says Rinliana, a broad smile lighting his wrinkled face. Smiles and laughter are a common trait here. And not least because there are a lot of celebrations throughout the year.

Sundays are not sombre here, unlike other Christian villages. The people of Baktawng pray at their local church, called Hnam Thlan Run Pui (‘House of the Chosen Ones’), adjacent to Pu Ziona’s mansion, throughout the day every Sunday and then sing and dance in the evening. Apart from Christmas and New Year’s, they also observe the death anniversary of Pu Chana (27 February)and that of Pu Khuanga (30 March), celebrate the formation day of the sect (12 June) as Bawkte Kut, and Pu Chana’s birthday (27 October), besides holding a month-long local football tournament that’s participated in by 84 teams, all of the village, every February. But the grandest fest is a three-day one to celebrate Ziona’s birthday on 21 July that sees all followers of the sect descending on the village to rejoice and make merry.

Another distinctive quality that sets the followers of Chana Pawl apart is their honesty. “Many from this village are serving as doctors, engineers, bureaucrats, teachers and technocrats in various organisations, including the armed forces. They are all reputed for their honesty and hard work since these are the traits that are valued the most in our sect,” says Lalrinthanga proudly.

The sect has many other things to be proud of, one being academic success. “We have two high schools here in Baktawng and all candidates pass the board exams every year, many with distinction,” he adds. That makes it the only village in Mizoram with this honour.

All said, Baktawng is truly one of its kind in the world.