Traffic blockades in Kolkata are part and parcel of the city’s daily routine. If there’s a cause, you can be sure there’ll be a holdup. 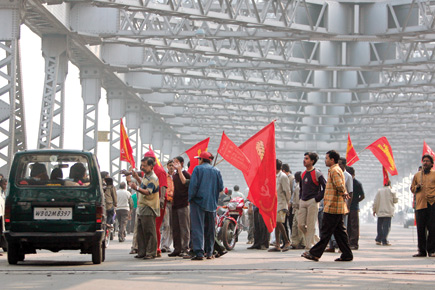 Traffic blockades in Kolkata are part and parcel of the city’s daily routine.


Eighteen demonstrations, three rallies, two political meetings and three sit-ins. All in the course of one day last week, and, what’s more, all on Kolkata’s clogged streets. That day was not an extraordinary one; every frustrating day, roads are commandeered by political parties, organisations and groups of people to vent their ire on issues ranging from ‘US imperialism’ to clogged drains.

Last year, this city suffered 4,100 disruptions, minor and major. The figure for the first two months this year is 734. In a city with just 6 per cent road space and one of the highest vehicle densities in the country, such protests, meetings and processions on the roads only spell frustration for millions of hapless motorists and commuters, besides crippling Kolkata’s work culture and its already weak economy.

Take the case of that particular day last week: the Communist Party of India-Marxist (CPM) took over one flank of an arterial road that skirts the city’s fringes to hold a meeting to ‘save’ an 89-acre plot from being taken over by land sharks; the Trinamool Congress held another on a road in the city’s busy Esplanade area to protest alleged CPM attacks on its cadres; the Bharatiya Janata Party (BJP) staged demonstrations at 13 major traffic intersections to protest price rise; clashes between members of the Students Federation of India (SFI) and Trinamool Chhatra Parishad in three colleges across the city spilled onto the streets outside them, thus disrupting traffic on those important thoroughfares for over an hour; residents of two areas suffering from water shortage and clogged drains blocked roads, and Maoist sympathisers staged sit-ins at three street corners to demand a halt to ‘Operation Green Hunt’.

Traffic police officers tell Open that the combined effect of all these disruptions that day was mind-boggling—more than 500,000 vehicles stranded all over the city. “These disruptions would have delayed each vehicle’s journey by at least an hour,” the officer adds. That means all those in the 500,000 vehicles—considering that many were buses and taxis, an average of 15 persons per vehicle would mean 7.5 million persons—lost an hour each that day. Hence, 7.5 million man hours went poof!

Multiply that by 365 days and the enormity of time wasted travelling through Kolkata’s streets every year becomes clear. On days when major political parties hold their road shows, the sufferings and losses are magnified many times over.

Kolkata has, for long, been known as ‘michchil nagari’ (city of rallies) and large sections of its citizenry are, inexplicably and unbelievably, proud of it. “Kolkata has given birth to and nurtured thousands of movements. Since the British days, this city has been the cradle of protests and mass movements. That legacy lives on. Protests seems to have become Kolkatans’ second nature,” says historian Sumit Majumder.

While protests are a given in any democratic set-up, it is the act of protesting only on the streets that is unique to Kolkata, and Bengal. “It seems that all forms of public demonstrations hold no meaning if they don’t disrupt others’ lives,” says a senior European diplomat who does not want to be named, “The effectiveness of a rally or a protest here is judged by the degree of disruption it causes, by the amount of harassment and suffering it has inflicted on people. This is amazing and springs from a perverted notion of the right to protest. If you have a right to protest, I also have a right to free movement. This is something that Kolkatans and the politicians here don’t realise.”

In fact, politicians here have no qualms in boasting about their ability to immobilise the city. Even CM Buddhadeb Bhattacharjee, his ‘do it now’ slogan notwithstanding, told his cadres to bring everything to a halt in Kolkata (“Shohor ke achal korey din”) by flooding the city’s roads for a massive Left rally held last month. The CPM finds no dichotomy in its Chief Minister speaking about improving work culture and asking cadres to bring Kolkata to its knees.

“Rallies are integral to democracy. You cannot thwart people’s movements and deny their rights to demonstrate in the name of ensuring smooth movement of traffic. And anyway, the inconvenience our rallies cause to traffic and people is minimal,” says senior CPM leader Rabin Deb, suggesting that spending hours caught in traffic jams caused by meetings, rallies and demonstrations is the price to be paid for democracy!

Sociologist Bidhan Kumar Bhattacharjee says that politicians are primarily to blame for popularising this culture of blocking roads: “Politicians and political parties have shown the way, and everyone else, from an association of teachers to even a group of citizens having some grievance or demand, blocks roads… Nobody is bothered about the inconvenience they cause to others. This is also a reflection, and extension of, the poor civic sense and overall irresponsible attitude of Kolkata’s citizenry.”

What is also very strange is that the millions who are severely inconvenienced by such disruptions every day barely murmur a protest. “That’s because most would not be averse to staging such demonstrations or protests themselves, and also because it has become a part of life here,” Bidhan Bhattacharjee says.

The favourite spots for political parties and organisations to stage demonstrations are the Metro Channel—a flank of the vital Chowringhee Road near Esplanade—and the neighbouring Rani Rashmoni Road. Kolkata Police routinely grants permission to hold demonstrations here, and nearly 200 were held last year. “We’re helpless. This has become part of the culture here and any attempt on our part to put a stop to this (holding meetings and demonstrations at Metro Channel or Rani Rashmoni Road) would invite strong opposition,” says a senior Kolkata Police officer.

With the CPM and its affiliated organisations holding meetings very often at these two venues, there’s little the police can do to stop this practice. And denying other parties or organisations permission to use these spots and, thus, disrupt traffic, would invite charges of bias. It is at the Metro Channel that Mamata Banerjee staged a hunger strike on a large platform erected bang in the middle of the road to protest against land acquisition at Singur. For the 26 days that she fasted, this stretch of road turned into a nightmare for motorists and traffic cops. And Mamata went on to reap a rich political harvest from this.

The fallout of blocking roads and traffic and disrupting daily life of millions in Kolkata is often very rewarding for disrupters. That’s why the 1,404 km of roads in Kolkata (to Delhi’s 25, 998 km) have ceased to be thoroughfares. And Michchil Nagari is stuck in yesterday.