The Bandra-Worli sea link, the country’s most astonishing bridge, is ready to open after an astonishingly long wait 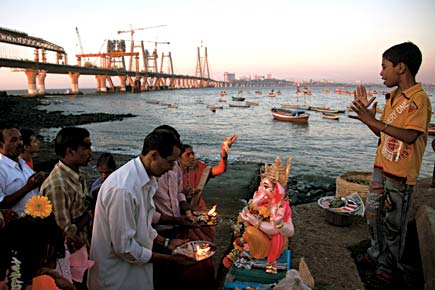 The Bandra-Worli sea link, the country’s most astonishing bridge, is ready to open after an astonishingly long wait


The Bandra-Worli sea link, the country’s most astonishing bridge, is ready to open after an astonishingly long wait

ON THE ROAD link that will soon connect Bandra to Worli across Mahim bay, 15 men swept, tarred, and patted a stretch no longer than 5 metres with uncommon urgency. Noxious tar, fresh off a machine that rolled forward, steamed beneath their feet. A vast expanse of concrete ready to be layered with tar loomed ahead, stretching out to a distant point. Spurred by a deadline already gone by, they pressed on without a break from their gruelling work.

Like them, other teams were at work in a hurry on the bridge. Above everyone, and everything—including the giant launch trusses that lift segments of the bridge into place for alignment—rose the main towers of the sea link and converged at a point 125 metres above the roadway. And behind them, higher than the towers, stood a crane. Ten years after it was commissioned, the link is yet to be finished.

The world was a different place when the bridge was a gleam in a politician’s eye in 1999. The Bombay Stock Exchange sensex had just crossed 4,000 then, and Mohammad Azharuddin was still India’s cricket captain. The announcement came that year: a cable-stay bridge would be built across Mahim bay. A regular beam bridge would have done just as well, but the requirement was specific; a cable-stay, with its single tower and cables fanning out, serving as a shimmering focal point. So a city bereft of modern icons commissioned the construction of an iconic structure, for Rs 665.81 crore.

Since then, the bridge has been discussed for its utility. Mumbai is an up-down city, and the existing roads that connect the city’s northern suburbs to the south are no longer enough for traffic to flow smoothly. On days when roadwork, errant pedestrians and malfunctioning signals come together, a 30 km trip from the northern suburb of Andheri to South Mumbai stretches to three hours. On good days, an average speed of 15 kmph is considered lucky. The makers of the bridge have said that it will cut down travel time by 30 minutes, about 85 per cent, calculating that it takes 35 minutes to drive from Worli to Bandra on existing roads. The minimum speed permitted will be 80 kmph, and motorcycles will be denied entry at the toll booths. The bridge is part of the Western Freeway, which will eventually run from Bandra or Versova to Nariman Point.

THE PRICE OF A DREAM

Ten years later, in early June, two senior structural engineers with no relation to the project sat across a table piled with vellum scrolls in their office, analysing costs on a calculator. Both are renowned in Mumbai’s architecture circles for their thoroughness. “Let’s see,” one said. “You’re saying the bridge is 4.7 km long, and has two carriageways roughly 13 metres wide?” At a total cost of over Rs 1,800 crore, one engineer tapped in the numbers to come up with a figure of Rs 15 lakh per square metre. “Fifteen lakhs?” They looked at each other and smiled. “Seems a little high. Say, how much was the bridge at Dadar? Wasn’t it around 1.5 lakh per metre?”

Of course the difference between a sea bridge and one on land is obvious. The structure that stands today bears only slight resemblance to what was originally planned. There was to be one carriageway and one tower at the main span. Now there are two carriageways and two towers. The Worli bridge went from arch bridge to a smaller cable-stay. “The design changed by 85 per cent,” says a spokesperson for HCC, the construction firm. “We had nothing to do with it. They (MSRDC) just gave it to us.”

Sverdrup, the original consultants, were replaced by Dar Consultants, whose managing director, S Srinivasan, is renowned for his bridge designs. According to a scathing Comptroller Auditor General (CAG) report, Dar laid down the condition that the bridge design needed to change if Maharashtra State Road Development Corporation (MSRDC) wanted his company on board for the project. This pushed up costs significantly: over Rs 55 crore to change the single tower to a twin tower, according to the CAG report. Asked why the design change was necessary, a Dar spokesperson replied, “Ask the MSRDC. Ask the chief minister.”

In any case, the bridge is already iconic. Lovers on a nearby promenade have a focal point. Lovers park cars on roads not yet linked to the bridge. A rickshaw driver’s family emerges from the three-wheeler for an outing that consists primarily of gazing at the bridge. “There’s no question about it,” says Professor Akhtar Chauhan, dean of Rizvi School of Architecture, “It’s an iconic structure.” Chauhan believes the bridge’s design would stand out in any city. “It’s possible to have a more poetic design,” he says, laughing, “I would have focused on protection during the monsoons with, say, a series of shell-like structures, but it’s by no means an ugly structure.”

Architects, with naturally strong opinions over what constitutes good architecture, expressed their excitement about the bridge. Chauhan says he looks forward to driving across it to take in the view—rough sea on one side, tough city on the other. Rahul More, whose firm Opolis Architects specialises in eco-design, says he’s as expectant as his children. He plans to jog to Worli from his home in Bandra East. But pedestrians aren’t allowed, HCC officials say.

WHOSE LINK IS IT ANYWAY?

And there’s the rub. The bridge gives its users a new perspective of Mumbai. It takes them away from the city’s grind, on a joyful tour above the chaotic cluster they came from, before plunging them right back into it. The people who need it most, those deprived of space, will find it hardest to see this city from a distance.

What they will miss is an unremarkable skyline made of tall and small buildings, ramshackle huts of tin and aluminium, and communications towers. They will miss the glass twin towers mounted with triangles at Prabhadevi. Over Worli, the morning railway scene of men and women squatting and exhibiting their bottoms to passersby will repeat itself at the fishermen’s colony. To be on the bridge is to step outside city life and examine what it all means.

The sea link approach road curves into Worli, first passing under the enormous tower with four concrete legs (each about 80 sq ft thick) and white cables that stretch out in a fan. Further down is the next cable-stay tower, a smaller but no less intimidating structure. It looks less a bridge than two razors angling in. The road then splits, with an artery winding smack on to Worli’s sea face, whose residents are somewhat annoyed by the obstruction of their view and the potential noise.

More, who visits Worli regularly, says, “These are things we needed. But the problem is that there’s no equal distribution of traffic. If the bridge led all the way to Nariman Point with arteries connecting Worli and Haji Ali, it would have been fine. Right now, it’s going to be a disaster. There will be some choke point because the same level of traffic is heading to one point anyway.” The next phase of the bridge, which will deposit cars all the way to Haji Ali, near the dargah, will soon begin. At the same time, work between the dargah and Nariman Point will commence.

For another few years, Mumbai will be in turmoil. But the bridges of this phase aren’t likely to take as long as the first phase, when the government agency had found itself wrapped up in objections that resulted in years of delay.

At the time, fishermen and environmentalists argued that the bridge would affect the Mithi river’s flow as well as fishing areas. The MSRDC, an HCC spokesperson said, was now going to make sure all objections were cleared before starting work. This didn’t stop one environmentalist from insisting that the bridge’s effect on fishermen’s catches would be seen only a decade later. And no matter what, it won’t stop residents of Shivaji Park claiming that the spate of dead dolphins appearing on beaches is due to the structure’s foundations. This is one troubled bridge.