An Atheist in Exile

After he exposed a ‘miracle’ in Mumbai, multiple FIRs were registered against Sanal Edamaruku under a blasphemy law. Expecting arrest, he fled the country and has now lived abroad for a year 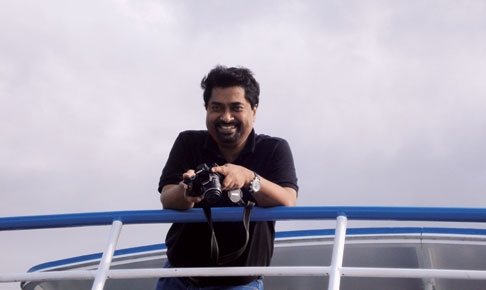 Multiple FIRs were registered against Sanal Edamaruku under a blasphemy law. Expecting arrest, he fled the country and has now lived abroad for a year


In one of the many lanes off Mumbai’s SV Road—that all-important artery connecting the city’s central region with its western suburbs—there exists an otherworldly place. Five minutes into Vile Parle’s Irla Lane, all the traffic disappears. There are no plush offices here, no towering buildings. Instead, large banyan trees line the sides of the roads, small crosses at intersections remind residents of their faith, and people live in small single floor homes with sloping roofs. This is a village of East Indians, the original inhabitants of Mumbai.

A little over a year ago, for a span of a few days, this sleepy hamlet transformed into nothing less than a carnival. People from various parts of the city, from a cross-section of religions, thronged the area for days, waiting to see a sign of god. The feet of a statue of Christ had started to drip water. For five days, water oozed out of Christ. In the glare of media channels transmitting this miracle live, people started collecting what they termed holy water. (Later, when their stock was running out, they increased it by adding ordinary water.) As the crowds increased, tarpaulin sheets were set up to shelter the faithful, chairs were organised for the elderly, all-night vigils began to be held, and, as with all good miracles, myths began to bloom. It was said that a few years ago, a tree fell at the spot, and while houses nearby were damaged, not a scratch befell the statue. People were said to have been magically cured of a variety of illnesses by the water. Two women over 60 years of age, one from Wadala and another from Khar, came hobbling on crutches, residents said, and after a sip went home with their backs ramrod straight.

The ‘miracle’ was first noticed not by a Catholic, but a Hindu woman. This pious lady, Sharda Parmar, always started her day by bowing to the statue. “Nothing was there when I reached that morning. It was when I was praying that I felt the first drop,” she says. Even after the dripping stopped, villagers had strangers knocking on their doors asking if they could share a few drops with them.

Delhi-based atheist and rationalist Sanal Edamaruku was contacted by a television news channel on the evening of the miracle’s first day to offer a rational and scientific viewpoint. Edamaruku, who heads Rationalist International, a group devoted to promoting rational thinking and a scientific temper, has spent more than 30 years travelling across India to debunk myths and superstitions. He stated on the channel that the alleged miracle was likely to have a scientific explanation—that, for all one knows, a hole might have formed at the top of the cross from which water was now seeping into the torso of the statue. Furious Catholic groups challenged his views and Edamaruku visited the spot a few days later to investigate the matter.

According to him, the day he arrived at the site there was no water dripping. However, priests from the nearby Our Lady of Velankanni church were conducting a mass, and distributing from a bucket the ‘holy water’ they had collected, mixed with mineral water. On TV the same evening, he explained that the statue is located close to a manhole and a drain. There is a wall that lies between the statue and the drain. According to Edamaruku, water from the drain made its way up the cross through capillary action and leaked out through the nailed hole in the feet. Capillary action is the scientific term for the ability of liquid to flow in narrow spaces without the assistance of external forces like gravity. Often, this ability manifests itself in opposition to gravity, as Edamaruku suggests occurred in this case. Various Catholic groups on the television show’s panel were furious. Like many TV debates, it spiraled out of control and the topic turned to Christianity and the superstitions associated with it. When Edamaruku refused to apologise for his comments, one panelist threatened to file a police case against him.

Edamaruku recalls that after the discussion was over, the news channel suggested he remain in the studio for a while. Those on the panel had reportedly gathered a number of people outside to beat him up. He left late in the night from a back door and switched off his phone till he reached Delhi the next day. As promised, two FIRs were soon lodged against Edamaruku. They were both filed under Section 295A of the IPC—India’s blasphemy law, which punishes anyone who outrages a religion or the religious beliefs of another individual. It is a non-bailable offence and carries a maximum punishment of three years, plus a fine. A few years ago, an Andhra Pradesh author and translator with the pen name Krantikar was arrested under the same section for translating some of the works of Taslima Nasreen into Telugu. Another incident occurred late last year when, under the same section and Section 66(A) of the IT Act (related to sending offensive messages through a computer or communication device), two girls in Mumbai were held by the police for questioning the shutdown imposed during Bal Thackeray’s funeral.

According to Edamaruku, he started to receive threatening calls from a policeman in Mumbai on a daily basis.

These calls were always late in the night and from a mobile phone. He applied for two anticipatory bails—one in a lower court in Delhi and another in Mumbai’s High Court—but both were thrown out on technical grounds. During the Delhi court hearing, lawyers representing the Catholic groups argued that his case had to be tried in Mumbai. In Mumbai, the High Court decided that his case should first be heard in a lower court. Meanwhile, according to Edamaruku, friends in Mumbai closely connected with the Church and Catholic groups, told him there was talk of getting people to forcefully bring him to Mumbai to get him arrested. He was also afraid that a fanatic might try to murder him. Edamaruku went into hiding.

He spent the next month and a half living in student hostels and various friends’ homes. He stopped driving his car. While he was hiding in a post-graduate hostel, he would live in a room with the door latched from outside. When it became likely that he would soon be arrested, he flew to Helsinki in Finland.

Edamaruku has now spent over a year in Finland. “I have travelled to some of the most backward and rural areas of India to expose myths and superstitions. But I have never faced a situation like this. One would assume that people in Mumbai would be more sensible and tolerant,” he says on the phone from Helsinki. He says he wants to return to India but as the situation stands, he will get arrested without bail here.

The church in Mumbai, on the other hand, has refused to get involved. The archbishop of Mumbai issued a press statement last year, stating that the Cardinal was out of the country when the issue of the Irla cross surfaced and that he was in no way connected with the filing of the FIR. However, he did make an appeal. Not to the groups to withdraw the FIR, but to Edamaruku to issue an apology for his comments. After this, he suggested, the FIRs should be withdrawn.

Judith Monteiro, a public relations professional who holds the position of secretary with the Association of Concerned Catholics (AOCC), one of the groups that filed an FIR, is adamant that they will not withdraw it until Edamaruku issues an apology. “Yes, he has freedom of speech and expression. But we also have the freedom to express our faith,” she says. “When someone comes to stab you, won’t you act against [them]?”

AOCC has, in the past, taken film producers to court for objectionable scenes depicting the Christian community. They got Kamaal Dhamaal Malamaal to delete a scene which showed a Catholic priest dancing with a garland of lottery tickets around his neck and the church in the background. They also took on the makers of Kya Super Kool Hai Hum for showing a Catholic priest solemnising the marriage of a dog and a bitch, and reciting prayers and sprinkling holy water upon two dogs while they mate. According to Monteiro, what upset them was not Edamaruku claiming the miracle was false, but his attack on the church. “We won’t tolerate it,” she says.

Edamaruku was born in Kerala to a Christian-born father and a Hindu-born mother. They were both rationalists and had adopted the name of their village—Edamaruku. His father was excommunicated from the church for questioning the concept of Immaculate Conception in a book he wrote. When his mother was nine months pregnant, she had been invited to his father’s house for the birth. There, his family tried to convert her to Christianity. Edamaruku’s parents left the house, even though it was raining and his mother had gone into labour. Edamaruku was born outdoors. This, however, was not the reason that he became a rationalist-activist.

That came about when he was around 15 years of age. A young girl in the neighbourhood who was known as an athlete had developed blood cancer. Her family, despite pleas by various individuals and newspapers, refused medical treatment and instead tried to ‘cure’ her with prayers. “Her death completely shook me. I resolved to do something about it,” he says.

Now, having been forced to escape the country, Edamaruku says he has found a larger audience for his message. He has been on lecture tours, speaking against superstitions across Europe. When he spoke in Belfast during the last week of November 2012, a group of atheists invited Edamaruku to visit the village of Ballinspittle to explain the case of the famous ‘Moving Mary’ statue. The statue was first reported to have moved in 1985. Over the years, the spot has attracted large numbers of pilgrims, and reports of its movements have continued to surface. Armed with a laser beamer on a tripod directed at the statue’s head to see if any movement occurred, Edamaruku recorded the proceedings. No movement was observed. According to Edamaruku, such ‘movements’ occur because of an optical illusion. “If you stand still in darkness and fix your eyes on an object some distance away, and count, say, up to 3,000, it is likely that you [will] find that fixed object swaying,” he explains. “But you know what was most interesting? Nobody took offence.”