The Sarkaiguda encounter has set off a familiar drama. Activists say the people killed were innocent. The police say they were dangerous. Neither have much regard for facts 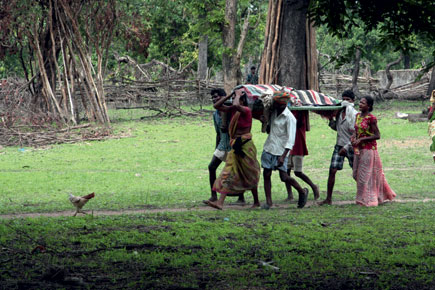 The Sarkaiguda encounter has set off a familiar drama. Activists say the people killed were innocent. The police say they were dangerous. Neither have much regard for facts


ENCOUNTER The Central Reserve Police Force (CRPF), involved in the 27-28 June encounter in Sarkaiguda village of Chhattisgarh’s Bijapur district, has so far stood by its claim that the 19 people who were killed that night were either Maoists or their sympathisers. The state police, accompanying the CRPF troops when they allegedly came under fire from Maoists in Sarkaiguda, have said that four among the dead and one injured villager had criminal records. The four dead people with alleged records have been identified as Markam Suresh, Madavi Eiatu, Markam Nagesh and Korsa Bijjey. Of the four, Markam Suresh, aged 35, has been labelled the ‘mastermind’ of a 2007 Dantewada jailbreak in which 299 prisoners escaped, including him.

An investigation by Open, however, reveals that right after the jailbreak in December 2007, the police had named a Maoist commander Sujit Madavi as the main accused. According to the police version of the event back then, it was Madavi who along with another Maoist overpowered two constables and shot them with their own rifles. Later, the police had also charged the jailor, Bhuvneshwar Singh Mankar, with aiding the prisoners in their escape; the jailor was absolved of all charges in 2009 by a sessions court in south Bastar.

Suresh’s involvement in the jailbreak has been rubbished by social activist Himanshu Kumar, who ran an ashram in the neighbouring Dantewada district for 17 years before it was demolished by the state administration three years ago. He says Suresh had come to see him after he ‘escaped’ from jail in 2007. “He had been arrested on some flimsy charges in April 2007,” he claims, “and when Maoists attacked the jail, Suresh just walked his way home, which is where he had been staying till he was gunned down by the CRPF.”

There are several others left dead by the encounter of 27-28 June whose innocence villagers in the area testify to. Markam Nagesh, they say, was a dholak player who used to play at marriage celebrations. He was just 15 and studied in a school nearby, where he was a topper. Madvi Eiatu, these villagers say, was just a farmer. Among those killed was a 15-year-old girl, Kumari Kaka.

On its part, the CRPF says that the incident in Sarkaiguda was a chance encounter. According to a senior officer, 12 days before the event a senior intelligence officer from Andhra Pradesh had come visiting the security top brass in Chhattisgarh. He had brought news. A military company of the CPI (Maoist) from its Andhra-Orissa bureau had sneaked into Chhattisgarh from Sukma for the first time in two years. This movement was significant, as the officer feared that the company (of around 60 guerillas) might have been sent for a major attack against security forces.

The guerillas were first spotted along the Jagdalpur-Dantewada highway, and they later retreated into Bijapur district’s mining belt. It was soon discovered that the company had set up a temporary base in the district’s Silger forest area. On the night of 27-28 June, about 800 security personnel—comprising CRPF soldiers, Cobra commandos and forces of the state police—set out for Silger in three different groups.

According to the senior CRPF official, one group that had left from the neighbouring Dantewada district was fired upon by a squad of Maoists near Penta.

In the ensuing crossfire, the CRPF claims to have gunned down two Maoists: 24-year-old Sodi Dulla, who according to the CRPF was a platoon commander, and Markam Laccha, whose age could not be ascertained.

The encounter in Sarkaiguda village of Bijapur district took place soon after that. According to the CRPF, as its men were passing through the area to neutralise the Maoist guerillas thought to have pitched camp in Silger, they were fired upon by Maoists who had assembled a group of people for an open-air meeting there, people from Sarkaiguda and two other villages, Kottaguda and Rajpenta.

That attack by Maoists, says the CRPF, injured five Cobra personnel and one of its own soldiers. The CRPF claims they were hit by pellets of bharmar guns, country-made firearms that are used by villagers who owe allegiance to the Maoists’ Jan militia. In response, the security personnel fired back in the darkness.

It was 1 am. In the ensuing chaos, the CRPF says it arrested three injured Maoists who were sent for medical treatment along with the injured security personnel. One of them died in hospital. In the wee hours of the morning of 28 June, 16 other bodies were found. Two of them, CRPF officials say, were wearing military fatigues. The CRPF also claimed to have recovered three bharmar guns.

On 3 July, a few days after human rights groups accused the security personnel of staging a fake encounter, CRPF Director General Vijay Kumar met the Union Home Minister P Chidambaram and reportedly told him that under fire as the CRPF’s men were, no one should expect them to ask their assailants for identifications before firing back.

A day later, Chidambaram gave a clean chit to the CRPF, saying that though he felt sad at the loss of lives, the force had acted in complete transparency. According to a PTI report, the Home Minister quoted the CRPF DG as saying that if CRPF soldiers suffer casualties in the dark of a jungle, Standard Operating Procedure requires them to open fire.

There are also reports, though, that the CRPF has launched an internal inquiry. But the CRPF’s Inspector General of Operations Pankaj Kumar Singh has downplayed this. “Whenever firing takes place,” he said, “we always launch an inquiry.” Singh also said that CRPF troops now move around with modern equipment such as GPS systems and hi-tech wireless sets, and that it’s not possible to “fiddle with digital footprints”.

It was in March this year that the CRPF entered the Maoist base area of Abujhmaad for the first time in 30 years. Since then, the CRPF has expanded and intensified its offensive in Maoist bastions. Sources say that once the monsoons are over, a sustained anti-Maoist operation will be launched in the so-called ‘red corridor’.

The three villages that suffered casualties are among those that were rendered ghost villages—with civilians having fled for their safety—in 2006 when the Salwa Judum had mounted an aggressive operation in the area against Maoists. Having returned, these villagers had been trying hard to pick up the pieces of their lives. No doubt, there has also been significant Maoist presence in this area. While it is clear that innocent people also lost their lives, it is evident that the firing of 27-28 June took place from both sides. In the end, both the State and Maoists claim to be working for the upliftment of Adivasis. But unfortunately, it is they who end up as casualties in this war. And neither the State nor Maoists can be absolved of their role in the killings.