There are no OB vans covering the crisis in Odisha. And the government’s response is terribly inadequate 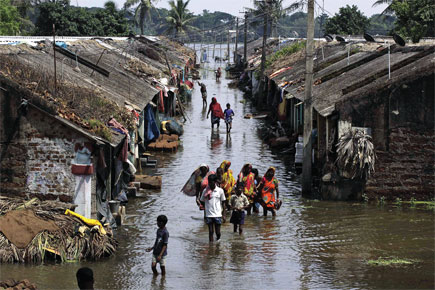 There are no OB vans covering the crisis in Odisha. And the government’s response is terribly inadequate


CHANDMAHILA, ODISHA ~ In a matter of three minutes, it was all over. In the Gop block of Odisha’s Puri district, 45-year-old Sanaullah Khan had just laid his prayer mat next to his wife, when they heard shrieks outside. By the time they reached the door of their modest hut in Chandmahila village, the water had gathered so much force that it blew away the door. Suddenly, Khan found himself in chest-deep water. At about 9.40 pm on the night of 10 September, an embankment along the Kushabhadra, a sub-tributary of the Mahanadi river, was washed away. What was to follow was nothing short of a catastrophe. Khan somehow managed to save himself and his wife and children, and together they sought refuge on the roof of a pucca house in the village. They waited there, without food or water, for some government agency to come to the rescue. For 24 hours, they just waited.

On the night of 11 September, the children started crying in hunger and thirst. Khan couldn’t just wait and watch. Gathering seven other men similarly stranded on rooftops, he descended, and the group went out in search of food and water for their families. Just outside Khan’s own hut, six of them managed to swim across a very strong current of water. But Khan was swept away. The man behind him, Golan Ahmed just watched helplessly as his neighbour’s body was swallowed by the angry waters.

The flood receded after a few days. But government relief reached Chandmahila village only after six days. That says a lot about Odisha’s disaster preparedness, since the village is only 60 km away from the state capital Bhubaneshwar. Even after six days, all that flood survivors have got is some rice, rice flakes (chiwda), sugar, and a sheet of tarpaulin per family. “Tell me, how does the government expect anyone to live on 2 kg of rice and 250 gm of sugar in nine days?” asks Rehmat Shah, a resident of nearby Kushupur Basti.

It is unlikely that these villagers will ever recover their normal lives. Most are only left with whatever clothes they were wearing when the floodwater came in. All over, pillows and clothes and utensils float around, or lie half buried in muddy slush. Golan Ahmed sits on the boundary of the field where the current swept Sanaullah Khan away. “My daughter is almost 17, and I had been preparing a wedding trousseau for her: a few gold items, utensils, clothes… all that is washed away,” he sighs. “And that kaanch ka set (glass set),” his wife reminds him. Also gone are his three cows and a coop of hens. “My LG television is gone,” somebody shouts from behind. “And my Godrej almirah,” yells someone else.

Even on the ninth day, of the 136 villages hit by floods in the Gop block, relief has reached only 92. This means that in 44 villages, not even the meagre handouts have arrived yet, and this is just a couple of hours away from the state capital.

Making matters worse is the dread of disease. At the Community Health Centre, people have been queuing up for various ailments caused by floodwater. “Skin infection is rampant, and so is viral infection. There have been a few cases of diarrhoea as well,” says the doctor in charge. Now that the water has receded, an epidemic is very likely in the affected areas. “We are trying our best to reach out to as many people as possible. We can prevent the outbreak of an epidemic if we provide the affected villages safe drinking water,” says Dr SN Behra, the in-charge of the flood control cell in Gop block. According to him, the state government has been distributing pouches of water in all affected villages. But there is no sign of these in Chandmahila, or even the villages around. The few that have made their way to villagers here were handed out by private charitable organisations. In the case of Muslim settlements, it was done by a “Muslim unit”, as people refer to it. In a Dalit basti nearby, no such pouches have been made available so far. To quench their thirst, the 300 odd people living in this settlement are still at the mercy of a sole handpump that lay submerged in floodwater for days. Thankfully, some of the houses are still intact here, but they could crumble any time. For shelter, all people have are tarpaulin sheets, used as makeshift tents right outside their damaged huts. “I have just eaten two biscuits since morning,” says Akhi Boi, a 60-year-old whose son has gone to the police station, where he was told some relief material was available.

In all, more than 3 million people have been affected by floods in 19 districts of Odisha. So far, 39 people are reported dead, while nine are still missing. About 125,000 houses have been destroyed, while crops on 215,000 hectares have been wiped out. All over the affected areas, the moment one enters a village, one is swarmed by villagers hoping to see government officials turn up with emergency supplies. Some expect officials to assess the damage they have suffered and pay them sums of compensation accordingly. “This house took us Rs 80,000 to build,” says Salima Bibi, pointing at her hut. Its walls have crumbled, and whatever little she owned now lies buried beneath the mound that was her home. The family now waits for a revenue inspector to come and assess the damage. “I hope they give us at least Rs 80,000 to rebuild this house,” prays Salima Bibi.

In Kushupur Basti, Sanaullah Khan’s widowed sister, Suratan Bibi has no time to mourn his demise. She has her own tragedy to get over. Her house was the first to take the brunt of the floodwater, as it stood along the road. It was completely wrecked. Her husband had died a few months after the cyclone that devastated Odisha in 1999. At that time, she says, she was promised a house under the Indira Aawas Yojana, but it’s yet to materialise. “Small-time leaders here have been asking me for a bribe before they recommend my name for that house. What could I possibly offer them?” she says, sitting on her haunches in the courtyard of her neighbour. “My cow also died. She was five months pregnant. And my brother died too,” says Suratan Bibi, as she nibbles a Parle-G biscuit. There are no OB vans to record her tragedy.