×
Web Exclusive: A letter from Bailha

Accidental death of a woman foretold 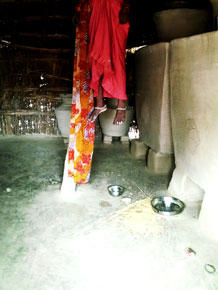 There is a stillness in the village, the kind of high strung lull that inevitably breaks into chaos given the first chance. Our car reaches a screeching halt in the middle of a mud lane; we have travelled to Bailha, a nondescript village on the way to Lakhimpur Kheri, to investigate a hanging. Accompanying us is the victim’s family, silent and cowering at the tragedy of their loss. Save for a few people sitting under a lone bougainvillea bush that provides respite on the hot summer day, Bailha might as well be a ghost town.

We have repeatedly been told that the deceased had been married into a well-to-do family; and so we instinctively search for some signs of prosperity amongst the thatched huts and mud walls. But when the victim’s father tugs at us and gently leads the way, it becomes evident that prosperity too is a matter of perspective. We find ourselves standing in a small courtyard, surrounded by four very small huts. One serves as a kitchen, while the rest are used as bedrooms and storage spaces.

For a while, all of us stand still; and a loud wailing is coming from a corner hut that we then walk into.

From a narrow wooden beam hangs a girl, half clothed. Her mouth is slightly ajar, and her feet sway in the wind, arms frozen slightly akimbo, like a rag doll in the air. Her face’s complexion is much lighter than her body, and her petticoat is tucked in at the center as if to make more leg room for sitting, the lower two buttons of her blouse slightly open. On the floor are the remains of her last meal; daal and rice are strewn on the floor. There are other things, perhaps signs of struggle; a hair clip thrown haphazardly to the ground, a broken mobile phone a few meters away, lots of broken bangles, and, the most telling of all – a round semicircle of bidis around the corpse that is hanging from the beam by a sari. Her husband and his family are absconding. “They ran when you walked in, [since] they expected just her family. Her father is a simple man and very poor. They thought it would be easy to shut him up,” says 36-year old Maltiya, a neighbour and a resident of the village.

On 29 June, I was at my parent’s farm in Uttar Pradesh, District Lakhimpur Kheri, when 17-year-old Rajvir from a nearby village—named Rikhi Purwa—bursts into my father’s room and informs him that his 16-year-old married sister was found hanging in her house in the village of Bilaha, some 50 km away. “Babuji meri behen ko mar ke taang diya,” (“Sir, they have killed my sister and hanged her”) he says, slumping into a corner against a wall. He is accompanied by his 32-year-old father Raju. They believe it to be a dowry death, and have come to my father in the hope of getting help as they are not only illiterate but also poor. My father sends them to the Pradhan of the area, who will listen to their grievances and then write a complaint on their behalf, on the basis of which an FIR can be filed. In the meantime, stories of how powerful the in-laws of the victim are start pouring in from curious villagers who have gathered on the farm. The word ‘settlement’ is repeatedly used. The victim’ grandmother repeatedly shakes her head, asking could be done in a case like this. The fact that it is a case of dowry-related death is established by the history of violence that the girl endured in her one-and-a-half years of marriage, her husband’s family often taunting her for being poor and not bringing in enough wealth. She would complain to her parents often, but her mother sent her back—as mothers are wont to—in the hope that things would eventually settle down for her.

“It was [her] mother who insisted we marry her there because she felt [that her daughter would move to] a bigger house. They were landlords. Now they have killed her and we won’t be able to do a thing.” she says.

Nevertheless, Raju comes back with a complaint, on the basis of which an FIR can be registered. A phone call is made to the SHO of the area on Raju’s behalf and he is on his way. We decide to accompany him to the Bhira police station to lodge the FIR, to observe the course of action.

Although the SHO, Ajay Kumar Yadav, is expecting him, he isn’t keen on the FIR. “Aap ki rishtedaari hai. Aaap jakar milke toh dekhiye, phir aakar baat kijiye, phir dekhte hain kya karna hai,” he says to Raju. (“They are your family members. At least go and speak to them; then we see what is to be done”).

When Raju tells him that the death of his daughter negates all ties, the SHO smirks and asks him his caste. “Gudiya hain. Gudiyan ki tarah raho. Jao pehle jaake dekho kya ho raha hai wahan. Hum tumhara FIR likh denge. Shaam ko le lena. Hummein subah se maloom hai uss kaand ke bare main.” (“You are from the Gudiya caste. Remember that—and now, go and see what is happening there. We will write your FIR; collect in it the evening. We have known of this tragedy since the morning.”)

There is a police outpost near Bailha that had informed the SHO of the case; but the police take their time to arrive. The sub-inspector, not happy with Raju’s decision to register an FIR repeatedly tells him not to pursue the case either, “poora ghar barbad ho jayega,” he says to him (“Their entire household will be ruined”). He continues, saying that cases of dowry ruin the life of not only the husband, but the entire family, and that Raju should think his actions through. Then, begrudgingly, the police make their way to the scene of the crime.

When the police arrive in Bailha, minutes after we do, the atmosphere of the village takes a turn for the dramatic. People come out in droves to watch as the victim’s body is brought down. The police debate the colour of the sari the victim had been hanging from, make fun of the size of the white sheet bought to wrap the body, and even of the right way to seal a body and eventually send it for a postmortem examination. None of the villagers are willing to speak; even refusing to name the accused. An entire society seems complicit.

We see an older man, Genda Ram, fanning SHO Yadav with a hand fan as he sits waiting for the formalities to be completed. He is apparently trying to cut a deal on behalf of the family; and the SHO is smiling in compliance. Another neighbour is advising the victim’s mother to refuse a post mortem examination as they would “just cut [the body] up and fill [it] with sawdust.” Everything seems an attempt at trying to shut the victim’s family up; the police do not even arrange for a vehicle to transport the body for the post mortem, leaving the family to make the arrangements themselves. When Raju comes back the next day, he says that even the post mortem officer at the morgue charged him Rs 1,700, “for doing a good job.”

Shortly after the cremation, the in-laws visit the Block Pramukh of Palia Kalan and asked him to oversee a settlement with the victim’s family on their behalf. When he refuses, they made way to the family themselves and offer them Rs 2,50,000 for their silence. “Aaap toh garib ho, itte paise le lo aur araam se bethkar umr bhar khao,” they told them. (“You are poor; take this money, and spend the rest of your years living in comfort.”)

When the family refuses, the in-laws talked of the misery of extended court days. “Even though we want justice, it becomes very hard as people keep pushing us to settle. But we won’t back down. We will see it through,” says Raju.

This is the third case of “hanging” for the girls of Rikhi Purwa, Palia Kalan. The earlier three were termed as suicides, and cash has exchanged hands. The block Pramukh of the area confirms the practice of out-of-court settlements, especially in cases of dowry deaths. “They are usually made to look like suicides and if they are not, neither police nor the family wants to pursue them. Mostly these deaths are covered up by mutual settlements between the two parties. Very rarely do these matters go to court.” The CO, DYSP, MK Singh of District Gola who is also an Investigating Officer (IO) in the matter is quick to refute these claims and says that these are one off, isolated incidents. “There is only one similar incident that has happened and that is in Gola, and I am investigating both matters.” No arrests have been made so far as Singh is on supposed Vidhan Sabha duty in Lucknow.

70-year-old Kaushalya of Bhira says that her daughter was killed by her in-laws in Sultanpur almost 10 years ago, but that her husband did nothing. “He was too poor. He took the money and then felt guilty, and drank all of it away. In the end it killed him. You cannot replace a daughter with money. How is it possible?” she sighs.

In the light of the new provisions of the dowry law, no immediate arrests will be made when one registers a case of dowry. Last week, a Supreme Court judge ordered the magistrate to weigh the preliminary evidence and go through a nine-point checklist before going through with the arrest that the police made in such cases, “The fact that Section 498-A is a cognisable and non-bailable offence has lent it a dubious place of pride amongst the provisions that are used as weapons rather than [a] shield by disgruntled wives.” Between 2005 and 2012 alone, 63,171 women were killed in dowry-related incidents—which translates to about one death every 60 minutes. According to the figures provided by the National Crime Records Bureau, 91,202 dowry deaths were reported in India from 1 January 2001, to 31 December 2012. Of these, 84,013 offences were charge-sheeted and sent for trial. And of all the cases, only 5,081 were reported to be false after investigation. A state-wise break-up showed that the highest incidence of dowry deaths was in Uttar Pradesh, where the rate of acquittal is higher than the rate of conviction. The death tally is above 2000 for the state in most years.

Almost a week later, the accused are still at large. The investigations have produced nothing further, and SHO Yadav has yet to look at the post mortem as he says he “hasn’t had the time.” 17-year-old Rajvir is convinced that the police have been bribed. “My cousin told me that the outpost was handed money the moment they found out. It is common knowledge,” he says, sitting on his haunches, his eyes hollowly staring into the distance. “Let’s see what happens next. They even got the Pradhan to speak for them… he is one of the witnesses. One of the few people who knows of the incident as it happened, as the family went to him to write a declaration of death so that they could cremate her. But he refused to do it until we came. Now it’s a police case and he won’t talk,” he sighs. “I don’t think she will ever get justice.”