“AAP has become a party with a supreme leader”

Prashant Bhushan, an activist lawyer and one of the AAP’s founders, talks about differences within the party, structural flaws, and how the party has deviated from the principles on which it was founded 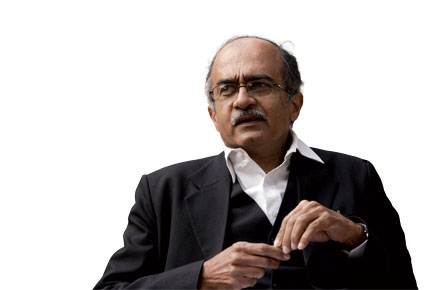 Not even a month since its historic victory in Delhi, the Aam Aadmi Party is riven with dissent. Senior leaders are complaining of lack of transparency and a ‘high command’ culture prevailing over inner-party democracy. Prashant Bhushan, an activist lawyer and one of the party’s founders, wrote an explosive letter to the National Executive of AAP highlighting structural problems and sycophancy within the party, igniting rebellion. In an interview with Assistant Editor Kumar Anshuman, Bhushan talks about differences within the party, structural flaws, and how the party has deviated from the principles on which it was founded

In recent times, many letters written by senior AAP leaders, including yours, have been leaked to the media. An AAP spokes- person calls it a ‘conspiracy against Arvind Kejriwal’.
I have not heard what AAP leader Sanjay Singh has said, since I am [not in] Delhi. The main issue is not the leak, but the content of the letter. I have written a letter to the National Executive of the party on 26 February highlighting certain facts, and since then I have admitted that, yes, I wrote the letter. Now where is the question of the letter getting leaked? As far as the ‘conspiracy’ is concerned, I am not involved in any of this.

The problems existed even before the Delhi polls. You were upset with certain candidate selections.
Yes, I was. I did raise questions on certain candidates and asked the party to look into it. If you see the charges, ranging from offering liquor to people, to putting out communal posters, to small fights, [levelled] against AAP candidates… I presented this before the party, but no action was taken.

Just before the election, your father Shanti Bhushan also raised questions on Arvind Kejriwal’s capabilities and said Kiran Bedi was a better candidate for chief ministership of Delhi.
Well, that was his view and I had expressed what I thought about it. I didn’t agree with his views, and that’s what I had said at that time. Besides, the incident of mine writing against certain candidates and my father’s statement should not be seen in unison. These are two different incidents.

Do you feel that after the Delhi win, AAP has somehow lost track of its ideals and is now behaving like other political parties?
This had started even before the Delhi polls. We always said that we’re here to change politics, not to be part of the ongoing politics. We started with some good initiatives—like putting our funding online, having an inner party Lokpal, and so many other things. But in a bid to win an election, we kept on sidelining the real agenda of the party, and that was something that has discouraged a lot of party volunteers.

You have questioned the party’s Kejriwal- centric election campaign as it had made AAP look like a one-man show.
The big question is: are we going to be the same like other political parties where one person becomes the ‘high command’ and the rest follow him? When we started, we had strong inner-party democracy and all the decisions were taken by consulting leaders, volunteers and even the common man. It was a participatory model. We talked of Swaraj, where even the lower end of society would participate in decision-making. But gradually, the party started sacrificing its principles and the decision-making was left to a closed group rather than an open forum. There is no harm in running a one-man centric campaign as it puts you in better competition with other parties. But it shouldn’t happen at the expense of… the workers. I have raised a few points as I feel it is part of our inner democracy. But the way, Arvind and his team are reacting to it and coming out with more allegations; it gives an impression that AAP has become a party with a supreme leader and followers.

You also complain of no transparency in party funds.
Absolutely. We started a good practice of putting out the donations received by us. But, in the same vein, we should also be putting out our expenditures [for public scrutiny]. It is the public that has shown trust and confidence in us, and we should fulfill the commitments made to them. Everyone has a right to know how we spend our money, how much on radio advertisements, on other forms of advertisement, and what funds [the party is left with] and how we are going to use it. We are no more a small party. With a decisive mandate in Delhi, we are setting our eyes on other parts of the country, and even people are looking at us with great hope.

What do you think the party should do now to fix the flaws?
We have an advantage of being a new party. We are not like others that have a large base and hence larger problems. Besides, we have only structural problems that need to be addressed on an urgent basis. There has been a sort of laxity in our commitment towards transparency, accountability and inner-party democracy. There should be a mechanism to regularly monitor whether we are deviating from our path and there should be a committee to take a call on what is going wrong. This should have participation from all sorts of people. Besides, decision- making should be more transparent and participatory. We have different state units and it is their call whether to contest a state election or not. The National Executive should not overrule their decisions. I think the Political Affairs Committee can be reconstituted to give representation to all groups and regions.

If the party decides to take disciplinary action against you, what would be your course of action?
I don’t have an answer to speculation. I am just a party member. Besides, I have lot of other things to do in courts and other social forums. There are people and volunteers who look up to me. I only represent them. When I see them in distress and disillusioned, I have to raise their voice. I will keep doing that. I don’t think I should add more to what I have said.